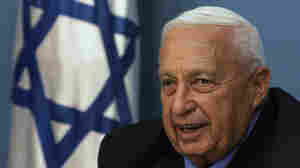 Israeli Prime Minister Ariel Sharon speaks during a news conference in his offices on Nov. 21, 2005, in Jerusalem. Sharon announced his split from his right-wing Likud party to form a new political party, Kadima. He was on the way to re-election in 2006 when he suffered a stroke and fell into a coma from which he never awoke. David Silverman/Getty Images hide caption

January 15, 2014 • The former prime minister, who had been in a coma after suffering a massive stroke in 2006, died on Saturday. Sharon's career spanned the birth of the nation and most of its essential turning points. Israelis had a love-hate relationship with him that was beginning to soften only shortly before his death. 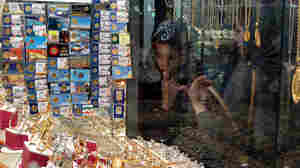 Iranian women look at a jewelry shop display in Tehran, Iran, in 2010. Iran now appears to be stockpiling gold in an attempt to stabilize its economy, which has been hit hard by Western sanctions. Atta Lenare/AFP/Getty Images hide caption

November 9, 2012 • Iran's economy has been hit hard by U.S.-led sanctions that have targeted its oil exports and its banking system. In response, Iran appears to have gone on a gold buying spree as it attempts to halt the downward spiral of its currency. 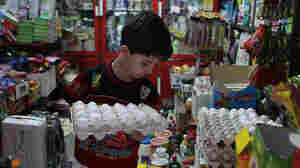 An Iranian boy holds a tray of eggs at a grocery store in Tehran last month. From Sunday, Sept. 30, to Monday, Oct. 1, the Iranian currency lost nearly one-third of its value against the dollar. Atta Kenare/AFP/Getty Images hide caption

October 22, 2012 • Reports over the weekend said the U.S. and Iran had agreed to face-to-face negotiations, but both countries deny that's the case. Still, symptoms of economic and social instability may be pushing Iran toward the negotiating table.

Russia To Go It Alone On Nuke Disarmament

October 14, 2012 • Russia announced this week that it would no longer work to disarm nuclear and chemical weapons under the U.S. program known as Nunn Lugar. This was a very successful program that reduced Russia's stockpiles of weapons of mass destruction over the past 20 years. U.S. money and expertise drove the program, but now the Russians believe they have plenty of both to continue the job on their own. NPR's Mike Shuster reports.

Russia To Go It Alone On Nuke Disarmament 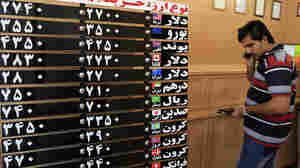 October 2, 2012 • Crowds of anxious Iranians are flocking to foreign exchange offices as the rial continues to plummet; it lost about one-third of its value in just a day. Tough economic and banking sanctions, and an oil embargo, are at the heart of the crisis. Tehran is blaming outsiders, and seems unable to stop the free fall. 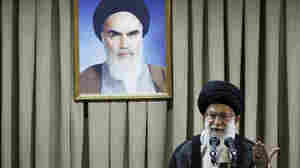 Iranian Supreme Leader Ayatollah Ali Khamenei delivers a speech in Tehran in July. Khamenei says Western-led sanctions will not force Iran to change its policies, but there are signs of other concerned voices in Iran. AP hide caption

September 17, 2012 • Talks on Iran's nuclear activities appear to be at a halt, but there is action behind the scenes. Iran's public position hasn't changed. But privately, debate is growing over whether the nuclear program is worth the economic pain of harsh banking and oil sanctions that continue to do their work.

August 24, 2012 • A new report from the International Atomic Energy Agency says Iran has stepped up its program to enrich uranium. It reports the country is installing more centrifuges in a heavily-defended underground site.

August 23, 2012 • The International Atomic Energy Agency believes Iran has something significant to hide at Parchin. The suspicion is that Iran used the site to test explosions involving uranium metal, which is used in developing a nuclear weapon. Talks with Iran on its controversial nuclear program are set to intensify in the coming days. 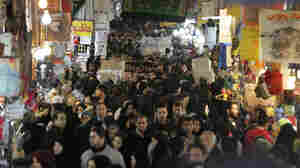 Iranians walk through the main bazaar in Tehran in January. Sanctions by the EU and U.S., plus political woes related to the Syrian uprising, have created the most serious crisis faced by Tehran since the 1980s. Vahid Salemi/AP hide caption

August 16, 2012 • Iran is facing its most serious challenge since the war with Iraq in the 1980s. Abroad, the Syrian uprising is threatening to oust the Assad regime, Iran's sole Arab ally. At home, the EU oil embargo and U.S. banking sanctions are hurting the economy. And domestic criticism is growing. 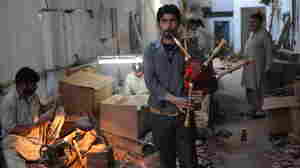 Ibrahim Ahmad, the son of the owner of the Imperial Bagpipe Manufacturing Co., tests a bagpipe at a factory in Sialkot, Pakistan. The Pakistani city is the largest producer of the instruments most commonly associated with Scotland. Farooq Naeem/AFP/Getty Images hide caption

July 26, 2012 • The thought of bagpipes usually conjures up images of Scottish men in skirts — not auto-rickshaws and South Asian spices. But no country manufactures more bagpipes than Pakistan, and no place in Pakistan makes more of them than Sialkot, a bagpipe-crazy city near India-administered Kashmir.

In Pakistan, Sounds Of A Different Kind Of Drone 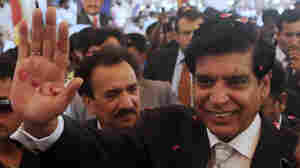 Pakistani Prime Minister Raja Pervez Ashraf is greeted after his election in June. Just weeks later, many Pakistanis expect the nation's Supreme Court may soon attempt to force Ashraf from his position, as it did his predecessor. Rizwan Tabassum/Getty Images hide caption

July 23, 2012 • Pakistan's Supreme Court has given the prime minister until Wednesday to ask Swiss authorities to reopen an old corruption investigation of President Asif Ali Zardari. The premier has refused, and the court is threatening to find him in contempt of court and remove him — as it did his predecessor.

The Cost Of Women's Rights In Northwest Pakistan

July 19, 2012 • Earlier this month, a young woman who ran a women's rights group was shot and killed near Peshawar. She'd been warned several times about her work. Her death isn't the first of its kind in northwest Pakistan. Still, despite the dangers, such work continues.

The Cost Of Women's Rights In Northwest Pakistan 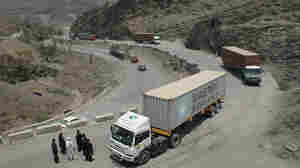 July 11, 2012 • Pakistan reopened border crossings last week for U.S. and NATO convoys heading into Afghanistan, resolving a seven-month-long dispute. But other challenges remain, including disagreement over U.S. drone strikes inside Pakistan and the pro-al-Qaida Haqqani network.

July 4, 2012 • Pakistan has agreed to reopen supply routes to Afghanistan for NATO convoys. The agreement came after Secretary of State Hillary Clinton expressed regret for the deaths of 24 Pakistani soldiers killed in an errant American airstrike last November. 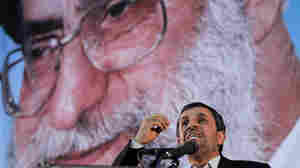 Iranian President Mahmoud Ahmadinejad delivers a speech under a portrait of Iran's supreme leader, Ayatollah Ali Khamenei, on June 2. The supreme leader has said repeatedly that nuclear weapons are un-Islamic and Iran will not pursue them. But in the West, many are skeptical. Atta Kenare/AFP/Getty Images hide caption

June 14, 2012 • Iran's supreme leader has repeatedly cited his own fatwa, or religious edict, that nuclear weapons are a sin and that Iran doesn't want them. Many in the West are skeptical, but U.S. officials are calling on Iran to live up to the fatwa.