November 30, 2018 • President Trump and China's President Xi may have an announcement on trade on Saturday, but it will likely be a decision to push back deadlines rather than a breakthrough agreement.

November 21, 2018 • Oil prices are tanking and there are many factors behind the drop. The price for one barrel of crude has fallen more than 25 percent since early October.

November 14, 2018 • The U.S. has been pressured to respond forcefully to the killing of journalist Jamal Khashoggi in Saudi Arabia's consulate in Istanbul, Turkey. Members Of Congress urge sanctions against Saudi Arabia. 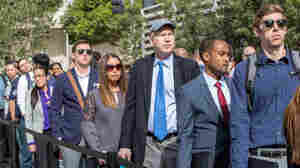 November 1, 2018 • Employers added more jobs than analysts expected, as the jobless rate remained at a nearly 50-year low. Friday's report gives voters a final glimpse of the economy before the midterm elections.

Is It Time For The Fed To Say Goodbye To The Phillips Curve Theory?

October 29, 2018 • The U.S. economy is in a sweet spot, with unemployment at a near 50-year low and an inflation rate that's low and stable. But that combination — low unemployment and low inflation — has economists at the Fed wondering if a theory they've had about how the economy works is still relevant.

Is It Time For The Fed To Say Goodbye To The Phillips Curve Theory?

October 16, 2018 • U.S. executives are pulling out of an investment conference scheduled to take place in Riyadh, Saudi Arabia, next week — as controversy swirls around the disappearance of a missing Saudi journalist. 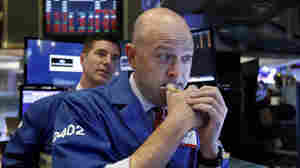 Specialists Jay Woods (right) and Thomas McArdle work on the floor of the New York Stock Exchange on Thursday. The market's recent decline was set off by a sharp drop in bond prices and a corresponding increase in yields last week and early this week. Richard Drew/AP hide caption

October 11, 2018 • U.S. stocks indexes headed lower again after a global sell-off overnight triggered by a plunge in U.S. stocks the day before.

A Look At Why Stocks Plunged On Wall Street

October 10, 2018 • Stocks plunged on Wednesday. The Dow Jones Industrial Average fell more than 800 points, about 3.1 percent. The Nasdaq composite was down more than 4 percent at the close.

A Look At Why Stocks Plunged On Wall Street

October 10, 2018 • Exxon Mobil pledges to support passage of a carbon tax. Analysts say the company would rather face a single, overarching tax than a patchwork of taxes and regulation to address climate change.

October 5, 2018 • A jobs report released by the government on Friday showed unemployment falling to 3.7 percent — the lowest rate in nearly 50 years. 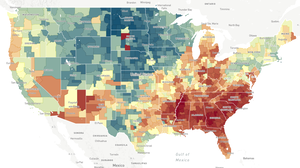 The American Dream Is Harder To Find In Some Neighborhoods

October 1, 2018 • A new data tool finds a strong correlation between where people grew up and their chances of climbing the economic ladder. Charlotte, N.C., hopes to use it to improve residents' economic mobility.

The American Dream Is Harder To Find In Some Neighborhoods

August 28, 2018 • President Trump is touting his trade agreement with Mexico, but big questions remain about how much the new rules will change the trade landscape. 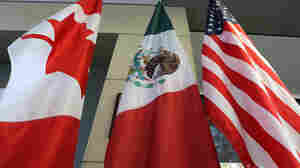 August 27, 2018 • The Trump administration has forged a tentative pact with Mexico on the North American Free Trade Agreement. The next step is to get Canada re-engaged in the talks. 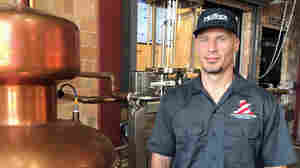 Amir Peay recently opened a distillery in Lexington, Ky., at the site of the James E. Pepper distillery. About 10 percent of his revenues come from exports, and Peay worries that the European Union's tariffs will hurt his overseas business. John Ydstie/NPR hide caption

July 5, 2018 • Whiskey distillers in the U.S. are concerned EU tariffs will take a big bite out of sales. Many have expanded to meet growing demand and worry what will happen if trade frictions aren't resolved soon.