Hillary Clinton Expected To Do Well Over Bernie Sanders In S.C. Primary

February 26, 2016 • Clinton is looking for a big win on Saturday with the support of African-American voters. Sanders, has had a light schedule in the state, and is looking ahead to next week's Super Tuesday contests.

Hillary Clinton Expected To Do Well Over Bernie Sanders In S.C. Primary 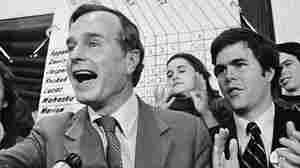 George Bush claims victory in the 1980 Iowa caucuses, with his son Jeb at his side. Jeb Bush would fail in his bid for the White House 36 years later. Jim Mone/AP hide caption

With Bush's Exit, A Chapter In American Politics Closes

February 22, 2016 • Jeb Bush hoped to be the third Bush elected to the White House, and carry on a dynasty that began with George H.W. Bush's first presidential run in 1980.

With Bush's Exit, A Chapter In American Politics Closes

Are Trump And Clinton Victories A Sign Of Things To Come?

February 21, 2016 • NPR's Don Gonyea previews what's next in the presidential primaries after a decisive victory for Donald Trump in South Carolina and Hillary Clinton taking Nevada.

Are Trump And Clinton Victories A Sign Of Things To Come?

February 21, 2016 • Donald Trump won the South Carolina Republican primary while Marco Rubio and Ted Cruz battled it out for second place, and Jeb Bush called it quits after a disappointing showing.

Saturday Is SC Primary For Republicans And Nevada Caucus For Democrats

February 20, 2016 • Saturday is Primary Election Day for Republicans running for president in South Carolina and Democrats in Nevada. NPR gives the latest.

Saturday Is SC Primary For Republicans And Nevada Caucus For Democrats

February 18, 2016 • Marco Rubio had a rollercoaster through the first two presidential contests in Iowa and New Hampshire. He's looking for momentum in South Carolina and landed the endorsement of Gov. Nikki Haley.

February 16, 2016 • Jeb Bush is looking to make a comeback in South Carolina, and Monday night he brought out his brother George W. Bush onto the campaign trail for the first time.

George W. Bush Stumps For His Brother In South Carolina

February 15, 2016 • Former President George W. Bush is campaigning for his brother Jeb Bush for the first time this year at a rally Monday night in North Charleston, S.C.

George W. Bush Stumps For His Brother In South Carolina

February 10, 2016 • Donald Trump showed he could turn his supporters into voters — an important victory for a candidate whose brand is all about winning. Bernie Sander's win was a stunning blow to Hillary Clinton.

February 9, 2016 • Polls are closing at this hour across much of New Hampshire after a day when state officials projected record voter turnout. Candidates are staked out around the state awaiting results.

February 9, 2016 • Governors, current and former, running for president are struggling to break through in the GOP contest. Chris Christie, Jeb Bush and John Kasich are each hoping to exceed expectations.

February 8, 2016 • The governors running for the Republican nomination — Jeb Bush, Chris Christie and John Kasich — are banking on a good performance in New Hampshire to buoy their struggling campaigns. 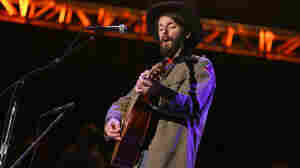 February 5, 2016 • Headphones on, NPR's Don Gonyea is taking you on a roadtrip through the granite state — from Bill Morrissey to Frank Sinatra.