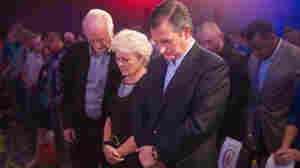 August 25, 2015 • Religious voters are a key for Republicans running for president. One candidate — Texas Sen. Ted Cruz — is making a bold play for them, promising to campaign on defunding Planned Parenthood. 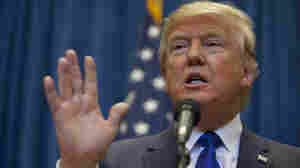 Will GOP's Efforts To Reach Out To Hispanics Survive These Primaries?

Will GOP's Efforts To Reach Out To Hispanics Survive These Primaries? 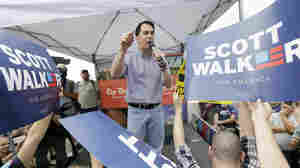 August 18, 2015 • Scott Walker was riding high in Iowa until Donald Trump came along. Walker appeared at the Iowa State Fair Monday, where he tried to rekindle the fire with voters, who think he's gotten boring.

As Popularity Erodes, Walker Hopes To Reignite The Flame At Iowa State Fair

August 17, 2015 • Scott Walker was riding high in the polls in Iowa until Donald Trump came along. Walker appeared at the Iowa State Fair on Monday.

As Popularity Erodes, Walker Hopes To Reignite The Flame At Iowa State Fair

August 17, 2015 • Hillary Clinton has gotten more aggressive in defending herself in the controversy over her private e-mail server. Plus, Donald Trump has begun laying out specific policy proposals. 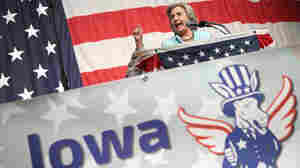 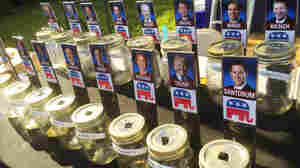 The Federal Election Commission might not approve the methods of WHO-TV's Corn Caucus at the Iowa State Fair. But voting in jars does allow for transparency. Don Gonyea/NPR hide caption

Are There Kernels Of Truth In Latest Iowa Poll? Maybe Not

August 14, 2015 • Visitors to the Iowa State Fair can register their choice for president at the Corn Caucus. 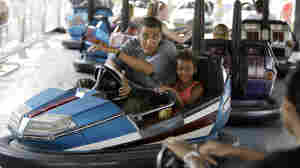 August 13, 2015 • For years the fair, which begins Thursday, has provided a platform for presidential candidates vying in the all-important Iowa caucuses. But they haven't always held on to their pork chops.

Other Candidates Find Ways To Stand Out On Debate Night

August 8, 2015 • Much of the focus in this week's Republican debate was on Donald Trump. But the debate was just important to a handful of underdog candidates, who have been struggling to get noticed.

Other Candidates Find Ways To Stand Out On Debate Night

First Republican Debate Was Wide-Ranging, But All Orbited Around Trump

August 7, 2015 • The other candidates on stage each had their moments, but from an opening test of Trump's party loyalty to a needling closer by ex-Arkansas Gov. Mike Huckabee, eyes were on the poll-leading tycoon.

First Republican Debate Was Wide-Ranging, But All Orbited Around Trump

August 4, 2015 • Fourteen Republican presidential hopefuls made for a crowded GOP field Monday night in Manchester, N.H. Donald Trump declined to attend. It wasn't a debate, but rather two rounds of fast-paced interviews with the candidates over two hours. The event took place as some of the participants scramble to make the final cut for the first official debate set for Thursday in Cleveland. 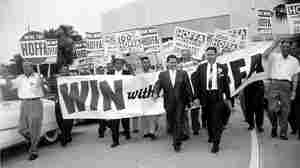 Jimmy Hoffa (walking at left in front) leads a parade of supporting delegates to the Teamsters Union Convention in Miami Beach in 1957. AP hide caption

#TBT: 40 Years After Jimmy Hoffa's Disappearance, His Legend Lives On

July 30, 2015 • Forty years ago today, Hoffa pulled into a restaurant parking lot and was never heard from again. His story is one of union devotion, fraud and fierce political battles.

July 27, 2015 • With just one week to go until the first official Republican presidential debate, candidates are vying for support and attention to secure one of the 10 slots on the debate stage.

Dealing With The Donald: GOP Considers How To Handle The Trump Effect

July 24, 2015 • Donald Trump's rise in the polls is not exactly how the Republican Party establishment hoped the 2016 presidential race would play out. The question is whether they can do anything to contain it.

Dealing With The Donald: GOP Considers How To Handle The Trump Effect