Senior Supervising Arts Desk Editor Ellen Silva has been a public radio producer and editor for more than 25 years. She worked for many years at NPR's national daily call-in talk show, Talk of the Nation, where she held several positions, including senior producer and senior editor jobs. That team earned two duPont-Columbia University Silver Baton awards and a Peabody award for coverage of the 1994 Congress, coverage of the aftermath following the 9/11 terrorist attacks, and the war in Afghanistan.

Previously, Ellen has been senior editor at NPR's evening magazine, All Things Considered, handling commentaries and other duties. Before coming to NPR in 1994, she worked at public radio stations WRTI, WHYY and WAMU, as a jazz deejay, a researcher at Fresh Air and as the senior producer at the Derek McGinty Show, which won the 1994 Corporation for Public Broadcasting Gold Medal award for public affairs programming.

Who Should I Root For: Portugal Or Brazil?

June 25, 2010 • When you have roots in Portugal AND Brazil, how do you choose sides? Maybe praying for a draw is the way to go. 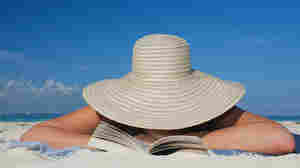 July 29, 2009 • What makes a great beach read? The producer of our book series, Ellen Silva, thinks it's a book set where you're vacationing. She has picked four spots — Venice Beach, Calif.; Cape Cod and Martha's Vineyard in Massachusetts; and South Beach in Florida — with great surf and even better books.

Who Let the Bug Loose?

May 6, 2000 • All around the country this week, fingers have been pointed, accusations launched and denials issued. Did you set off the lovebug? At NPR's offices, we know at least one person who mistakenly launched the virus. NPR's Talk of the Nation Senior Producer Ellen Silva wrote this essay on her new found infamy.

Who Let the Bug Loose?