How To Manipulate People Into Saying 'Yes'

July 24, 2012 • There's new research on how marketers, managers and public radio pledge drives can better use the "foot in the door" technique to make pitches. New research shows people comply with demands when you start by asking for something unusual.

How To Manipulate People Into Saying 'Yes'

July 23, 2012 • The International AIDS Conference is going on this week in Washington, D.C. It's the first time in 22 years the conference is being held in the U.S.

July 23, 2012 • Even as the country grieves over the mass killings in Colorado — a major battleground in the coming election — the public policy and political fallout has become part of the story.

July 20, 2012 • In a speech from Fort Myers, Fla., President Obama said Friday was "a day for prayer and reflection." At least 12 people were killed after a gunman walked into a movie theater in Aurora, Colo., and opened fire.

July 20, 2012 • President Obama cut short a campaign swing through Florida on Friday to talk about the deadly shooting in Aurora, Colo. A masked gunman killed 12 people during a screening of the new Batman movie early Friday.

July 20, 2012 • A suspect is in custody following the mass shooting in a movie theater in Aurora, Colo. At least 12 people are dead. The suspect is said to have no ties to any terrorist groups.

July 19, 2012 • In Bulgaria Wednesday, seven people were killed in a suspected suicide bombing in the seaside resort of Burgos. Five of the victims were Israelis. Israel is calling it a terrorist attack, and says it suspects Iran or Muslim extremists.

July 16, 2012 • Secretary of State Clinton is meeting with Israeli leaders in Jerusalem Monday. U.S. relations with Israel have focused less on the Palestinian situation, and more on the chances of a war against Iran.

July 13, 2012 • The new figures released by the Chinese government matter to the U.S. because of the way the world economy is so interconnected. Americans import a lot from China, but have also been working to boost exports to other nations, including China.

Team USA Predicted To Take The Most Medals

Team USA Predicted To Take The Most Medals 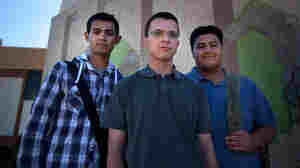 Three students outside the Science College of Benghazi University. They say they expect to have opportunities in Libya that would not have been possible when Moammar Gadhafi was in power. John W. Poole/NPR hide caption

In Libya's Shifting Sands, Kids Try To Find Their Way

July 5, 2012 • Most Libyans are under 25, and for these young people the revolution has created a new set of possibilities and challenges.

In Libya's Shifting Sands, Kids Try To Find Their Way

June 25, 2012 • Beset by economic problems caused by the eurozone financial crisis, Europeans have been turning to one of their favorite sports, soccer, for a distraction. Over the weekend, they were watching the quarterfinals of the Euro 2012 soccer championships.

June 22, 2012 • It's been another tumultuous week in Syria. NPR's Deborah Amos was reporting from inside Syria earlier this week but she's back in Lebanon now. She says what surprised her most while she was in Damascus, is that more people are speaking out against President Assad's government.

June 22, 2012 • Fifteen major banks were downgraded Thursday in a reflection of the slowing global economy and volatility in financial markets. In a sweeping move, Moody's cut the credit ratings of some of the world's largest financial institutions, including Bank of America, Goldman Sachs and Citigroup.