January 27, 2014 • Ezra Klein and the team behind the Wonkblog at The Washington Post have found a new home. They are joining Vox Media, a digital outfit with sites serving sports fans, foodies and gamers — but little in the way of news about politics. The creation of the new site, tentatively called Project X, demonstrates the pull of digital media for entrepreneurial journalists.

In Grantland Backlash, Both Ire And Probing Questions

January 21, 2014 • Controversy has dogged an article published last week on the website Grantland. The piece is called "Dr. V's Magical Putter," and it tells the unusual tale of Essay Anne Vanderbilt, who designed a golf putter that attracted positive attention. In the course of reporting the article, writer Caleb Hannon discovered that several purported facts about Vanderbilt's life had been falsified. Hannon also learned that Vanderbilt had been born a man and was living life as a woman. Critics of Hannon's article have alleged, among other things, that his reporting contributed to Vanderbilt's suicide in October 2013.

In Grantland Backlash, Both Ire And Probing Questions

January 20, 2014 • Roger Ailes is a hero to the political right and a boogeyman to the left for leading the Fox News Channel to become the top-rated force in cable news --- the competition is not even close. Ailes and Fox refused to cooperate with author Gabriel Sherman. 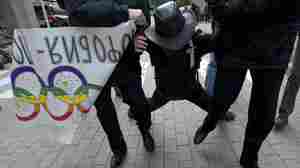 Russian police officers detain a gay-rights activist during a protest outside the Winter Olympics organizing committee office in Moscow. Clashes over gay rights put NBC in a difficult position: Olympic officials insist that the games should not be politicized, while activists push the network to report on the issue as a journalistic enterprise. Ivan Sekretarev/AP hide caption

How Will NBC Cover Gay Issues During Sochi Olympics?

January 13, 2014 • Mainstream Russian media outlets don't cover gay issues neutrally — let alone positively. So, as the nation gears up to host the Winter Olympics, activists are calling on Western media to shed light on the plight of gay Russians. That puts NBC in the awkward position, as both a journalistic enterprise and a business partner of the Olympic Games.

How Will NBC Cover Gay Issues During Sochi Olympics? 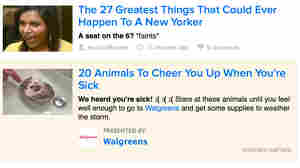 Buzzfeed is among a growing number of outlets using native advertising online. The ads mimic the site's look and style, and some link to pages almost indiscernible from a typical Buzzfeed page. screengrab/Buzzfeed.com hide caption

January 8, 2014 • The New York Times' new Web redesign includes "native advertising": articles written by people working for the paper's advertisers. BuzzFeed and other outlets have already embraced the ads, but critics say the lines between paid and original content are sometimes just too blurry.

January 3, 2014 • Ezra Klein, founder of The Washington Post's Wonkblog policy website, is planning to leave the Post, according to a report in Friday's The New York Times. The Times says the Post's new owner, Amazon founder Jeff Bezos, and the Post's publisher turned down Klein's request for a dollar amount in "eight figures" to launch a new explanatory journalism venture. It's a boom time for so-called "content verticals" among news operations, with new projects being launched by the Times, The Wall Street Journal and ESPN, among others.

December 18, 2013 • CBS is once again facing criticism over a story aired on 60 Minutes — this one about the National Security Agency. This new controversy over the show's journalism comes on the heels of a false story the show aired on the attacks against the U.S. diplomatic installation in Benghazi, Libya.

December 12, 2013 • Reporters gave White House Press Secretary Jay Carney a tough time Thursday over the way in which the administration controls President Obama's image. In this case literally, by severely limiting the situations in which professional photojournalists get to take pictures of the president. News organizations have formally protested.

China Threatens To Expel Reporters After Reports On Leaders' Wealth

December 5, 2013 • Chinese authorities have threatened to toss out all of the reporters for The New York Times and Bloomberg in China after 18 months of blockbuster stories exposing corruption among the elites — including, in the Times case, the family of Premier Wen Jiabao, who ruled for a decade, and Bloomberg's reporting on Li Keqiang, who took over in March. It is a reaction that has not been seen since the earliest days after the thawing of relations between the U.S. and China in the mid-1970s.

China Threatens To Expel Reporters After Reports On Leaders' Wealth

BuzzFeed's content is created by both paid staff members and users of the site. Matt Haughey/Flickr hide caption

December 4, 2013 • BuzzFeed's digital traffic is stratospheric, driven largely by animated GIFs and lists, like the 10 most life-affirming dog rescue stories. But the social media outfit is in the process of building up a team of journalists to offer original news reporting, raising questions of just what it intends to be.

November 26, 2013 • NPR has obtained the findings of a CBS internal investigation of an inaccurate 60 Minutes report by Lara Logan. CBS was forced to admit that one of the story's central figures fabricated an eyewitness account.

November 8, 2013 • On Friday, CBS News retracted a key element of an investigative report about the deadly attack on the U.S. mission in Benghazi, saying the network had been misled. CBS had defended its story for days despite growing doubts about the credibility of the British security contractor it presented as an eyewitness to the attack. 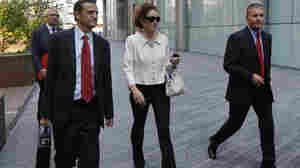 October 27, 2013 • British news executives go to trial Monday following the phone hacking and bribery scandal that sank Rupert Murdoch's News of the World. The trial is expected to reveal details of the uncomfortably cozy relationship between the media and political elites.

AP Firings Leave Many In News Media Scratching Their Heads

October 23, 2013 • A brief Associated Press story that wrongly claimed Virginia Democratic gubernatorial candidate Terry McAuliffe had been accused in court documents of lying to a federal investigator has resulted in the firings of several AP journalists.

AP Firings Leave Many In News Media Scratching Their Heads

October 21, 2013 • Glenn Greenwald's series of national security scoops throughout the summer for the NSA convinced him he wanted to do more reporting, and needed a place beyond the reach of the British authorities to do it. He has found a partner in Pierre Omidyar, the billionaire co-founder of eBay who has taken an interest in investigative journalism.