Egypt To Start Dialogue With All 'Political Forces'

January 31, 2011 • It may be the beginning of the end for the Mubarak regime. Egypt's newly appointed Vice President Omar Suleiman spoke on state television Monday saying President Hosni Mubarak had asked him to immediately begin dialogue with "political forces" for constitutional and legislative reforms. Meanwhile, demonstrators are preparing for a million-person march Tuesday.

Egypt To Start Dialogue With All 'Political Forces'

January 31, 2011 • Egypt's most prominent democracy advocate is calling for President Hosni Mubarak to resign. Nobel Peace laureate Mohamed ElBaradei used a bullhorn to speak to thousands of protesters in Cairo Sunday. Meanwhile, new blast walls and barricades are being erected in the Square.

January 30, 2011 • Ignoring a government curfew, thousands of protesters remained in the streets and squares of Cairo through the night. The army has been deployed, but is allowing peaceful demonstrations to proceed. Many soldiers and officers have expressed solidarity with the protesters. The police who clashed with protesters in the early days have disappeared, though there are reports that some of them may be provoking fear and chaos, disguised as thieves.

January 28, 2011 • Earlier this week, TV station Al-Jazeera published more than 1,600 secret documents that detail 11 years of Arab-Israeli peace talks. What do the released papers reveal about U.S.-Palestinian relations under the Obama administration?

January 24, 2011 • The release of secret documents about Middle East peace talks has put the Palestinian leadership in an awkward situation. The Arabic language news channel Al-Jazeera has obtained some 1,600 documents, mostly about negotiations between Israel and the Palestinians. The documents show that the Palestinians offered unprecedented concessions but were rebuffed by Israeli leaders.

January 24, 2011 • During Middle East peace talks in 2008, Palestinians reportedly were prepared to compromise with Israel over two of the toughest issues: Jerusalem and refugees. The Al-Jazeera TV channel is citing documents it said came from the talks. Palestinian negotiators denied the report, saying parts of the documents were fabricated.

January 20, 2011 • Settlement construction of Jewish housing in the occupied West Bank and East Jerusalem is booming. The construction has a direct impact on Palestinians — especially in Walajah. The village falls half in and half out of the boundaries of Jerusalem, and it is nearly surrounded by settlements. 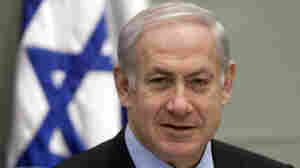 Israeli Prime Minister Benjamin Netanyahu attends a meeting with the Foreign Affairs and Defense Committee at the Israeli Parliament, or Knesset, in Jerusalem on Jan. 3. The prime minister is caught in the crossfire of a heated political debate over recent government moves that some on the left have labeled "a wave of evil." Menahem Kahana/AFP/Getty Images hide caption

Netanyahu Under Fire From Israeli Left And Right

January 19, 2011 • A heated debate is under way in Israel over issues of racism, freedom of expression and dissent. Analysts warn of a serious conflict brewing between Israelis on the left and the right, and Prime Minister Benjamin Netanyahu is facing criticism from all sides because of it.

Netanyahu Under Fire From Israeli Left And Right 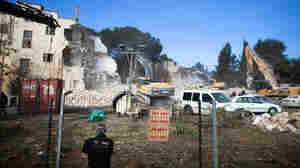 January 10, 2011 • The United States, European countries and the Palestinians have all denounced the destruction of the Shepherd Hotel, which has long been a source of contention, to make way for Jewish housing.

January 10, 2011 • Israel has announced a major natural gas find. Last month's discovery is the largest deep-water gas field found anywhere in the past 10 years. It could turn the tiny energy consuming nation into an energy exporter. 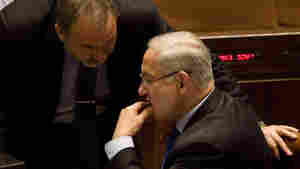 January 7, 2011 • As foreign minister, Avigdor Lieberman is supposed to represent government policy, but instead he has directly contradicted it. Lieberman is seen as using his position to push forward his party's agenda -- often putting him in conflict with the prime minister. 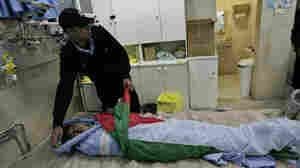 Activists Accuse Israel Of Cracking Down On Dissent

January 4, 2011 • Three recent cases have put the spotlight on how Israel deals with a growing protest movement. A Jewish Israeli was sentenced to three months in prison for participating in a peaceful bicycle demonstration. An arcane law is being used to remove a Palestinian activist from his Jerusalem home. And this weekend, a Palestinian died after inhaling tear gas dispersed by Israeli forces at a demonstration.

Activists Accuse Israel Of Cracking Down On Dissent

Palestinians In Global Push For Statehood

December 31, 2010 • The U.S. is continuing diplomatic efforts to revive Israeli-Palestinian peace talks but the prospects do not look good. The Palestinians are now bringing their fight for independence into the global arena.

Palestinians In Global Push For Statehood

December 30, 2010 • Former Israeli President Moshe Katsav was found guilty of rape and other sexual offenses Thursday. The case is the most serious ever brought against a high-ranking Israeli official. Katsav has denied the charges.

December 24, 2010 • It's been two years since the Gaza War was launched -- and tensions are high on both sides of the border since a spate of tit-for-tat violence over the past few weeks. The head of Israel's military has warned the Israeli parliament that the border between Gaza and Israel is a tinderbox. Hamas says it's not responsible for the uptick in rocket attacks, but Israel says it's accountable for violence directed at Israel.