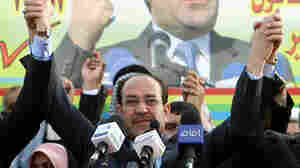 February 23, 2010 • After last year's provincial elections, Iraqi Prime Minister Nouri al-Maliki was the big winner, and his State of Law coalition looked unbeatable. But in the Shiite heartland of southern Iraq, support for Maliki is waning as the March 7 vote approaches.

February 16, 2010 • While once a close ally of the U.S., Iraqi politician Ahmed Chalabi is viewed with wariness and apprehension by Americans. Chalabi seems to be Iraq's ultimate political survivor, making headlines again with his involvement in the recent purge of candidates linked to Saddam Hussein's Baath party ahead of the elections. Chalabi heads the Justice and Accountability Commission. 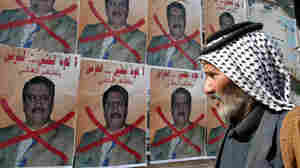 An Iraqi man walks past posters with a symbolic X across a picture of Iraqi lawmaker Dhafir al-Ani, a Sunni politician who was barred from running in the election because of alleged ties to the Baath party. Alaa al-Marjani/AP hide caption

February 12, 2010 • Iraq's Prime Minister Nouri al-Maliki publicly took U.S. Ambassador Christopher Hill to task for what he called overstepping his diplomatic role. The most recent disagreement centered on Malaki's support for the decision to ban more than 500 candidates in next month's parliamentary elections for alleged ties to Saddam Hussien's Baath party. The U.S. had been trying to get the banned candidates reinstated. 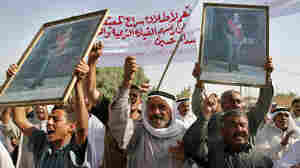 Iraqis holding pictures of Saddam Hussein march during a protest against the new constitution of Iraq near Ramadi in 2005. Bilal Hussein/AP hide caption

February 10, 2010 • Ahead of national elections in March, residents of Anbar province say they're disillusioned with the current government and look back on the late Saddam Hussein with nostalgia. For all of his shortcomings, they say Saddam was a leader who inspired fear and respect.

February 5, 2010 • Close to 100 Shiite pilgrims have been killed and dozens wounded this week by a spate of bombings in Baghdad and the holy Iraqi city of Kerbala. The violence comes as millions of pilgrims flock to the city to mark the 40th day after the martyrdom of Imam Hussein, one of the most revered figures in Shiite Islam. The pilgrims culminated their journey Friday with gatherings in both cities. 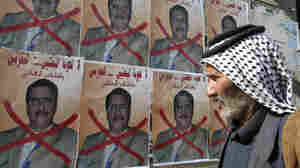 In this Jan. 20 photo, an Iraqi man in Najaf, south of Baghdad, walks past posters for Iraqi lawmaker Dhafir al-Ani, a Sunni politician who had been barred from running in the March 7 parliamentary election because of alleged ties to the Baath Party. The Arabic says, "No return for the Baathists." An Iraqi appeals court Wednesday suspended the ban on hundreds of candidates for suspected ties to Saddam Hussein's regime, allowing them to run in the election. Alaa al-Marjani/AP hide caption

February 3, 2010 • An Iraqi appeals court overturned a move to disqualify some 500 candidates in next month's parliamentary elections because of their alleged ties to Saddam Hussein's Baath Party. The controversy over the Baathists raises questions about who else is being allowed to run for office.

January 30, 2010 • The Palestinian minister of economy tells NPR that in the next few months it will become illegal for Palestinians to work in Israel's West Bank settlements. Palestinians who flout the new rule will be jailed and or fined. It's the next phase of plan currently underway to boycott settlement products. But thousands of Palestinians earn their livelihood in settlements, many of them in construction. 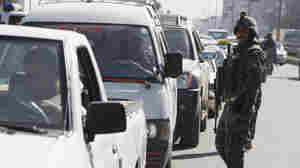 January 29, 2010 • A wave of bombings this week killed more than 60 in Iraq's capital and left residents jittery, fearing that attacks will increase as the March elections approach. Iraqis are dubious that Baghdad's hundreds of checkpoints and unreliable bomb-detecting devices can protect them.

January 27, 2010 • Dozens of people died in Baghdad bombings this week. To many Americans, the death toll is another grim statistic in a distant and fading war, but this week's dead include a close friend and Iraqi colleague of the author. 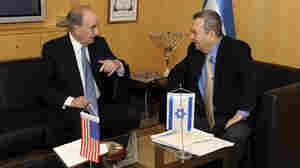 January 21, 2010 • U.S. envoy George Mitchell is back in the Middle East, trying to revive peace talks between the Israelis and Palestinians. A series of demands from both sides have prevented a resumption of peace talks, and neither side is optimistic about the outcome.

Jordan Caught Between An Ally And Its People

January 12, 2010 • The recent attack by a Jordanian suicide bomber on a CIA base in Afghanistan revealed the depth of the cooperation between the two allies. But even though the Jordanian government is pro-Western, anti-American sentiment runs high in the desert kingdom.

Jordan Caught Between An Ally And Its People

January 11, 2010 • Over the weekend, a video showing the Jordanian bomber who killed seven CIA employees in Afghanistan was broadcast on Arab and Pakistani television. He appeared dressed in camouflage and vowed to avenge the death of a Taliban leader killed by an unmanned drone. He lived in Amman, and a friend says he was kind and would be the last person you'd think would do something like this.