April 29, 2011 • Egypt has come under harsh criticism for the way it's dealing with migrant workers who fled the fighting in eastern and western Libya. There are 600 asylum seekers and thousands more third-country nationals who are living at the border.

April 15, 2011 • There were more NATO air strikes on targets in the Libyan capital Tripoli Thursday. Libyan officials immediately reported damage to civilian installations. But an official tour of the bombing sites for journalists did not go as the government planned.

Gadhafi Spokesman Belts Out His Version Of 'Zenga Zenga'

April 14, 2011 • It's been another bizarre day in Tripoli for journalists trying to cover the news there. They return to their hotel to find Moussa Ibrahim — who's usually giving them the regime's version of events — singing with his friends.

April 14, 2011 • In Libya, money is running out on both sides of the fight. The country's assets have been frozen, and the rebel government wants the money to carry on its war against Moammar Gadhafi. But Gadhafi's finance minister says the international community has no right to give away the funds. 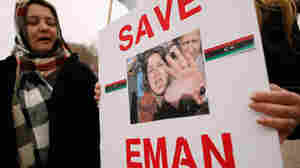 April 12, 2011 • Two weeks ago, Iman al-Obeidi burst into a Tripoli hotel and told journalists that she had been gang-raped by members of forces loyal to Libyan leader Moammar Gadhafi. Now, Obeidi tells her story to NPR's Lourdes Garcia-Navarro and another reporter, the first journalists to independently speak with her in person.

April 11, 2011 • Leaders of the African Union are in Eastern Libya to negotiate with the rebel leadership. They've just met with Moammar Gadhafi, and they say he has agreed to their "road map' to end the fighting with rebels.

No Victory In Misurata Despite Gadhafi's Claims

April 9, 2011 • Gadhafi's government has said the situation in Misurata is under control, but when the journalists arrived there, they immediately found themselves in the middle of a firefight. NPR's Lourdes Garcia Navarro was among the small group of reporters taken by the Libyan government Friday to the besieged city of Misurata.

No Victory In Misurata Despite Gadhafi's Claims 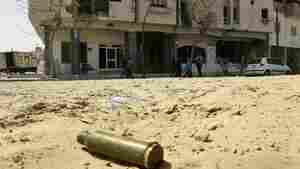 Libyans walk along a street close to Martyr's Square in the city of Zawiya, west of the capital, Tripoli, on Tuesday. During the first few weeks of the uprising, Zawiya was one of the most contested cities. Now, the rebellion here has been crushed. Joseph Eid/AFP/Getty Images hide caption

April 6, 2011 • During the first weeks of the uprising, Zawiya was one of the most contested cities. Now, the rebellion here has been crushed, and green pro-Gadhafi banners are everywhere. But beneath the surface calm, resentment seethes, a sign of what is happening in the rest of this country. 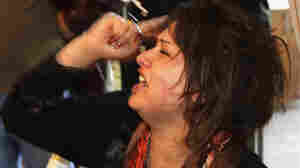 Iman al-Obeidi, who said she spent two days in detention after being arrested at a checkpoint in Tripoli, Libya, and was sexually assaulted by up to 15 men while in custody, shouted as she told her story at the Rixos hotel in Tripoli on Saturday (March 26, 2011). Jerome Delay/AP hide caption

Iman Al-Obeidi: 'Every Day I Am Beaten'

April 4, 2011 • The Libyan woman's dramatic appearance at a Tripoli hotel filled with journalists ended with her being dragged away by authorities. Now she isn't in prison, but says she is beaten by police when she leaves her home.

Iman Al-Obeidi: 'Every Day I Am Beaten' 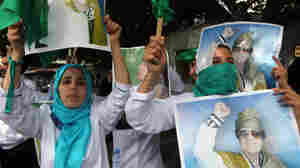 April 4, 2011 • Rebels continue to battle government forces around the Mediterranean oil port of Brega. Much of the eastern part of Libya is under rebel control, but in most of the west, Moammar Gadhafi has the upper hand. The most sizable exception is the city of Misurata — and it's a battle zone. 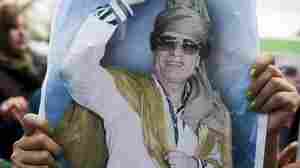 March 31, 2011 • With the Libyan rebels repeatedly getting driven back, it has become apparent to many analysts that airstrikes alone can't help them take on Gadhafi's forces effectively. Some observers are now saying the conflict could drag on for years.

March 30, 2011 • Foreign journalists covering events in the Libyan capital, Tripoli, are facing increased government pressure. The regime's tactics are a kind of relentless psychological warfare that can seem absurdly funny at times. But journalists are worried that the incitement could lead to violence.

March 29, 2011 • Dozens of governments and international organizations are in London to discuss the future of Libya, and ways to get Moammar Gadhafi to step down. President Obama addressed the nation Monday to explain the U.S. mission to protect the Libyan people from immediate danger. Libyans are closely following the developments.

As Rebels Advance On Tripoli, Residents Stock Up

March 28, 2011 • Rebels in eastern Libya are moving west toward the capital Tripoli. Shops there are closed, and residents are forced to stock up on food and gas when they can find it. The bombings by coalition airplanes also started up again in the capital.

As Rebels Advance On Tripoli, Residents Stock Up