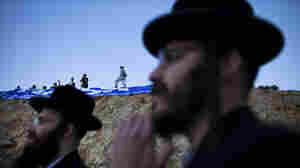 Israelis who support Jewish settlements in the West Bank rally against a demolition order for the outpost of Ulpana on Sunday. Israeli courts have ordered the outpost torn down, but Prime Minister Benjamin Netanyahu's government is looking to keep it intact. Uriel Sinai/Getty Images hide caption

April 23, 2012 • Israel's highest court has ruled that Ulpana, a Jewish settlement outpost in the West Bank, was built on Palestinian land and should be torn down. But Prime Minister Benjamin Netanyahu's government is now looking for a way to keep it in place. The issue could threaten the survival of Netanyahu's government.

April 21, 2012 • Last weekend's meeting on Iran's controversial nuclear program didn't produce any breakthroughs, but the envoys from six world powers and Iran suggested that the talks in Istanbul began a process that could lead to an eventual compromise. NPR's Lourdes Garcia-Navarro reports that Israel was not happy with the results from Istanbul. 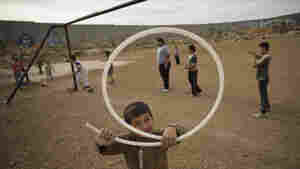 Palestinian children play next to Israel's separation barrier in the West Bank town of Abu Dis in 2011. As peace talks between Israel and Palestine remain at a standstill, people are looking to other possible solutions. Bernat Armangue/AP hide caption

April 12, 2012 • As hopes for an agreement between Israel and the Palestinians diminish, a "one-state solution" is among the ideas being discussed. In its broadest definition, it would mean absorbing the West Bank and perhaps even the Gaza Strip and all of its Palestinian population into a greater Israel. But it's an idea many Israelis view with dismay. 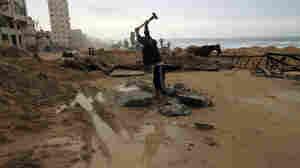 A Palestinian youth breaks up stones for construction in Gaza City. Despite restrictions on imports including building material, the area is going through a construction boom. Mohammed Abed/AFP/Getty Images hide caption

March 17, 2012 • The Palestinian territory is in the midst of a construction boom, more than three years after a major Israeli assault that left much of the territory in ruins. Since building materials haven't been allowed in legally since 2007, items like cement have been smuggled in through tunnels from Egypt. 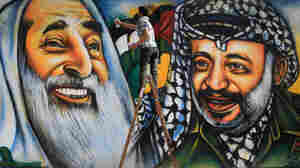 March 14, 2012 • The Islamist group, which controls the Gaza Strip, is undergoing "fundamental change," according to analysts and the statements of its senior leaders. Hamas leaders say there are divisions among the ranks as they try to grapple with where to push the movement. 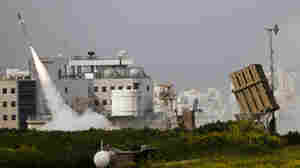 The Israeli military says its Iron Dome system has been extremely effective against Palestinian rockets coming out of the Gaza Strip. Here, an Israeli missile is launched Monday near the city of Ashdod in response to a Palestinian rocket. Uriel Sinai/Getty Images hide caption

March 12, 2012 • The Israelis and Palestinians are once again trading fire across the borders of the Gaza Strip. But Israel says there's something different this time: The Iron Dome defense system is blocking some 90 percent of the Palestinian rockets.

No Let Up In Gaza-Israel Violence

March 12, 2012 • Days of fighting on the border between Israel and the Gaza strip cotinues. Israeli airstrikes killed three more people Monday in Gaza, the Palestinian-held area. Israelis have been bombing, Palestinians have been firing rockets into Israel.

No Let Up In Gaza-Israel Violence 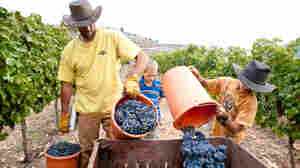 Evangelical Christians from the U.S. are living and working at Jewish settlements in the West Bank for weeks at a time. The Christians see Jewish expansion in the area as fulfilling biblical prophecy, though the settlements are a contentious issue between Israelis and Palestinians. Here volunteers harvest grapes. Courtesy of Heather Meyers hide caption

March 7, 2012 • Many evangelical Christians believe it is their duty to help Jews expand the Jewish state. They have provided money to help the settlements grow, and now they are coming to labor in the vineyards, which they see as fulfilling biblical scripture.

Some Palestinians Critical Of U.S.-Israel Talks

March 5, 2012 • Palestinian leaders are voicing disappointment with the Obama Administration's apparent reluctance to do more to promote the stalled Mideast peace process. They say the issue is no longer a priority for the U.S.

Some Palestinians Critical Of U.S.-Israel Talks

February 28, 2012 • The heightened tensions between Israel and Iran over its nuclear weapons program have some residents in the Jewish state nervous. Israel's leaders have been talking about a possible conflict. 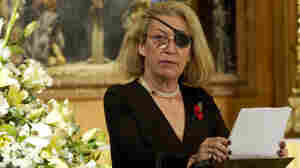 Marie Colvin of The Sunday Times, at a service for fallen journalists in 2010. Arthur Edwards/WPA pool/Getty Images hide caption

February 22, 2012 • One of two journalists killed today, she spent her life reporting from war zones across the world to illuminate the tragedies and perils that ordinary people caught in extraordinary events face. 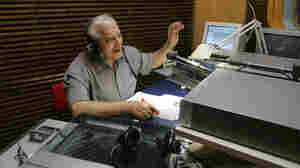 Jews With Ties To Iran And Israel Feel Conflicted

February 7, 2012 • Some 250,000 people of Persian descent are living in Israel, and many maintain strong ties with Iran. As tensions between the two countries escalate, the community is uniquely troubled by the possibility of war.

Jews With Ties To Iran And Israel Feel Conflicted 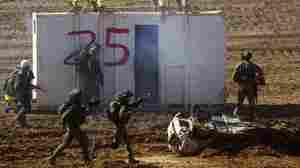 Israeli soldiers take part in an exercise at the Shizafon army base, in the Negev Desert north of the southern city of Eilat, on Tuesday. There are growing signs that Israel may be planning a strike against Iran's nuclear facilities. Jack Guez/AFP/Getty Images hide caption

January 31, 2012 • Speculation is mounting over whether Israel will attack Iran's nuclear facilities sometime soon. Israelis see Iran as a threat, but many wonder whether it would be worth the price.

January 28, 2012 • An illegal Jewish outpost in the occupied West Bank is at the center of a swirling battle over settlements. The collection of trailers and makeshift buildings is called Migron, and the Israeli Supreme Court has said that it must be dismantled by the end of March. NPR's Lourdes Garcia-Navarro reports. 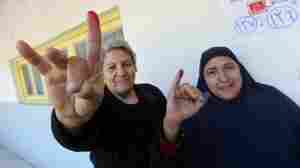 Egyptian women show their ink-stained fingers after voting at a polling station earlier this month. According to the election results, less than 2 percent of parliamentarians will be female. Khaled Desouki/AFP/Getty Images hide caption

January 21, 2012 • The final election results were read out Saturday with little ceremony, but the final tally cemented what most people in Egypt already know: Islamist groups are the new political powerhouse in post-revolutionary Egypt.