June 29, 2015 • President Dilma Rousseff will visit the White House on Tuesday for talks with President Obama. The National Security Agency spying scandal prompted her to cancel a state visit two years ago.

June 15, 2015 • Brazil is one of the top cybercrime countries in the world. Up until recently it was mostly its own citizens who were targeted, but now their imaginative schemes are involving Americans too.

June 15, 2015 • Brazil was an early adapter of online banking, but it's been slow to develop defenses against cybercrime. Online thieves have found boundless opportunities and now operate far beyond Brazil's borders. 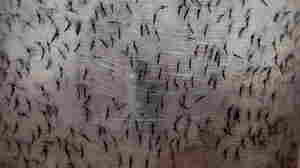 Brazilians Take A Swing At Mosquitoes With The Zap Racket

June 14, 2015 • The electrified tennis racket that kills mosquitoes is ubiquitous in Brazil. It's deeply deeply satisfying to use. But it does take technique.

Brazilians Take A Swing At Mosquitoes With The Zap Racket 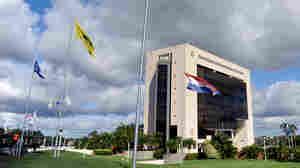 The headquarters of the South American Football Confederation, or CONMEBOL, in Luque, Paraguay. The confederation has the status of an embassy, which includes legal immunity in Paraguay. Two former heads of CONMEBOL have been indicted in the FIFA scandal, accused of taking bribes and money laundering. Norberto Duarte/AFP/Getty Images hide caption

June 5, 2015 • The South American soccer federation, which is part of FIFA, has diplomatic status on par with an embassy. That means that inside its luxurious grounds, Paraguayan law does not apply.

Indictment Against FIFA Raises Questions About Nike's History In Brazil

May 29, 2015 • A U.S. indictment alleges an unnamed sportswear company paid bribes to secure a 1996 deal with Brazil. That's the year Nike signed a multi-million dollar sponsorship with Brazil's soccer federation.

Indictment Against FIFA Raises Questions About Nike's History In Brazil

May 27, 2015 • Several of those indicted on corruption charges were from Latin America or the Caribbean. Most people from Brazil, the country that just hosted the World Cup, see the soccer leadership as corrupt. 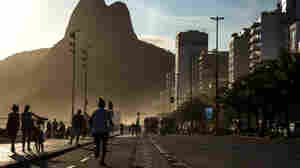 May 22, 2015 • Brazil is touted as one of the most racially harmonious places in the world, but people of color who move there say they are surprised at the degree of discrimination they face based on skin color. 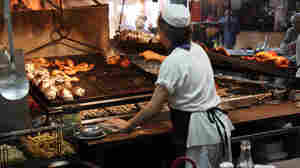 Steaks on the grill at the Mercado del Puerto in Montevideo. So far there are no figures that show if the table salt ban, which was enacted a few years ago, is actually making a difference in Uruguayans' health. Travel Aficionado/Flickr hide caption

May 17, 2015 • The tiny nation has some of Latin America's highest rates of obesity, hypertension and heart disease. The capital Montevideo has tried to intervene by making salt on the table illegal. 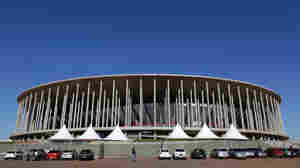 Brazil spent billions renovating and building World Cup stadiums. Almost a year after the tournament ended, the nation is still trying to figure out what to do with them. The Mane Garrincha Stadium in Brasilia, Brazil (shown here in April 2014), was the most expensive of the stadiums — at a cost of $550 million — and is now being used as a bus parking lot. Eraldo Peres/AP hide caption

May 11, 2015 • Another lavish $215 million arena built for last year's event is now a homeless shelter. Touted as one of the best World Cups in history on the pitch, it's left a hangover of waste and mismanagement. 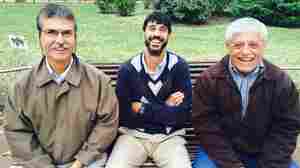 Daniel Gomez (from left), Lister Sena and Ricardo Alvarez were laid off after working for years with Philip Morris in Uruguay. They are now inspectors enforcing the country's tough anti-smoking laws. Lourdes Garcia-Navarro/NPR hide caption

Once Philip Morris Workers, Now They Clamp Down On Uruguay's Smokers

May 8, 2015 • The men worked at the tobacco company for years. But after they were laid off, the only jobs they could find were as anti-smoking inspectors for the government. They do their new job with gusto.

Once Philip Morris Workers, Now They Clamp Down On Uruguay's Smokers 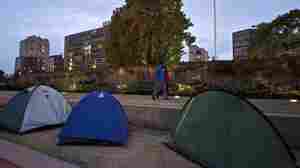 Former Guantanamo prison inmates walk between their tents and the U.S. Embassy in Montevideo, Uruguay's capital, where four former prisoners are protesting what they say is an inadequate deal in exchange for permanent asylum. Pablo Porciuncula/AFP/Getty Images hide caption

April 30, 2015 • The men, resettled there after years in detention, say they aren't getting enough assistance. Camped outside the U.S. Embassy, they are seeking housing and other help reintegrating into society. 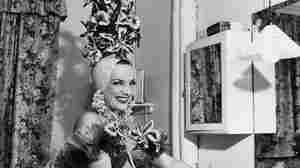 During her lifetime, singer and dancer Carmen Miranda (shown here in a dressing room at the London Palladium in 1948) was a huge success in the United States, but rejected at home in Brazil as a sellout. George Konig/Keystone Features/Getty Images hide caption

April 22, 2015 • The Brazilian performer was a huge hit with American audiences who loved her outrageous costumes and beautiful voice. But she's been less appreciated in her homeland — until now.

April 21, 2015 • More than 50 tons of dead fish have been removed from a Rio de Janeiro lagoon slated to host Olympic events. Specialists blame algae blooms but water quality has been a concern for Olympic organizers.

April 13, 2015 • Anti-government protests in Brazil are entering their second month. Some of the new faces of the latest protest movement include a 19-year-old Libertarian who wants to take the president down.