July 31, 2011 • There are clashes going on in the eastern rebel city of Benghazi, yet on the streets of the city, people are preparing for the holy month of Ramadan. NPR's Lourdes Garcia-Navarro reports from Libya on the eve of the fast. 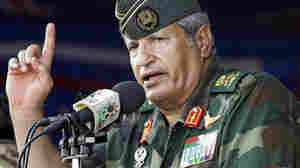 In this photo taken July 6, rebel forces chief commander Abdel Fattah Younes speaks during a rally in the rebel-held city of Benghazi, Libya. Libya's rebel leadership council announced the death of Younes on Thursday, hours after he was arrested by the rebels for questioning about suspicions his family still had ties to Moammar Gadhafi's regime. Sergey Ponomarev/AP hide caption

July 29, 2011 • A senior military commander of Libya's rebel forces, Abdel-Fattah Younis, was killed Thursday after being summoned for questioning by rebel authorities. Uncertainty surrounds the circumstances of his death.

July 28, 2011 • In Libya, there's a stalemate on the battlefield and a deadlock in negotiations aimed at ending Moammar Gadhafi's four decades in power. 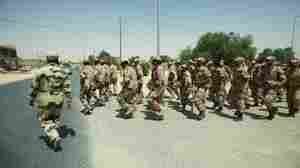 Specially selected rebel fighters march through the streets of Zintan, Libya. These rebels will be trained in urban combat in anticipation of an expected move toward Tripoli. Jonathan Levinson for NPR hide caption

July 20, 2011 • Rebel commanders in the western mountains of Libya say they are supplying dissident forces in Tripoli with weapons in advance of a march on the capital. It's not clear how feasible their plan is, but interviews with residents who have fled suggest that Gadhafi's hold on Tripoli may be weakening. 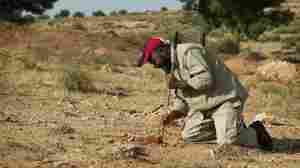 July 19, 2011 • On the eastern battlefront in Brega, mines have impeded a speedy rebel advance. In the west, an increasing number are being uncovered every day. Defusing the mines is perilous work and increasingly means digging them up by hand.

July 14, 2011 • There's been more fighting in western Libya as forces loyal to Moammar Gadhafi moved to retake control of a village that fell to rebel fighters earlier this week. As news of the latest attack spread, young rebels in the mountain town of Zintan jumped into cars and trucks heading to the front. Civilians fled in the other direction to escape the bombardment. 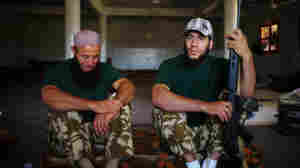 Mabruk Eshnuk (left) and his son Malik left their home in Pittsburgh to volunteer and fight with rebels in western Libya's Nafusa Mountains. Ayman Oghanna for NPR hide caption

July 12, 2011 • Rebel commanders say one of their objectives is the city of Zawiya, the site of a major oil refinery. But for some fighters, the battle is about much more than a refinery. The rebel force includes many who were chased out of the city by Gadhafi's forces, as well as a father and son who traveled from Pennsylvania. 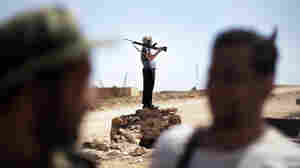 Libyan rebels gather at the front line on the eastern ridge of the Nafusah Mountains in Western Libya on Sunday. Marco Longari/AFP/Getty Images hide caption

July 12, 2011 • Over the past few weeks in Libya, the rebels have made substantial gains against forces loyal to Moammar Gadhafi. But the isolated region southwest of Tripoli is now facing major shortages of food and other supplies.

July 10, 2011 • Fierce fighting in the western mountains of Libya has turned at least half a dozen villages into ghost towns. Some have been emptied by Moammar Gadhafi's forces, others have faced rebel retribution for being perceived as loyalists. NPR's Lourdes Garcia-Navarro reports.

July 8, 2011 • Exactly who is fighting for Moammar Gadhafi has been a question since the rebellion in Libya began. Rebels say they're facing off against well-trained and well-paid guns for hire, flown in from other African countries. But interviews with captured soldiers in Zintan paint a more complicated picture. 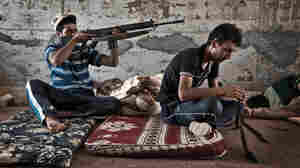 Libyan clean their weapons under a bridge near Bir Ayyad, a town approximately 25 miles from Zintan in the western mountains of Libya, on June 26. Colin Summers/AFP/Getty Images hide caption

July 6, 2011 • While the front lines in the eastern part of the country have been static for months now, rebels in the west are making headway. The rebel offensive in Libya's western mountains has emerged as a threat to Gadhafi's hold on the capital, Tripoli, and other strategic cities.

Morocco Votes To Curb The King

July 2, 2011 • Moroccans have voted in favor of a series of constitutional reforms that will limit the powers held by their king. Host Scott Simon gets the details from NPR's Lourdes Garcia-Navarro in Casablanca.

Morocco Votes To Curb The King

July 1, 2011 • An update on Friday's vote in Morocco on political reforms proposed by King Mohammed VI: Results are expected Friday night, though there is little doubt the "yes" votes will carry the day. 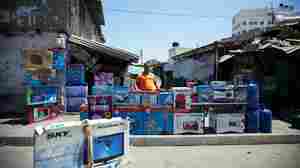 A store owner in a Gaza City market. Israel has eased the blockade of Gaza over the past year, and more commercial goods are reaching the territory. Jonathan Levinson for NPR hide caption

June 29, 2011 • This week, boats carrying activists from all over the world — including the U.S. — are setting sail from Athens, Greece, to the Gaza Strip in an attempt to break Israel's naval blockade of the coastal territory. But Israel has warned that the boats will not be allowed to reach Gaza.

June 29, 2011 • Since leaving Mossad, Meir Dagan has attacked Israel's leaders for their "reckless intent" to attack Iran over its suspected nuclear program. That someone so respected would talk publicly about one of the country's most sensitive issues has set tongues wagging.