One Last Hitchhike In A Moscow Taxi

November 26, 2011 • In Russia's capital, hitchhiking is a part of life. To avoid the burden of finding a cab, most Muscovites just flag down a passing car and negotiate a price. Often the ride is an adventure, but that's about to change. NPR's David Greene goes hitchhiking in Moscow.

One Last Hitchhike In A Moscow Taxi 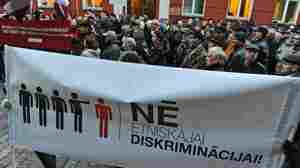 In September, the pro-Russia Harmony Center party won parliamentary elections in Latvia. But the governing coalition has left the party on the sidelines. Supporters of the Harmony Center party protest in front of the Parliament building during its opening session in Riga on Oct. 17. The banner reads: "No to ethnic discrimination." Raitis Purins/AFP/Getty Images hide caption

November 24, 2011 • In Latvia, a country haunted by its Soviet past, the rise of a Russian political party seemed unthinkable. But the global economic crisis hit the Baltic nation so hard that voters turned to Harmony Center, a party with Russian ties, promises of government help and a socialist economic platform.

October 31, 2011 • After the Soviet Union broke up, Belarus — squeezed between Russia and the European Union — kept its Soviet-style economy and its Soviet-style leader. President Alexander Lukashenko has clung to power all these years by promising full employment and by crushing his political opposition. Still, as Europe struggles through a major economic crisis, it's not paying much attention to this former Soviet state.

October 14, 2011 • Annie Leibovitz has shot some of the world's most famous portraits — from John Lennon to President Obama. And yet she risked losing ownership of her works to pay off a loan. That was 2009. Leibovitz says she's learned her lesson and is on better financial footing. She's opened a new exhibit in Russia.

Americans Say They Are Dissatisfied With Washington

October 3, 2011 • A recent poll shows Americans are dissatisfied with lawmakers in Washington, D.C. If the supercommittee fails to agree on a way to reduce the federal deficit, the negative feelings toward Washington could escalate.

Americans Say They Are Dissatisfied With Washington

September 30, 2011 • A U.S. Postal Service worker and a coordinator of a homeless shelter in Bradenton weighed in on the economic picture there in 2009, just after President Obama was elected.

September 29, 2011 • The Tampa Bay Rays rallied from a seven-run deficit Wednesday to beat the New York Yankees and advance to the playoffs. The win shuts out the Boston Red Sox, who lost a close game to the Baltimore Orioles.

September 29, 2011 • Saudi men are expected to cast votes Thursday in the kingdom's municipal elections. King Abdullah has promised that women can vote in the next election in four years, but that pledge has been overshadowed by the case of a woman sentenced to 10 lashes for violating the ban on driving.

September 28, 2011 • The Major League Baseball playoff teams are almost set, with the wild-card races coming down to the wire.

September 27, 2011 • The Greek government hoped to pass a new tax law in Parliament on Tuesday, despite wide opposition to the move by a Greek public already suffering under a policy of strict austerity. Ministers said the new property tax, which would be added to people's electricity bills, was needed to persuade the IMF and EU to release more bailout funds to prop up the Greek economy.

September 21, 2011 • A million-dollar bail agreement secured the release Wednesday of Shane Bauer and Josh Fattal, who had been sentenced to eight-year prison terms for illegal entry and espionage. A third American arrested with them, Sarah Shourd, was released last year. All denied any wrongdoing.

September 20, 2011 • Burhanuddin Rabbani, the head of the Afghan Peace Council and former president of Afghanistan, was killed in a bombing in the nation's capital.

September 19, 2011 • President Obama releases his plan to bring down the federal deficit on Monday. He will outline his plan to a congressional panel tasked with cutting more than $1 trillion in red ink.The proposal is expected to include new taxes, Medicare reductions and savings from troop withdrawals.

September 13, 2011 • Insurgents appear to have launched a coordinated attack in the heart of Afghanistan's capital city. Rocket propelled grenades and assault weapons could be heard across Kabul — targeting the U.S. Embassy and NATO headquarters.