May 19, 2011 • Russia's President Dmitry Medvedev and his Prime Minister Vladimir Putin are sending confusing signals about which of them intends to stand as candidate in next year's presidential election. Moscow is rife with speculation over which of the two men will emerge on top.

Even A Stiff Upper Lip Trembles For Royal Wedding

April 30, 2011 • Saturday is the first full day of marriage for Prince William and his new bride, Kate Middleton. The royal couple was wed Friday at Westminster Abbey, capturing attention around the planet. Much of the build-up focused on how foreigners, especially Americans, seemed more obsessed about the event than people in Britain. Still, thousands of Britons flocked to the wedding. NPR's David Greene went to find out what they were looking for.

Even A Stiff Upper Lip Trembles For Royal Wedding

April 29, 2011 • The royal nuptials offered pomp and circumstance on a grand scale. Hundreds of thousands of spectators gathered to catch a glimpse of Kate Middleton, Prince William and the royal entourage.

April 29, 2011 • A million well-wishers flooded central London to try to catch a glimpse of the wedding party. 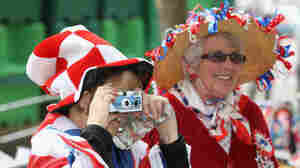 April 28, 2011 • After five months of planning and anticipation, it's showtime. Swarms of people have descended on London for the nuptials of Prince William and Kate Middleton. And while the bride and groom may be trying to take a low-key approach to the whole thing, London is anything but low key. 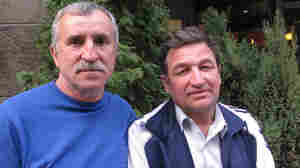 April 26, 2011 • A quarter-century after the world's worst nuclear accident, scars remain on the landscape and among the people, including firefighters exposed to radiation as they rushed to the burning reactor. The new nuclear crisis unfolding in Japan serves as another reminder of just how long recovery can take.

A View Of Gadhafi From One Of His Human Shields

April 3, 2011 • One of the people guest host David Green met while covering the conflict in Libya last month was a dentist named Mohammed Majdali. The 33-year-old is a loyal supporter of Moammar Gadhafi, and even volunteered to be a human shield in Gadhafi's compound.

A View Of Gadhafi From One Of His Human Shields

April 3, 2011 • The NCAA men's basketball tournament has been a story of upsets and broken brackets. Now that the field is down to two teams, Butler and Connecticut, guest host David Greene takes a look at the standings in ESPN.com's bracket tournament. 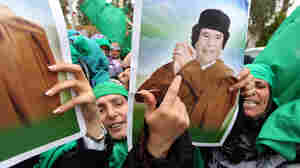 Libyan women hold pictures of leader Moammar Gadhafi in Tripoli earlier this month during a protest against the U.N. resolution authorizing a no-fly zone. The government, says NPR's David Greene, wants Tripoli to seem like a place full of people who revere Gadhafi. There are signs, however, that Gadhafi's grip on the capital could be loosening. Mahmud Turkia/AFP/Getty Images hide caption

In Libya, The Truth Is Often Tough To Pin Down

March 27, 2011 • Moammar Gadhafi's regime is using all its weapons — guns, tanks and propaganda — to prevent a nationwide movement for change. But there are signs Gadhafi's grip on the capital could be loosening. NPR's David Greene has spent the past month covering the conflict. As he prepares to leave Libya, he has a few reflections.

In Libya, The Truth Is Often Tough To Pin Down

March 24, 2011 • The Libyan government brought more than a dozen coffins to a cemetery along the Mediterranean Thursday, insisting the people died in coalition air strikes. U.S. and British officials have said their strikes haven't killed civilians. And some residents in Tripoli say quietly it's all a propaganda hoax by the Gadhafi regime.

March 23, 2011 • A defiant Moammar Gadhafi appeared on state television in Libya Tuesday night, rallying supporters from inside his military compound. Meanwhile, more explosions and anti-aircraft fire were heard in Tripoli just before sunrise. The coalition strikes have been damaging buildings as well as the Libyan leader's grip on power.

Libyan Government Wants To Be Able To Defend Itself

March 22, 2011 • Since Saturday, coalition forces have been launching airstrikes against Libyan air defenses, tanks, armored personnel carriers and other military hardware. The United Nations has refused an emergency request by Libya for a meeting to talk about the conflict. In the capital Tripoli, a government spokesman says the world is not allowing Libya to defend itself.

Libyan Government Wants To Be Able To Defend Itself

March 21, 2011 • Air strikes continued against installations and forces of the Libyan government. Secretary of Defense Robert Gates said Monday that the U.S. will turn over "primary responsibility" for the operations to allies in a matter of days. NPR's David Greene talks to Melissa Block with the latest. 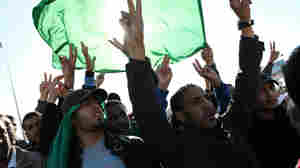 Men in Tripoli join in the part-protest, part-funeral for civilians said to have died during recent airstrikes in Libya. They gathered at a place along Libya's Mediterranean coast known as a cemetery for martyrs. Jim Wildman/NPR hide caption

March 21, 2011 • With U.S. and allied forces using missiles and bombs to strike at the heart of Moammar Gadhafi's military defenses, the Libyan leader finds himself standing alone against the world once more. But in Libya's capital, where part of Gadhafi's compound was hit Sunday, his supporters celebrated his continued defiance.