June 28, 2010 • In Kyrgyzstan, the interim government says voters have approved a new constitution that will allow the Central Asian nation to form a legitimate government after months of political turmoil and ethnic violence. The vote comes just weeks after deadly ethnic purges killed as many as 2,000 people and forced 400,000 ethnic Uzbeks from their homes.

Kyrgyz Vote On Constitution May Be Delayed

June 18, 2010 • It's been a week since ethnic violence erupted in Kyrgyzstan. And in a little more than a week from now, the central Asian nation is scheduled to vote on a new constitution. That appears increasingly unlikely as thousands of ethnic Uzbeks have fled their homes.

Kyrgyz Vote On Constitution May Be Delayed 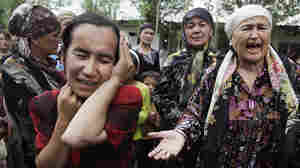 Ethnic Uzbek women from Kyrgyzstan plead for help at a refugee camp in Nariman on the border with Uzbekistan. Tens of thousands of minority Uzbeks have fled their homes in the wake of ethnic violence last week in southern Kyrgyzstan. Oxana Onipko/AFP/Getty Images hide caption

June 17, 2010 • Ethnic violence in southern Kyrgyzstan last week sent tens of thousands of minority ethnic Uzbeks fleeing, many to crowded camps in neighboring Uzbekistan. Now, the Uzbek government says it has taken in all the people it can handle, leaving thousands more refugees waiting at the border.

June 16, 2010 • In the devastated city of Osh, many residents emerged for the first time after days of ethnic violence. Some of them are searching for missing loved ones; others are looking for a way out of the city.

June 16, 2010 • In the central Asian nation of Kyrgyzstan, the city of Osh is in ruins. Hundreds of people have been killed and more than 100,000 have fled the ethnic fighting that has engulfed the country's second-largest city. Now there are claims by the United Nations that the fighting was orchestrated.

June 15, 2010 • Tens of thousands of people are believed to have fled their homes in Osh in Kyrgyzstan, to escape the ethnic fighting that has left most of the southern city in smoldering ruins. Hundreds are reported killed, neighboring Uzbekistan has closed its border to limit the flood of refugees, and thousands of women, children and the elderly are said to be stranded on the wrong side of the barbed wire.

June 15, 2010 • In Kyrgyzstan, tens of thousands of refugees are fleeing the ethnic rioting that has engulfed the southern part of the nation. Most are women, children and the elderly who have found their way to overcrowded refugee camps. Neighboring Uzbekistan has sealed its border, saying it cannot handle any more people who are seeking refuge from the violence.

May 27, 2010 • The U.S. government on Thursday is issuing a new estimate on the size of the oil spill in the Gulf of Mexico.

May 27, 2010 • Attorney General Eric Holder met Wednesday with police chiefs from more than a dozen cities across the country to talk about Arizona's new immigration law. The measure empowers police to question and arrest people suspected of being in the country illegally. The chiefs say it will cause distrust between immigrant communities and their officers and perhaps hamper police work.

May 26, 2010 • At least 30 people have been killed in street battles in Kingston, Jamaica, between masked gunmen and police backed up by thousands of troops. The gunmen are fighting to prevent the arrest of reputed drug kingpin Christopher Coke. He's wanted in the U.S. on drug charges.

May 25, 2010 • South Korea says it will exercise its right to self defense in case of further aggression by North Korea. The South accuses North Korea of torpedoing one of its navy ships in March. The South has launched a psychological campaign against Pyongyang showing North Koreans how much better life is in the South.

May 24, 2010 • The Pakistani investigation of the Times Square bombing plot has uncovered what is being described as a network of people motivated by resentment toward the U.S. Among those arrested is a business executive from a well-established catering firm in Islamabad. He's been taken into custody as part of a widening circle of possible links with the chief suspect in the bombing attempt, Faisal Shahzad.

Discontent Over Russia's Ruling Party At A Simmer

May 22, 2010 • In March, Vladimir Putin's party lost the mayor's race in the city of Irkutsk in a landslide. But frustration with the prime minister only goes so far. If there's a growing desire to show electoral independence, there's not yet a groundswell of support for revolutionary change.

Discontent Over Russia's Ruling Party At A Simmer 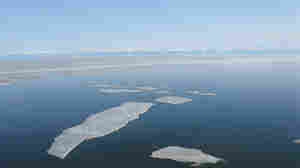 Russia's Lake Baikal, in southern Siberia, is roughly the size of Maryland. It's home to one-fifth of the world's freshwater supply and to unique species, including a freshwater seal. The United Nations refers to Baikal as Russia's "Galapagos." Now, environmentalists say it is under threat after the Russian government ordered the reopening of a paper mill on the lake's shore. David Greene/NPR hide caption

May 10, 2010 • The decision to reopen a paper mill on the shores of Russia's Lake Baikal, a U.N. World Heritage site, pits environmental concerns against economic ones. Supporters say the mill is safe and the jobs are necessary, but environmentalists fear for the lake's ecosystem. 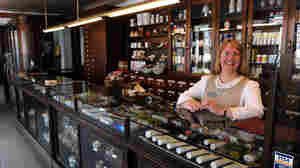 Ulle Noodapera is a pharmacist at Town Hall Pharmacy, which first opened for business in Tallinn, Estonia, in 1422. It's famous for selling aphrodisiacs — but even more famous for a piece of almond candy that allegedly cures those who are lovestruck. Raigo Pajula/AFP/Getty Images hide caption

April 28, 2010 • NATO foreign ministers gathered for a summit last week in Tallinn, the seaside capital of the former Soviet state of Estonia. One of the town's biggest attractions is a pharmacy dating from the 15th century that deals in herbs, wine and drugs to make you fall in — and out of — love.