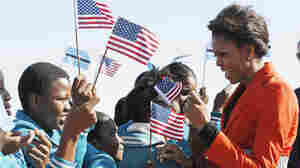 June 24, 2011 • Michelle Obama's trip to South Africa hasn't been met without controversy as she meets with impoverished third world families. But, says Charlayne Hunter-Gault of The Root, the first lady brings much needed attention to forgotten areas. 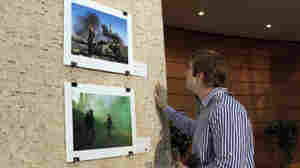 December 29, 2010 • In October, photographer Joao Silva lost both of his legs in a catastrophic landmine explosion. An auction of his photographs was recently organized in South Africa to defray the cost of medical bills.

April 5, 2010 • In South Africa, tensions are running high after the murder of one of the country's most notorious white supremacists. It's opening up old wounds dating back to the apartheid era. South African officials are trying to keep a lid on any racial violence and President Jacob Zuma has called for calm.

April 2, 2010 • In South Africa, a judge has ruled that a song once sung by anti-apartheid activists as a rallying cry against the white minority regime is now "unconstitutional and unlawful." The ruling has touched off a bitter debate in a country still grappling with its racist past.

March 10, 2010 • The lifestyle and business relationships of Julius Malema, an official of the ruling African National Congress, are coming under intense scrutiny. His dealings, among others, are prompting calls for "lifestyle audits" to help root out corruption.

December 28, 2009 • Of the millions of people who have fled turmoil in Zimbabwe, many have crossed the border to South Africa. Thousands have taken sanctuary in a single church, which is now at the center of a crisis. There have been allegations that in the chaos of the crowded building, abuses have occurred and minors have been sexually assaulted. 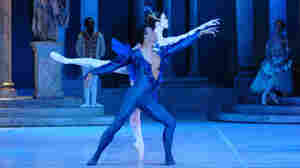 December 12, 2009 • Unless the South African Ballet Theatre finds sponsors for its budget, it will have to close down in the next three months. That would also mean ending its youth outreach programs that take ballet into five black townships and give young dancers a start.

November 18, 2009 • South Africa has one of the highest crime rates in the world. But what is widely being called the government's "shoot-to-kill" policy is being blamed for the recent murders of innocent bystanders, including the shooting death of a 3-year-old boy.

May 17, 2009 • A comedian from South Africa uses humor as an antidote to South Africa's modern ills and racist past. NPR's Charlayne Hunter-Gault has the story.

April 23, 2009 • The African National Congress, South Africa's ruling party, is expected to maintain power in the fourth democratic elections held since the end of apartheid. Jacob Zuma, leader of the ruling party, is a controversial but popular figure. NPR's Charlayne Hunter-Gault reports from Johannesburg on the challenges Zuma likely faces once he takes office.

April 22, 2009 • The 3-month-old Congress of the People, or COPE, is challenging the ruling African National Congress in South Africa's most intense election in its post-apartheid history. But COPE faces its own challenges, not least its relatively unknown presidential candidate, Mvume Dandala.

April 21, 2009 • South Africa holds national elections Wednesday, and among those casting ballots will be voters who were toddlers when South Africans won black majority rule. They have only ever known a free South Africa, and they don't necessarily share the majority's loyalty to the African National Congress.

April 20, 2009 • The controversial leader of South Africa's African National Congress will likely become the country's next president. A polygamist who has faced rape and corruption charges, Jacob Zuma is also a populist who has widespread respect for his role in winning black rule for South Africa.

April 9, 2009 • The Presidential election for South Africa is scheduled for later this month. Jacob Zuma, leader of the African National Congress Party, seems poised to win the election. Zuma was recently cleared of corruption charges but critics are still skeptical of his ability to lead. NPR's Charlayne Hunter-Gault is in Johannesburg and discusses the political climate.