Senate Votes To Acquit President Trump On Both Articles Of Impeachment

February 5, 2020 • The impeachment trial of President Trump comes to an end today. The Senate voted on two articles of impeachment and the president was acquitted of both: abuse of power and obstruction of Congress.

Senate Votes To Acquit President Trump On Both Articles Of Impeachment 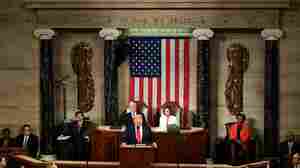 President Trump's State of the Union address laid bare his bitter partisan standoff with Democrats and left little doubt that legislative accomplishments between now and the election will be difficult. Mandel Ngan/AFP via Getty Images hide caption

What We Learned From Trump's State Of The Union Address

February 5, 2020 • Republicans loved the made-for-television moments in President Trump's third State of the Union speech as he made his case for reelection. Democrats did not.

Previewing The 2020 State Of The Union Address

February 4, 2020 • President Trump delivers his third State of the Union address tonight, aiming to break through the cloud of impeachment that has hung over his agenda and deliver an optimistic message to 2020 voters.

Previewing The 2020 State Of The Union Address

January 27, 2020 • After a report that former national security adviser John Bolton talked to the president about withholding security aid to Ukraine in return for targeted investigations, senators discussed next steps.

January 23, 2020 • Senators have wildly different assessments of how successfully House Intelligence Chairman Adam Schiff, D.-Calif., is making the case for more evidence and testimony in the Trump impeachment trial. 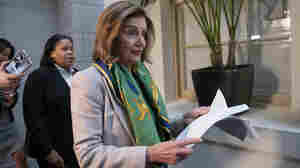 January 9, 2020 • The House of Representatives is expected to pass a resolution Thursday limiting the president's power to take military action against Iran without congressional approval.

January 6, 2020 • The White House delivered to Congress a formal notification of the U.S. drone strike that killed Iran's top general. Lawmakers are also dealing with the Senate impeachment trial of President Trump.

December 21, 2019 • The Trump impeachment pits two battle-hardened congressional tacticians, Nancy Pelosi and Mitch McConnell, against each other even though they serve in different chambers.

December 19, 2019 • Senate Majority Leader McConnell and House Speaker Nancy Pelosi sparred Thursday over next steps on impeachment, but signaled they're prepping for trial in 2020 that's expected to acquit the president.

December 12, 2019 • The House Judiciary Committee is expected to approve two articles of impeachment against President Trump, setting up a vote by the full House of Representatives next week.

December 11, 2019 • The House Judiciary Committee will gavel into session at 7 p.m. ET Wednesday to begin the process of putting the two articles of impeachment against President Trump into a final form.

December 8, 2019 • Now that it's official that Democrats will move forward with articles of impeachment against President Trump, lawmakers debate whether to include the allegations outlined in the Mueller report.

December 4, 2019 • The impeachment process moved into a new phase with the House Judiciary Committee hearing with legal scholars discussing what constitutes an impeachable offense. Democrats are sorting out next steps.