February 8, 2011 • As part of our series on new governors taking office around the country, we head to Pennsylvania, where new Gov. Tom Corbett won office with a promise to reduce the budget deficit while not raising taxes. 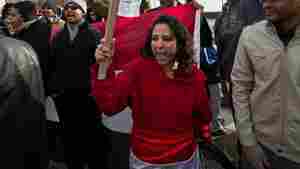 Americans demonstrate in support of the Egyptian people's protests against President Hosni Mubarak in front of the White House on Saturday. Nicholas Kamm/Getty Images hide caption

February 2, 2011 • As Egyptians continue to press their government for change at home, their countrymen around the world are showing support. Egyptian Americans watching the developments say they're anxious for their relatives and nervous about change but that it's time for the regime to go.

No-Fly List: FBI Says It's Smaller Than You Think

January 26, 2011 • Gulet Mohamed, a Virginia teenager, is back home after being forced to stay in Kuwait for more than a month. He says he couldn't return because he was on the U.S. no-fly list, though the government won't confirm or deny that. The list has grown, but the FBI says it's surprisingly small — just 10,000 names, 500 to 1,000 of whom are U.S. citizens.

The No-Fly List: FBI Says It's Smaller Than You Think 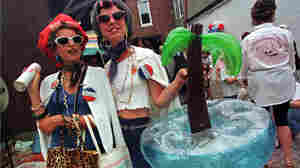 Baltimoreans To Businesswoman: Not So Fast, Hon

January 3, 2011 • A Baltimore businesswoman has trademarked the word "hon" for her own commercial use, but some in the city are protesting, claiming the expression belongs to no one and everyone.

Baltimoreans To Businesswoman: Not So Fast, Hon

December 27, 2010 • With cuts in the military budget coming in the new year, small defense-related businesses are trying to stay afloat. At a recent conference in Maryland, representatives from more than 250 of those businesses gathered to get tips on how to survive the cuts. 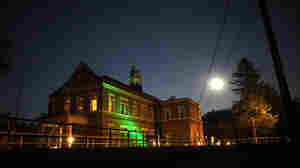 The former administrative building of the Pennhurst State School and Hospital is now the main location for the Pennhurst Asylum, a Halloween haunted event in Spring City, Pa. Coburn Dukehart/NPR hide caption

October 29, 2010 • Outside Philadelphia, a local businessman has converted a former mental asylum into a haunted house attraction. Mental health advocates say the transformation demeans a painful past that should not be forgotten. 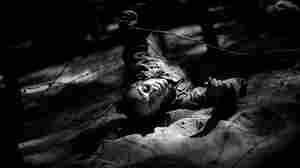 Pvt. E-2 David Mangold crawls under barbed wire during a series of obstacles in a training course. For the first time in 30 years, the U.S. Army has changed the way it trains new recruits. Core exercises and sprints have replaced bayonets and long runs. David Gilkey/NPR hide caption

October 27, 2010 • The Army says 79 percent of suicides occur within the first three years of service, whether soldiers have been deployed or not. The trend points to major transitions within the soldier's life as one of the main causes. 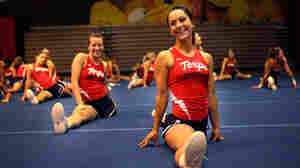 October 7, 2010 • Christine O'Donnell, the GOP nominee for a Delaware Senate seat, is being lampooned in the national media for comments she's made in the past about dabbling in things like witchcraft. But the national debate has little influence on her supporters in Delaware, who say they'll vote for her in spite of the unflattering media portrayals. 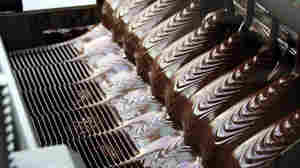 October 6, 2010 • Workers will move into a new factory just outside Hershey, Pa. Founder Milton Hershey originally envisioned the company town as a "worker's paradise," but the company now says closing the historic factory and cutting jobs is needed to stay competitive. 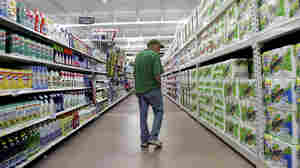 October 2, 2010 • On the last day of every month, low-income families descend on many Walmarts to stock up on necessities. That's because it's when their food stamps and government checks kick in. Retailers take note and stock their shelves accordingly with larger packs of items.

September 29, 2010 • Fannie Mae is throwing a lifeline to military families facing foreclosure. The mortgage agency and the Army this week announced measures including a mortgage payment forbearance of up to six months when the death or injury of a service member on active duty causes hardship for military families with a mortgage obligation. 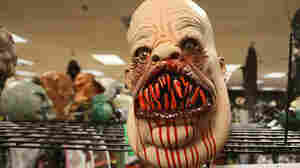 Pop-up stores, like this one in Burbank, Calif., last year, disappear once a holiday is over. David McNew/Getty Images North America hide caption

Boo! Pop-Up Stores Popping Up All Over

September 19, 2010 • Retailers are getting ready for the holiday shopping season, and to avoid the cost of long-term leases and permanent locations -- as well as long-term obligations to workers -- more and more companies are selling their goods out of "pop-up" stores.

Boo! Pop-Up Stores Popping Up All Over 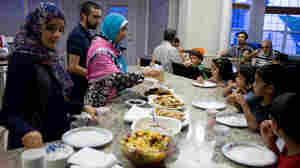 The Munir family gathers for dinner during an Eid celebration on Thursday. Yanina Manolova for NPR hide caption

September 11, 2010 • For the first time, the feast marking the end of Ramadan coincides with the anniversary of the Sept. 11, 2001, attacks. The timing -- in the midst of heightened anti-Islamic sentiments -- could not be more awkward for American Muslims.  Some communities are scaling back their festivities, or postponing them, so they're not interpreted as a celebration of the attacks.

August 19, 2010 • Imam Feisal Abdul Rauf has been traveling while debate continues about his proposal for an Islamic center near ground zero. In his absence, critics have looked to past interviews for hints of terrorist sympathies. But Rauf's supporters say he has dedicated himself to peace and that his attempts to explain terrorism are not embraces of it.