Accessibility links
Greg Smith Greg Smith is the composer of four of NPR's most distinctive themes: "Talk of the Nation", "Day to Day", "The Motley Fool Radio Show" and Weekend Edition Sunday's "Voices in the News" theme.

Greg Smith is the composer of some of NPR's most distinctive themes, including the theme of Weekend Edition Sunday's "Voices in the News" feature and former NPR programs Talk of the Nation, Day to Day, and The Motley Fool Radio Show. Aside from his musical contributions to NPR, he spent many years toiling in the trenches at the network. Greg started at NPR as a production assistant for Morning Edition in 1980 and over the next 20 years produced and/or edited many of the network's news programs, leaving the NPR's full-time staff in 1999 as senior editor of Weekend Edition Sunday.

In fact, his first theme for NPR was for the "Voice in the News" segment of Weekend Edition Sunday. "We were developing a segment for the show that would feature the most significant news sound clips of the past week," Smith says, "and I couldn't find a piece of music that would be somewhat serious and have a clean ending. I could hear in my head what I wanted, so I went to my music studio and had my drummer lay out a repetitive beat on the hi-hat and started playing along. It worked. What you hear on the air is the sixth take of that session."

Smith is fluent on a number of musical instruments and has played on and/or produced numerous albums. He has recorded six solo albums of his work and composed a number of film soundtracks. Aside from his music, Smith has worked for Lucasfilm, Ltd. and IMAX Films, among others, as a producer, director, sound recordist and/or post-production editor on more than 50 feature and documentary films.

He now runs his own film and music company, Pros from Dover Productions and currently is a Professor of Film at American University in Washington, D.C. Greg is married to Margaret Low Smith, whom he met when both were working the overnight for Morning Edition. They live in Rockville and have two sons, Benjamin and Jeremy. 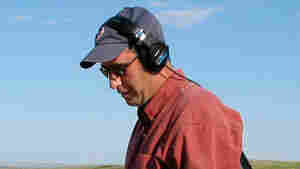 How It Sounds: To Be A Sound Guy

November 8, 2013 • A thunderstorm, a gunshot, classroom buzz and ivory keys — a quartet of sounds that reveal the life of a sound guy.