November 7, 2005 • Stevie Wonder's new album A Time To Love is his first in a decade. He collaborates with Prince, gospel singer Kim Burrell and his own daughter, Aisha Morris, last heard splashing in the tub on the 1976 hit "Isn't She Lovely."

October 11, 2005 • Although she has released five albums since 1999, singer-songwriter Laura Veirs remains largely unknown in the United States. Critic Tom Moon believes her new CD, Year of Meteors, will change that.

September 13, 2005 • This week, the Rolling Stones release a new album, their first studio effort in eight years. It's called A Bigger Bang. Reviewer Tom Moon says the spare, cohesive style of the songs demonstrate why the Stones are such a unique rock band.

August 2, 2005 • Tom Moon has a review of the new album from the Kinshasa-based band Konono. It's called Congotronics. The group uses thumb piano and voices via megaphone. 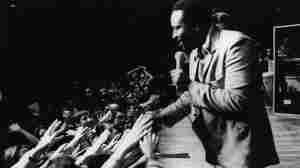