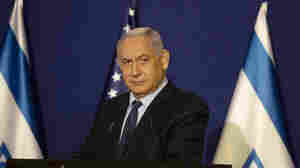 November 23, 2020 • It is the first such meeting between Israeli and Saudi leaders to be reported widely in Israeli media. Netanyahu reportedly met Saudi Crown Prince Mohammed bin Salman.

Pompeo's Latest Israel Trip Could Have Implications For Biden's Presidency

November 20, 2020 • With just a couple months left for the Trump administration, Secretary of State Mike Pompeo is in the Middle East setting new pro-Israel policies that could affect the Biden presidency.

Pompeo's Latest Israel Trip Could Have Implications For Biden's Presidency

November 16, 2020 • Israelis and European diplomats faced off on a Jerusalem hill where Israel plans to build a new settlement. It's making the move before the Biden administration takes over. 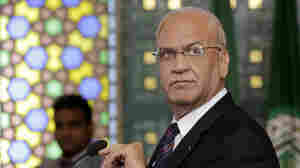 November 10, 2020 • Often the voice of the Palestinians in peace talks with Israel, Erekat's pursuit of peace through negotiation never prevailed. He was 65.

November 8, 2020 • World leaders are congratulating President-Elect Joe Biden on his victory and they include some who have been close allies of President Trump. 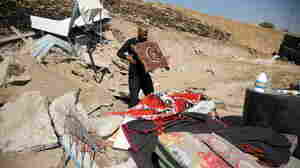 A Palestinian man collects his belongings after his structure was demolished by Israeli forces in the Jordan Valley in the Israeli-occupied West Bank on Oct. 19. Palestinian groups say another hamlet was destroyed in the same area on Tuesday. Raneen Sawafta/Reuters hide caption 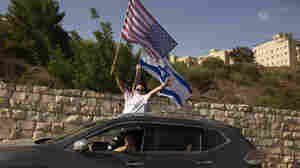 Supporters of President Trump wave U.S. and Israeli flags from a car last week headed for a rally outside the U.S. Embassy in Jerusalem. Maya Alleruzzo/AP hide caption

November 3, 2020 • Israel has one of the largest populations of eligible U.S. voters abroad. Many are expected to vote for the incumbent. Palestinians disfavor Trump, but some Palestinian Americans have avoided voting.

A Lot Is Riding On The U.S. Election For Israelis, Palestinians

A Lot Is Riding On The U.S. Election For Israelis, Palestinians 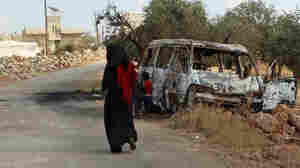 A woman walks past a wrecked van near the northwestern Syrian village of Barisha. Local residents and medical staff told NPR that noncombatant civilians who were in the van were injured and killed last year the night of the U.S. raid on the compound of ISIS leader Abu Bakr al-Baghdadi. The military says the men were combatants but found no weapons. Ibrahim Yasouf/AFP via Getty Images hide caption

October 27, 2020 • After NPR reported claims of civilian deaths in the operation against the ISIS chief, Central Command says the men showed "hostile intent," but it found no weapons or signs they fired at U.S. forces.

Is The U.S. Portraying Civilians As The Enemy?

October 26, 2020 • An NPR report prompted the U.S. to investigate if civilians were killed during the raid on the ISIS leader a year ago. The results still leave questions about whether innocent men were killed.

Is The U.S. Portraying Civilians As The Enemy? 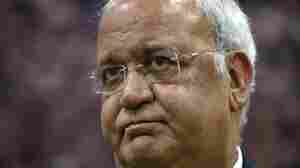 Saeb Erekat, Secretary-General of the Palestine Liberation Organisation and chief Palestinian negotiator, talks to reporters in the West Bank city of Ramallah in March. Erekat is being treated in a Jerusalem hospital after contracting COVID-19. Abbas Momani/AFP via Getty Images hide caption

October 19, 2020 • Palestinian politician Saeb Erekat is in critical but stable condition in Hadassah Hospital, where he has been moved after reportedly testing positive for coronavirus earlier this month.

Palestinians Throw Support For 'Anybody But Mr. Trump'

October 18, 2020 • After seeing four years of moves favoring Israel by the Trump administration, Palestinians are hoping for Joe Biden to win the election.

Palestinians Throw Support For 'Anybody But Mr. Trump'

A Biden Win Could Mean A Loss For Israel's Netanyahu

October 17, 2020 • Israel's Benjamin Netanyahu has been one of President Trump's closest allies, with each of them helping the other's political fortunes. Now that could be in doubt.

A Biden Win Could Mean A Loss For Israel's Netanyahu