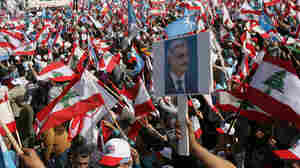 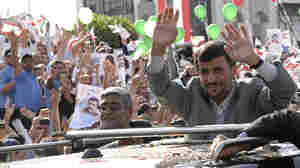 September 24, 2010 • Government troops in Yemen have been battling al-Qaida militants in a remote southern town since the beginning of this week. The government acknowledges that some 2,000 civilians have fled their homes in the battle zone. Other reports put the figure much higher. 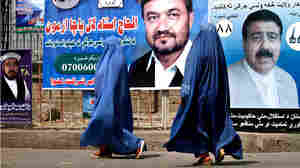 September 17, 2010 • Afghanistan elects a new parliament on Saturday. But the credibility of the election is at risk. As the war between the Taliban and U.S.-led coalition continues and predictions of widespread election fraud grow, many voters say they may stay home. 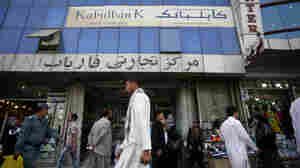 Afghans walk past a branch of Kabul Bank in the capital on Wednesday. Shareholders met this week to decide the fate of the bank after suspected irregularities raised concerns over the country's biggest private financial institution. Ahmad Massoud/AP hide caption

September 16, 2010 • Alleged corruption involving a private bank in Afghanistan reportedly benefited President Hamid Karzai's relative. The government has responded quickly to probe the bank's troubles. But some analysts say the reaction is more about politics than finding ways to eliminate corruption. 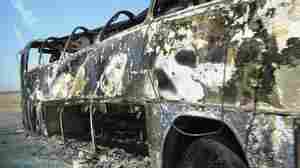 Afghanistan’s Ring Road, the main highway connecting this war-ravaged country, is littered with burned out vehicles like this bus. They were destroyed by roadside bombs or rocket propelled grenades fired by insurgents. Soraya Nelson/NPR hide caption

September 6, 2010 • U.S. taxpayer money paid for paving much of Highway 1 in Afghanistan, the road that links Afghans and their economy across a mountainous country. But roadside bombs and huge craters make for a difficult obstacle course in the cross-country trek. 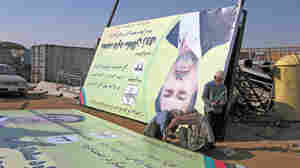 September 6, 2010 • Any American politician will tell you that campaigning is vital to winning an election. But in Afghanistan, candidates say campaigning is likely to get you killed. As a result, many of the candidates in the upcoming Afghan elections are finding it difficult to get their message out.

Afghan Government To Back Kabul Bank

September 3, 2010 • Top executives at Afghanistan's largest private bank resigned this week amid allegations of gross mismanagement. That left the government scrambling to calm fears and prevent a run on the bank.

Afghan Government To Back Kabul Bank

August 30, 2010 • The fight against corruption in the Afghan government has received another setback with the dismissal of a senior justice official for his role in pursuing cases against some of President Karzai's most senior officials. 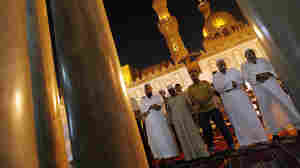 Muslim Egyptian men pray during the Islamic holy month of Ramadan at Cairo's historic Al-Azhar mosque in September 2009. Some experts say many Egyptians have lost the meaning of the holy month, spending too much time after hours partying, eating and watching TV. Khaled Desouki/AFP/Getty Images) hide caption

In Egypt, Turning Back The Clock For Ramadan

August 11, 2010 • The Muslim world begins celebrating the holy month of Ramadan, fasting from dawn to dusk, and breaking the daily fast by celebrating with family and friends. In Egypt, there are some worries about the excess and government plans to turn back the clock, bringing sundown an hour earlier during the month.

In Egypt, Turning Back The Clock For Ramadan 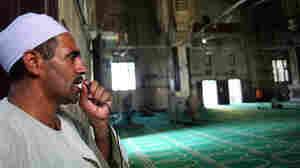 Ahmed Abdel Aziz sings the call to prayer, or the azan, at Al- Maghfara Mosque in a suburb of Cairo last month. Holly Pickett for NPR hide caption

In Cairo, An End To The Cacophony Of Calls To Prayer

August 5, 2010 • In Egypt's sprawling capital, no longer will the call to prayer be delivered locally by each mosque. Instead, the government's Ministry of Religious Endowment has announced it will broadcast a single call from a downtown studio. Many Egyptians are unhappy with the change set to commence next week.

In Cairo, An End To The Cacophony Of Calls To Prayer