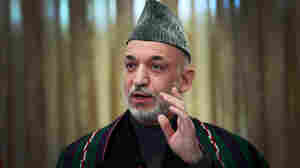 With Election Dispute Over, The Pressure Is On Karzai

November 5, 2009 • In Afghanistan, a runoff election was called off this week, handing incumbent President Hamid Karzai a second term. Many Afghans are adamant that Karzai deliver change this time around, and his Western partners have plans to set benchmarks he will have to meet.

With Election Dispute Over, The Pressure Is On Karzai

November 2, 2009 • Afghanistan's election commission has cancelled plans for a presidential runoff vote, and declared Hamid Karzai the winner. The move followed a decision by Karzai's only remaining challenger, Abdullah Abdullah, to pull out of the race.

November 2, 2009 • The country's election commission announced Monday that Hamid Karzai will get another term as Afghan president. Karzai was supposed to face a runoff election on Saturday, but there was no point once it became clear he was the only candidate running. His challenger Abdullah Abdullah withdrew Sunday.

Challenger Pulls Out Of 2-Man Runoff In Afghanistan

November 2, 2009 • Afghan President Hamid Karzai will apparently remain in power. Karzai's only challenger dropped out of the runoff Sunday. Former Foreign Minister Abdullah Abdullah cited concerns about a corrupt election process. Abdullah was widely expected to lose in the next round, and power sharing talks had failed.

Challenger Pulls Out Of 2-Man Runoff In Afghanistan

October 28, 2009 • Taliban militants stormed an international guest house in Kabul on Wednesday, killing at least 12 people, including half a dozen U.N. staffers. The Taliban said it was part of an offensive related to the Nov. 7 runoff vote for the presidency. The militants have repeatedly vowed to disrupt the poll.

Ahead Of Afghan Runoff, Taliban Strikes

October 28, 2009 • A Taliban attack on an international guesthouse in the heart of Kabul killed at least 12 people — including U.N. staff members. A spokesman for the Taliban said it was the first of many attacks they plan to carry out to disrupt next month's runoff election.

Ahead Of Afghan Runoff, Taliban Strikes

October 26, 2009 • Throughout the war in Afghanistan, most of the insurgent attacks have occurred in the eastern and southern parts of the country. But the northern part of the country has become unstable as well. Afghans' growing frustration with their government, and tense relations between the locals and Western forces, are helping the militants gain traction in the once-stable north.

October 20, 2009 • Afghanistan will hold a runoff election next month to determine who will lead the war-torn country. Incumbent President Hamid Karzai made the announcement after bowing to American and European pressure to accept investigators' findings of widespread fraud during the first round of voting two months ago. The findings by the Electoral Complaints Commission stripped Karzai of close to a million votes and cost him a first-round win.

October 20, 2009 • Afghanistan's election commission has ordered a runoff between President Hamid Karzai and his top challenger, former Foreign Minister Abdullah Abdullah in the August presidential election. Karzai has accepted the findings of a fraud investigation that dropped his vote total below 50 percent. He has also endorsed the runoff. The second round of voting is set for Nov. 7.

October 20, 2009 • International investigators have found there was massive fraud during Afghanistan's presidential election in August. The finding will cost incumbent Hamid Karzai nearly a third of his votes as well as a first-round victory. Karzai has yet to say whether he'll agree to a runoff election with his main rival, former Foreign Minister Abdullah Abdullah.

October 19, 2009 • The group looking into voter fraud in the Afghan presidential election has sent the results of its investigation to the country's election commission. If the U.N.-backed probe determines there are enough fraudulent ballots to tip President Karzai's vote below 50 percent, the incumbent will face a second round against his main challenger, former Foreign Minister Abdullah Abdullah. 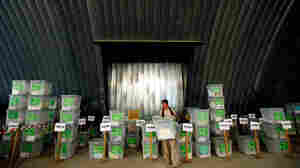 October 5, 2009 • The long-awaited audit of suspect ballots from Afghanistan's controversial presidential election began Monday. But only hours after the audit began, it was raising more questions than answers.

October 5, 2009 • In a remote part of Afghanistan over the weekend, one of the deadliest attacks against American bases there killed eight U.S. troops and three Afghan soldiers, as well as an Afghan policeman. The fierce battle highlights the difficulty U.S. forces face in defending Afghans and themselves against a growing insurgency.

September 25, 2009 • Five weeks after Afghanistan's presidential elections, it's still unclear who will lead the country. Afghan and international officials are now hoping to break the logjam by agreeing to review ballots at about 10 percent of the nearly 3,100 polling stations flagged as suspicious by a U.N.-backed watchdog.

September 9, 2009 • British commandos rescue a New York Times reporter held hostage by the Taliban in northern Afghanistan. Reporter Stephen Farrell was unharmed, but his Afghan interpreter was killed in a shoot-out.