December 17, 2012 • In Egypt, unofficial results show the country's controversial draft constitution was narrowly approved in the first stage of a referendum held this past Saturday. The draft constitution has deeply divided Egyptians. The second round of voting will take place this Saturday. 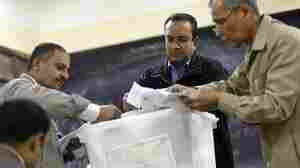 Polling station officials count ballots in Cairo on Dec. 15, at the end of the first day of vote in a referendum on a new constitution. AFP/Getty Images hide caption

December 16, 2012 • The outcome is unofficial at this point as the government has said it will not announce official results until the referendum concludes in the rest of Egypt next Saturday. Though voting counts differed, most major supporters and opponents of the constitution reported it had received a majority "yes" vote. 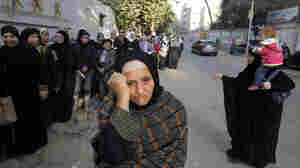 Women wait in line outside a polling station to vote on a disputed constitution drafted by Islamist supporters of President Mohammed Morsi in Cairo on Saturday. Amr Nabil/AP hide caption

December 15, 2012 • Turnout was high Saturday morning at polling stations in several Cairo neighborhoods where Egyptians are deciding whether to approve their country's controversial draft constitution.

December 14, 2012 • Egyptian President Mohamed Morsi says he's determined to hold a referendum on the draft constitution on Dec. 15. But it's an election fraught with problems for him and his opponents. It's unlikely to be a free and fair vote, with most judges who would be the ones to serve as independent monitors being on strike, leaving its legitimacy in doubt. His opponents, meanwhile, are in trouble if they decide to boycott the vote or not. Not voting gives Morsi and the Muslim Brotherhood a guaranteed victory. But if opponents do vote and lose, then their efforts to quash the draft document and Morsi's power grab would lose legitimacy.

December 11, 2012 • Supporters and opponents of Egypt's President Mohammed Morsi were on the streets of Cairo again on Tuesday, staging demonstrations in different parts of the capital. With the dueling camps separated, the chances of violence have decreased, but there was some early Tuesday in the city's iconic Tahrir Square. Morsi's opponents are demanding that he postpone a scheduled referendum on a draft constitution they see as flawed. But the president insists the vote will go ahead as scheduled on Saturday. Audie Cornish talks to Soraya Sarhaddi Nelson.

December 10, 2012 • Over the weekend, Egyptian President Mohammed Morsi rescinded most of a temporary order that elevated his powers above judicial review. But he did not concede on demands to postpone a vote on a new constitution.

December 7, 2012 • The power grab by Egyptian President Mohammed Morsi and the drafting of the country's constitution have caused the mostly secular opposition to come together for the first time since the revolution drove President Hosni Mubarak from power.

December 6, 2012 • Egyptian army tanks were deployed around the presidential palace in Cairo on Thursday after a night of clashes between pro and anti-government protesters outside the palace. Audie Cornish talks to Soraya Sarhaddi Nelson. 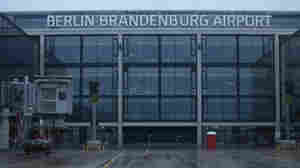 December 2, 2012 • The new international airport in Berlin has become a major embarrassment to Germany. The airport was supposed to replace the three airports that operated in the once-divided city. But with major cost overruns and safety issues, the project has been delayed three times already.

Opposition Protest In Cairo A Rare Show Of Unity

November 28, 2012 • Protesters thronged to Tahrir Square on Tuesday night to protest the Egyptian president's recent decision to give himself and a committee drafting a new constitution unchecked power. It was the largest crowd at a demonstration in Egypt since Mohammed Morsi became president last summer and displayed a rare unity of the secular opposition in Egypt.

Opposition Protest In Cairo A Rare Show Of Unity

Under Fire, Egypt's Morsi To Meet With Judges

November 26, 2012 • After Egyptian President Mohammed Morsi helped broker a cease-fire between Israel and Hamas, he expanded his powers at home by exempting his rulings from judicial review until a new constitution is ratified. Egyptian judges have condemned the move, and some have called for a strike.

Under Fire, Egypt's Morsi To Meet With Judges

November 25, 2012 • In Egypt, the main association of judges is calling for a nationwide strike by the country's courts to protest last week's power grab by the Egyptian president. So far, few courts are taking part. 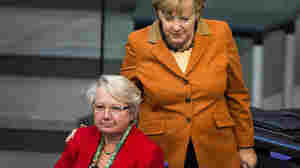 November 24, 2012 • Several top government officials have been caught up in an embarrassing cheating scandal — including the defense minister, who resigned as a result, and the education minster, who is under investigation for her doctoral dissertation. An informal group of "plagiarism police" has undertaken the hunt.

November 20, 2012 • Berlin is known as the "wild boar capital" in Germany, with thousands of the animals roaming its residential neighborhoods. In the past, the city and animal rights activists battled over hiring hunters to kill the streetwise swine, who cause a lot of damage. But with attacks like the one in late October in which four people were injured by a male boar, curbing the wild pig population in the German capital is a growing priority. 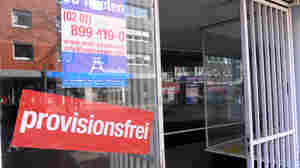 The main street in Oberhausen — Germany's most indebted city — is dotted with vacancies. Despite its economic woes, Oberhausen, like other western German cities, must make "reunification" payments to the former communist East. The payments help explain German voters' reluctance to bail out Greece and other eurozone countries. Patrik Stollarz/AFP/Getty Images hide caption

November 12, 2012 • Oberhausen — Germany's most indebted city — borrows nearly $500,000 daily. It needs the funds not just to keep itself afloat but also to make regular payments intended to revitalize former East German cities. Critics say the payments are unwarranted when Oberhausen itself is in such dire straits.