March 28, 2011 • Egypt's ruling military council announces that parliamentary elections will be held in September. It also says the widely reviled emergency law, in effect for 30 years, will be lifted before those elections take place. 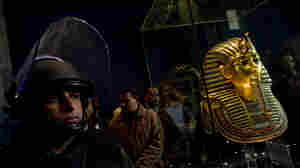 A soldier stands guard next to Tutankhamen's gold mask inside the Egyptian Museum on Feb. 16. Looters broke into the museum in Cairo's Tahrir Square in late January. Pedro Ugarte/AFP/Getty Images hide caption

March 22, 2011 • Egypt's historical sites and museums were hit by vandalism and looting during the country's uprising. Even now, archaeologists and experts complain that far more needs to be done by the new government to protect Egypt's heritage.

March 21, 2011 • Voters in Egypt overwhelming approved changes to the constitution. The landmark referendum was held over the weekend, and the vote prepares the way for new elections. But not everyone is happy, leaders of Egypt's revolution wanted the people to vote against the changes.

March 20, 2011 • Egyptians voted overwhelmingly in favor of constitutional amendments this weekend in the first free election held in their country in more than half a century.

Egyptians Vote On Amendments To Constitution

March 19, 2011 • On Saturday, Egyptians are voting in a referendum on nine amendments to the country's restrictive constitution. Many of those who demonstrated to overthrow former President Hosni Mubarak are urging a "no vote" because they don't accept the constitution that allowed his authoritarian rule.

Egyptians Vote On Amendments To Constitution

Egypt Forges Ahead With Vote On Referendum

March 16, 2011 • In Egypt, finding politicians to run the country with the requisite experience and who aren't out of favor with the public is a challenge. Whoever ends up running the country, and what kind of powers the president will have, depend on a controversial referendum scheduled for a vote on March 19th.

Egypt Forges Ahead With Vote On Referendum 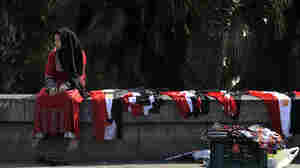 A young woman sells Egyptian flags in central Cairo on Monday. Voters are scheduled to go to the polls on Saturday for a referendum on proposed constitutional amendments. Aris Messinis/AFP/Getty Images hide caption

Egypt Moves Ahead With Vote Despite Concerns

March 15, 2011 • Egypt's military rulers are charging ahead with a referendum scheduled for Saturday that will determine who can run for president. The referendum is widely opposed by the leaders of the country's revolution. "Why rush at the expense of democracy?" asks Mohamed ElBaradei.

Egypt Moves Ahead With Vote Despite Concerns

March 12, 2011 • In Egypt this past Friday, many protestors abandoned angry rants against their rulers to instead push for reconciliation between their country's Christians and Muslims. The call for national unity comes after a week of fatal clashes over the burning of a church in a village south of Cairo.

March 10, 2011 • Is Egypt's revolution on the rocks? The army has taken over Tahrir Square and sectarian clashes between Christians and Muslims have left more than a dozen people dead. All this as Egypt seeks to make the transition to democracy. 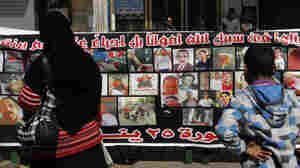 Egyptians look at a banner that says "Martyrs of the January 25th Revolution." The banner bears pictures of demonstrators who were killed during anti-government protests. Nasser Nasser/AP hide caption

Did Egyptian Protesters Die In Vain?

March 9, 2011 • Relatives say their main frustration is that there are no investigations — let alone arrests — of those responsible for the killing of protesters during Egypt's revolution. They question whether the price their loved ones paid was worth it.

March 9, 2011 • The storming of Egypt's state security and other government compounds has netted Egyptians their first look at secret files documenting government atrocities during former President Mubarak's 30-year rule. Many of the records are being posted on public media sites. Some argue the information is private and belongs to the people cited in the files. Others hope to use the documents to bring officials to justice.

March 6, 2011 • Protesters stormed the headquarters of Egypt's state security agency this weekend. The agency was accused of some of the worst human rights violations during the 30-year rule of Hosni Mubarak, and Egyptians aren't waiting for the new government to dismantle it.

March 3, 2011 • Egypt's Interim Prime Minister Ahmed Shafiq has resigned, meeting a key demand of pro-democracy protesters still rallying in the streets of Cairo. Shafiq — a former Air Force commander — was appointed by ousted President Hosni Mubarak. It was one of the president's last acts before he resigned from the presidency.

February 18, 2011 • A growing number of workers are going on strike despite pleas from the Egyptian military government to stop. The government complains the labor unrest is deepening Egypt's already multi-billion dollar financial crisis, brought on by the popular anti-government revolt.