March 26, 2018 • The U.S. and Canada are also joining the effort, in response to the attempted killing of a former Russian double agent and his daughter in Great Britain at the beginning of March. 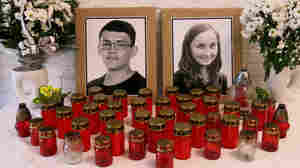 A memorial to slain journalist Ján Kuciak and his fiancée, Martina Kusnírová, has been set up in the lobby of Aktuality.sk. Since they were killed, the news site's office building has been guarded by the police and private security guards. Soraya Sarhaddi Nelson/NPR hide caption

March 20, 2018 • An investigative journalist and his fiancée were killed, sparking a political upheaval. But that failed to quell the largest protests in the Central European country since the 1989 Velvet Revolution.

March 17, 2018 • The murder of a a young investigative journalist in Slovakia led to street protests and the collapse of the government. Now protesters want fresh elections to sweep away corruption. 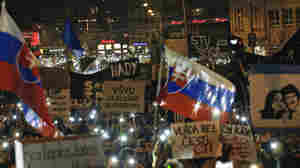 People flash the lights of their mobile phones as they celebrate the resignation of Prime Minister Robert Fico and his government as a way out of the political crisis triggered by the killings of investigative journalist Ján Kuciak and his fiancée Martina Kusnírová, during a rally in Bratislava, Slovakia on Friday. Darko Vojinovic/AP hide caption

Slovaks Take To The Streets After Prime Minister's Resignation

March 16, 2018 • Protesters are demanding new elections and arrests for the murders of investigative journalist Ján Kuciak, who had been reporting on political corruption, and his fiancée Martina Kusnírová.

March 15, 2018 • The government has resigned after weeks of political turmoil in the country. The move follows the slaying of a journalist who was investigating alleged corruption involving foreign businessmen. 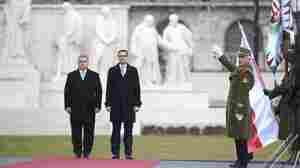 March 12, 2018 • While some EU leaders seek unity over budgets and refugee policies, member states Poland and Hungary are building a unified front to thwart the bloc's plans.

February 27, 2018 • A high court in Germany says a city suffering from excessive air pollution can ban older diesel vehicles from its streets, if officials cannot find other ways to reduce nitrogen oxide emissions to E.U.-mandated levels. 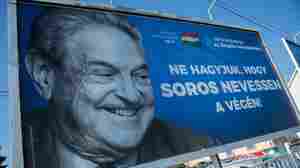 February 23, 2018 • Hungary's government has proposed a series of bills it says will curb illegal immigration. Critics say the motivation is to cripple NGOs linked to U.S. financier George Soros. 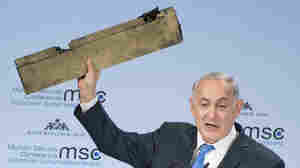 At the Munich Security Conference in Munich on Sunday, Israeli Prime Minister Benjamin Netanyahu holds a part of a downed drone that he said came from an Iranian drone shot down over Israeli airspace earlier this month. Lennart Preiss/AP hide caption

February 19, 2018 • Confrontation and ultimatums replaced compromise and consensus at the meeting, where North Korea and the Iran deal topped the agenda. A commentator described it as "the end of the road" for diplomacy.

February 16, 2018 • Hungary and Poland have grown closer together as their populist leaders come under criticism from the rest of the European Union.

February 7, 2018 • Two German political parties have reached a deal to form a government. If approved the deal would mean the country would avoid new elections.

February 5, 2018 • Advocates say Hungary is only allowing two asylum seekers in each day. They say that violates international law, and is causing panic among the thousands waiting to cross from Serbia. 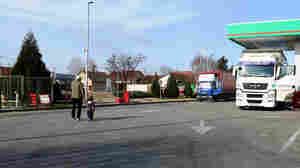 February 3, 2018 • Hungary has secretly reduced the number of asylum-seekers it will allow into the country to two per day, one at each transit zone. Hungary is the main access to Europe from the Balkan route. 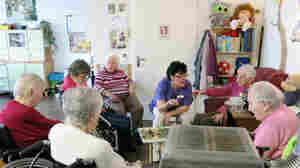 January 22, 2018 • Trips down memory lane — to a highly regimented place that no longer exists — are the hallmark of this Dresden home for the elderly.

Audio for this story is unavailable.
More from Soraya Sarhaddi Nelson