June 30, 2017 • The German parliament has voted to impose fines of up to $57 million on social media companies that fail to remove "obviously illegal" hate speech within 24 hours of it being posted.

How Europe Is Grappling With Increased Cybersecurity Threats

June 29, 2017 • European cybersecurity experts have been meeting in Brussels to discuss ways to combat recent attacks, including Tuesday's malware infection of thousands of business computers.

How Europe Is Grappling With Increased Cybersecurity Threats

June 27, 2017 • Security will be tight for next month's Group of 20 summit in Hamburg. Most leaders are bringing their own security detail. But Germany told Turkey's president that his guards aren't welcome.

Many In Eastern Ukraine Want To Join Russia

June 24, 2017 • Vladimir Putin insists Russia doesn't want to annex separatist enclaves in eastern Ukraine, but many residents, who already use the Russian ruble and depend on Russia in many ways, wish he would.

Many In Eastern Ukraine Want To Join Russia

June 21, 2017 • International monitors say most cease-fire violations in eastern Ukraine occur in five hot spots. People on both sides are living a marginal existence, punctuated by artillery fire and mine blasts. 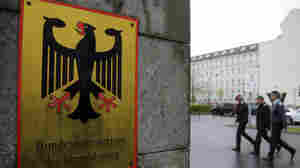 German forces Bundeswehr officers enter the German Defense Ministry prior to a meeting between Defense Minister Ursula von der Leyen and about 100 top officers in Berlin last month. The meeting was about the arrest of an army officer on suspicion that he was part of a small group planning a far-right attack. Markus Schreiber/AP hide caption

June 18, 2017 • The arrests in April of two army officers accused of plotting assassinations have raised serious questions about the extent to which far-right and neo-Nazi sympathizers are present in the military.

May 30, 2017 • Hungarian Prime Minister Viktor Orban's government is trying to shut down nongovernmental organizations by turning Hungarian public opinion against them. It's the latest in a series of actions in recent months aimed at creating what Orban calls an "illiberal state."

May 25, 2017 • The people of Manchester, England, stood in silence Thursday to remember the victims of Monday's bombing. Police here are no longer sharing information with U.S. colleagues, following leaks to media.

May 24, 2017 • As more of the victims of Monday's suicide bombing in Manchester are identified, an intense police investigation into the bomber's background and contacts continues.

People In Manchester Remember The Victims Of Deadly Suicide Bombing

May 23, 2017 • The people of Manchester, England, have been remembering the victims of Monday's suicide bombing at the end of an Ariana Grande concert. The bombing killed 22 people and injured 59 more, police say.

People In Manchester Remember The Victims Of Deadly Suicide Bombing

Many Children Are Among The Dead In Manchester Arena Suicide Attack

May 23, 2017 • What appears to be the deadliest terror attack in Britain since 2005, took place Monday night. An attacker set off a bomb at a concert — leaving more than 20 people dead and more than 50 injured.

Many Children Are Among The Dead In Manchester Arena Suicide Attack

May 23, 2017 • Two German soldiers with far-right views, accused of plotting the assassination of public figures, sparked a probe of that country's military to see whether it's been infiltrated by the far right.

May 14, 2017 • Teachers and students at an American university in Budapest founded by investor George Soros are bracing for the worst after the adoption of a new Hungarian law that could close the institution.