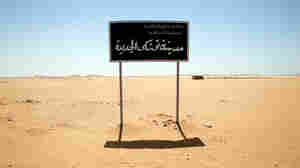 A sign on undeveloped land welcomes visitors to "New Toshka City." Toshka was to be a new settlement along the Upper Nile Valley, complete with enough jobs and infrastructure to support the relocation of 20 million Egyptians from polluted and over-crowded cities. Holly Pickett/Redux hide caption

July 10, 2012 • Fifteen years ago, Egypt's Hosni Mubarak embarked on a grand project to cultivate farmland in the desert and create new towns. But massive projects like Toshka in southern Egypt have languished due to mismanagement, corruption and Mubarak's ouster.

June 20, 2012 • Former Egyptian President Hosni Mubarak is said to be on life support after suffering a stroke in prison. Meanwhile, demonstrators are still gathered in Tahrir Sqaure protesting moves by the interim military government to seize power.

June 18, 2012 • In Egypt, Mohammed Morsi of the Muslim Brotherhood seems headed for victory in the presidential run-off election. But the latest announcements from the Supreme Military Council could strip him of most of his power.

June 18, 2012 • Over the weekend, Egyptians completed voting in their historic presidential election. The Muslim Brotherhood has declared its candidate the winner, but official results are days away.

June 16, 2012 • Egyptians began two days of voting to elect the nation's first president since the ouster of Hosni Mubarak. The polling comes days after an Egyptian high court dissolved the country's first freely elected parliament and the election now reflects the deep divisions in the country that has been unsettled since its revolution last year.

Battle For Power Coming To A Head In Egypt

June 15, 2012 • Controversial court rulings on presidential and parliamentary elections sparked protests Thursday. Many in Egypt worry that this brings to a head the battle for power between the country's ruling generals and the main Islamist party, the Muslim Brotherhood.

Battle For Power Coming To A Head In Egypt

June 12, 2012 • The presidential run-off in Egypt has deteriorated into a nasty debate over whether the country should have an Islamist government or a Mubarak-style regime. Each of the candidates is using scare tactics to draw voters to their side.

June 4, 2012 • Protests continue against the court rulings on former President Hosni Mubarak. A panel of judges sentenced Mubarak and his former interior minister to life in prison for their role in the deaths of protesters during the Arab Spring uprising in the country. But the panel acquitted six security officials linked to the shootings. 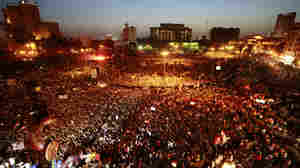 Egyptians gather at Tahrir Square in Cairo to call for a new revolution Saturday. A court sentenced ousted President Hosni Mubarak and his interior minister to life in prison, but acquitted six security chiefs in the deaths of protesters last year. Fredrik Persson/AP hide caption

Many See Politics, Not Justice, In Mubarak Verdict

June 2, 2012 • Crowds erupted with joy and anger Saturday after Egypt's former president was sentenced to life in prison for his role in protesters' deaths. Many Egyptians hoped Hosni Mubarak and his interior minister would face harsher sentences.

Many See Politics, Not Justice, In Mubarak Verdict

May 28, 2012 • Official results from the first round of Egypt's presidential election were released Monday. And, as expected, there will be a run-off between the two top vote-getters — Mohammed Morsi of the Muslim Brotherhood, and former Air Force Commander Ahmed Shafik, who was Hosni Mubarak's prime minister during last year's revolution.

May 24, 2012 • Voting in Egypt's first free presidential election wrapped up Thursday and ballot counting began. If no one wins a majority, the contest goes to a run-off next month.

May 24, 2012 • The first free presidential election in Egypt is in its second day. Thirteen candidates are vying to replace Hosni Mubarak. If no candidate receives more than 50 percent of the overall vote, there will be a runoff next month between the top two vote getters.

May 23, 2012 • The first day of voting is over in the unprecedented free presidential election in Egypt. No major irregularities were reported thus far in the election that continues on Thursday. Voters thronged polling centers across the country to cast a ballot.

May 23, 2012 • Egyptian voters go to the polls over the next two days to vote for president. There are 12 candidates but polls suggest the race is down to four men: two Islamists and two former officials in the regime of ousted President Hosni Mubarak. If no one wins at least 50 percent of the vote in the first round, a runoff will be held next month. 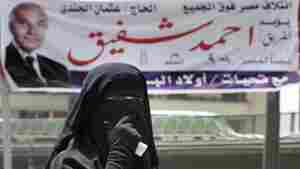 An Egyptian woman walks under a campaign banner in Cairo on Tuesday. Egypt holds its first competitive presidential election on Wednesday and Thursday, with a dozen candidates in the race. Amr Nabil/AP hide caption

May 22, 2012 • More than a year after its revolution, Egypt votes for a new president on Wednesday and Thursday. The race is wide open and none of the 12 candidates is expected to get an outright majority. If those forecasts prove true, a runoff will take place next month between the two top vote-getters.