In Gaza, A Day That Begins In Fear Ends In Cease-Fire Agreement

July 31, 2014 • The day began with Israel's military calling up 16,000 more reservists, stoking fears of a widening offensive in Gaza; it ended with a 72-hour cease-fire agreement between Israel and Hamas.

In Gaza, A Day That Begins In Fear Ends In Cease-Fire Agreement 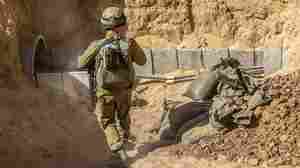 An Israeli army officer walks near the entrance of a tunnel allegedly used by Palestinian militants for cross-border attacks, at the Israel-Gaza border. A network of tunnels Palestinian militants have dug from Gaza to Israel is taking center stage in the latest war between Hamas and Israel. Jack Guez/AP hide caption

July 30, 2014 • Hamas militants are using tunnels in and out of Gaza to strike inside Israel. Israelis are questioning how the tunnels grew to be so complex and why the military hasn't been able to shut them down.

In A Complex Web Of Tunnels, Israel Draws Its Red Line

July 25, 2014 • Both the government and the people of Israel have been determined to continue the country's ground invasion in Gaza, despite a growing wave of international criticism. Israelis have been shaken by claims that Hamas has a heavily fortified network of tunnels leading from the Gaza Strip into Israel.

In A Complex Web Of Tunnels, Israel Draws Its Red Line

July 25, 2014 • The holy month of Ramadan comes to an end early next week with a celebratory feast, and Secretary of State John Kerry is hoping for a holiday cease-fire in Gaza. He proposed a seven-day truce. 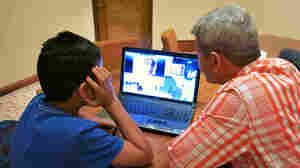 Palestinian Imad Abudayyah and his son, Ghassan, speak to relatives in the Gaza Strip via Skype from Ramallah in the West Bank. Israeli restrictions make it extremely difficult to travel between the two territories. West Bank Palestinians have largely been bystanders in the current round of fighting. Soraya Sarhaddi Nelson/NPR hide caption

July 23, 2014 • The West Bank and Gaza are less than 40 miles apart, and many Palestinians have ties to both places. Yet the current fighting has made it even harder than usual to stay in touch, let alone visit.

Israelis Shaken Over Deaths Of Soldiers

July 21, 2014 • In one Jerusalem suburb, some Israelis wonder whether the ground invasion will achieve the results they are looking for.

Israelis Shaken Over Deaths Of Soldiers

In Germany, A Case Against Another Alleged American Spy

July 9, 2014 • U.S.-German relations were further strained Wednesday over reports that prosecutors in Germany are investigating a German soldier accused of spying for the U.S. It's the second such case in a week.

In Germany, A Case Against Another Alleged American Spy 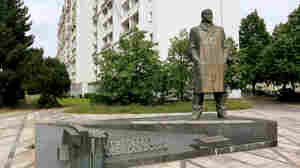 A statue of Soviet founder Vladimir Lenin outside an apartment complex in Schwerin, Germany. Erected in 1985, four years before communism collapsed in East Germany, it's believed to be the last Lenin statue in Germany and the town is divided over whether it should stay. The inscription reads, "Decree on land," referring to a Lenin manifesto that said workers were the real owners of the land. Soraya Sarhaddi Nelson/NPR hide caption

July 6, 2014 • East German communism collapsed 25 years ago. But the city of Schwerin still has a Lenin statue, believed to be the last one in Germany. The mayor says it should stay because you can't erase history. 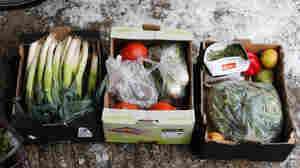 June 27, 2014 • Europeans throw away about 90 million tons of food each year. A new German website aims to ratchet that number down a bit by connecting people with leftovers to spare with people who could use them.

June 26, 2014 • As the U.S. and German soccer teams faced off under heavy rain in Recife, Brazil, German fans were glued to their TVs in Berlin. NPR's Soraya Sarhaddi Nelson offers their reactions to the German win.

June 26, 2014 • German and Russian relations are nearing an all-time low over events in Ukraine. German businesses do not want to punish the Kremlin and its supporters for fear it will damage the German economy.

May 27, 2014 • One of the founders of Hungary's far-right Jobbik Party has discovered he is Jewish, and that his grandmother is an Auschwitz survivor. Now, he keeps kosher, attends synagogue and visits Israel.

May 24, 2014 • Hungary's far-right Jobbik party is expected to win a quarter of the country's seats in upcoming EU elections. The country is also experiencing growing anti-Semitism that has Jewish leaders worried.

May 22, 2014 • The leading candidate in Sunday's presidential election is an oligarch. And the interim government is turning to other oligarchs to help restore calm in some crisis-plagued provinces.