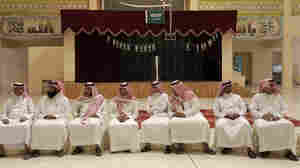 Saudi men wait to cast their votes in municipal elections in Riyadh, Saudi Arabia, on Thursday. Turnout appeared to be low. King Abdullah says that women will be allowed to vote in the next municipal elections, in 2015. Hassan Ammar/AP hide caption

In Saudi Arabia, Only Men Vote, And Not Often

September 29, 2011 • Saudi Arabia's King Abdullah has promised women they can vote in the next election. But on Thursday, it was still only the men who were allowed to cast ballots in municipal elections, and it appeared that few of them chose to do so.

In Saudi Arabia, Only Men Vote, And Not Often

September 29, 2011 • Saudi men are expected to cast votes Thursday in the kingdom's municipal elections. King Abdullah has promised that women can vote in the next election in four years, but that pledge has been overshadowed by the case of a woman sentenced to 10 lashes for violating the ban on driving. 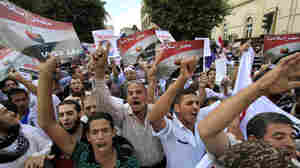 Egyptian demonstrators protest against the emergency law in front of the Interior Ministry in Cairo on Friday. The country's military rulers announced last week that the Hosni Mubarak-era measure would remain in effect until at least next June. Khalil Hamra/AP hide caption

September 26, 2011 • Critics say Egypt's military rulers are using the law, which allows for arbitrary arrests and harsh sentences, to impose their will. The government says it had no choice but to employ the measure after a mob attack on the Israeli Embassy earlier this month. 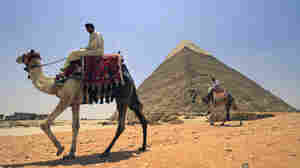 Tourist guides sit on camels as they wait for clients next to the Giza pyramids on the outskirts of Cairo, Egypt, June 23. Tourism in Egypt has dropped 35 percent overall in the first half of this year compared with the same period in 2010. Khalil Hamra/AP hide caption

September 22, 2011 • Revolution and tourism don't mix. Just ask the Egyptians. The tourism industry is crucial for Egypt's economic well-being, but foreigners have been staying away since the upheaval in February that ousted President Hosni Mubarak.

September 13, 2011 • The generals who rule Egypt say they will end military trials for civilians once the government ends emergency rule. That would come none too soon for activists who say six times as many civilians have been tried in military court this year than during Mubarak's entire 30 years in power.

September 7, 2011 • The trial of former Egyptian President Hosni Mubarak continued in Cairo Wednesday. Witnesses for the prosecution failed to connect Mubarak or his interior minister to the fatal shootings during protests that led to Mubarak's ouster.

September 7, 2011 • The trial of ousted Egyptian President Hosni Mubarak resumed in Cairo Wednesday. On orders from the judge, cameras and recording equipment will no longer be allowed in the courtroom. Witnesses for the prosecution have said Mubarak did not give orders to shoot protesters.

September 5, 2011 • Scuffles inside and outside the courtroom interrupted the trial of former Egyptian President Hosni Mubarak, which resumed Cairo on Monday. There was startling testimony from a police general who said there were no orders to shoot anti-government protesters in Tahrir Square.

September 5, 2011 • In Egypt, the first witness began testimony Monday after scuffles erupted inside and outside the Cairo court where former President Hosni Mubarak is standing trial. The 83-year-old leader is charged with corruption and ordering the killing of more than 850 anti-government protesters.

September 1, 2011 • Nearly all Libyans agree that security should be a top priority for the country's interim government. Some councilmen and rebel commanders say the first step to ensuring security will be to take away the light arms that both sides handed out en masse. 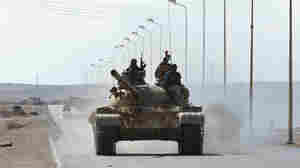 Libyan rebel fighters advance in their tank about 60 miles east of the town of Sirte on Tuesday. Sirte is Moammar Gadhafi's hometown and the last bastion of his loyalist forces. Eric Feferberg/AFP/Getty Images hide caption

August 30, 2011 • The rebel fighters have Moammar Gadhafi's forces pinned down in the coastal city of Sirte and say they have until this Saturday to surrender or face a rebel offensive. 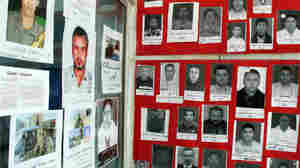 The walls of the Libyan Red Crescent office in Benghazi, Libya, shown here on Monday, are covered with photos of the missing. Some disappeared during Libya's revolution, but some have been missing for more than 10 years. Now, thousands released from Libya's prisons are being reunited with their families. Susannah George/NPR hide caption

August 29, 2011 • Those held in Libya's most notorious prisons, including political prisoners, have been freed. Some have been tearfully reunited with friends and family members. But others have not yet been heard from.

August 27, 2011 • Libyan rebels say they've secured most of Tripoli and taken a key border crossing to Tunisia. Members of the rebel council say they are moving from Benghazi to Tripoli, where they will set up an interim government to rule Libya into 2012. NPR's Soraya Sarhaddi Nelson brings us the latest from eastern Libya, where rebels are preparing an assault on one of the last strongholds of Moammar Gadhafi, his hometown of Sirte. 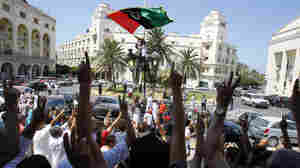 Libyans celebrate after prayers at a mosque next to the newly named Martyrs Square in Tripoli on Friday. Francois Mori/AP hide caption

August 26, 2011 • The Libyan rebels have largely subdued Moammar Gadhafi's forces. Their next challenge is setting up a government in Tripoli and returning life to normal in the battered country.

August 26, 2011 • In eastern Libya Friday, rebel fighters are expected to launch an attack aimed at Moammar Gadhafi's hometown of Sirte. It's a key pro-Gadhafi stronghold blocking the way between the rebels in Benghazi and the capital of Tripoli.