September 23, 2013 • Official election results confirm that German Chancellor Angela Merkel's conservatives have won — but they finished short of an absolute majority. The likeliest outcome is a Merkel-led coalition with the Social Democrats.

September 21, 2013 • Germany's government has not legalized gay marriage or adoption, a position that could cost it votes in Sunday's election.

Germany's Merkel May Need To Include Opponents In Her Coalition

September 20, 2013 • Angela Merkel is likely to win a third term in elections Sunday, but there may be a change in the makeup of her coalition government. It is possible that Merkel's main opponents, the Social Democrats, will be a major part of the coalition, and they would likely push for more stimulus measures to help struggling economies in the eurozone, rather than the austerity that Germany has demanded up until now.

Germany's Merkel May Need To Include Opponents In Her Coalition

September 20, 2013 • If she wins on Sunday, it will put German Chancellor Angela Merkel on the path to becoming the longest-serving female head of government in Europe. But the prospect of another four years with Merkel doesn't appeal to many Europeans outside Germany. 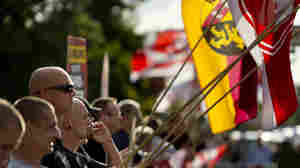 September 16, 2013 • As many as 5,000 Syrian refugees are moving to Germany this month, but they aren't receiving the warmest welcome in a country where a growing number of Germans are unhappy about the steady stream of asylum seekers. Fanning the flames are extremists, who want Germany to close its doors to refugees.

September 13, 2013 • There's no evidence that it appeals to voters, but a pair of politicians gave the cameras an upthrust middle finger this week. The German candidate tweeted a defense of his gesture, saying: "Straight talk doesn't always need words."

September 8, 2013 • Egypt's the military-backed interim president last week appointed a 50-member committee to help draft a new constitution. That committee — which includes only one of ousted President Mohammed Morsi's allies — meets for the first time Sunday in Cairo. Critics in Egypt say the new constitution is likely to be just as controversial as the previous one.

September 3, 2013 • Egyptian army attack helicopters fired missiles at suspected militants in the Sinai desert Tuesday. The military says at least eight were killed and many more wounded. The army is also moving to seal off the border with the Gaza Strip, and it's destroying smuggling tunnels that have been a major lifeline for Gaza over the past few years.

Egypt's Security Agencies Back, Now With A New Mandate

August 12, 2013 • Egypt's interior minister announced he is resurrecting much-hated security agencies that stifled dissent and helped Hosni Mubarak stay in power for three decades. They were a key target of protestors who forced his ouster in early 2011 and seemed to disappear from the scene for much of what's transpired in Egypt since. But as it turns out, they never went away and this time, have a popular mandate that many Egyptians fear is making them more dangerous than ever.

Egypt's Security Agencies Back, Now With A New Mandate

August 9, 2013 • The head of Egypt's armed forces who orchestrated the military coup that ousted President Morsi is revered by most Egyptians as a national hero. But many analysts there say it's doubtful Gen. Abdel Fattah el Sissi's popularity will translate into votes at the ballot box should he run for president next year.

August 7, 2013 • The military-backed interim government in Egypt says diplomatic efforts to resolve the stand-off with the Muslim Brotherhood have failed. The declaration has raised fears that the security forces may move soon against the sit-in camps, set up by supporters of ousted president Mohammed Morsi. 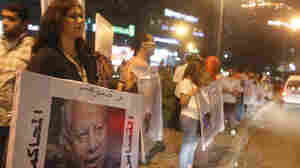 Activists from a group called "Third Square," which promotes a middle way in the rift between the Muslim Brotherhood and supporters of the army's overthrow of Egyptian President Mohammed Morsi, shout slogans as they gather to oppose both parties at Sphinx Square in Giza on July 30. Asmaa Waguih/Reuters/Landov hide caption

August 2, 2013 • Growing numbers of Egyptians are turning against the generals, politicians and youth group credited with sparking the popular groundswell that led to the ouster of President Mohammed Morsi less than a month ago. Some are joining Third Square, a new movement that's emerged as a result of growing discontent.

August 1, 2013 • Tensions are growing among the thousands of pro-Morsi supporters camped out around a mosque in eastern Cairo. The government has ordered the protesters to disperse, sparking fears of fresh bloodshed.