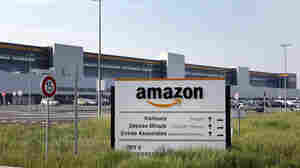 The entrance of Amazon's logistics center in Bretigny-sur-Orge, one of six Amazon facilities in France. Chesnot/Getty Images hide caption

April 15, 2020 • A French court ruled Amazon must limit deliveries to essential items while it assesses COVID-19 contagion risk at its facilities. The company decided to suspend all deliveries until April 20. 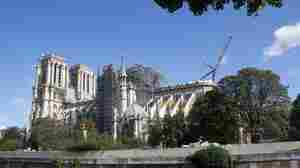 September 5, 2019 • Architects from around the world have flooded social media with their visions of a new Notre Dame. But 55% of French respondents say they want the cathedral to be just as it was before, a poll finds.

August 29, 2019 • There's a debate in France over whether to rebuild Notre Dame more or less as it was before, or come up with a new design to incorporate medieval and modern elements. 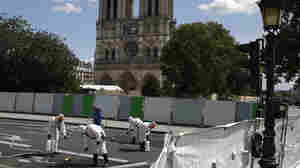 A cleanup crew scrubs pavement in front of the cathedral on Monday, after French inspectors said workers could return to the fire-damaged site to continue repairs. Francois Mori/AP hide caption

August 20, 2019 • Environmental and labor groups complain the cleanup should have begun sooner, and they are concerned about health risks in Paris.

August 11, 2019 • Reconstruction at Notre Dame Cathedral was suspended because of high lead levels in the area. Experts estimate melting windows and other structures sent tons of lead into the environment.

July 12, 2019 • French lawmakers have approved a tax on digital companies that will affect U.S. technology behemoths such as Google, Amazon, Facebook and Apple. The U.S. government is threatening to retaliate.

June 28, 2019 • Europeans are suffering under a heat wave. There are record temperatures in Spain, Germany and Italy. In France, the government has postponed school exams and limited the number of cars in Paris. 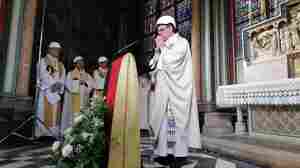 A small group in hard hats gathered on Saturday for Mass in Paris' Notre Dame cathedral. It was the first Mass since a fire devastated the church in April. Karine Perret/AFP/Getty Images hide caption

June 16, 2019 • A group of around 30 people wearing hardhats gathered for Mass in the cathedral on Saturday, exactly two months after a severe fire. The service was not open to the public. 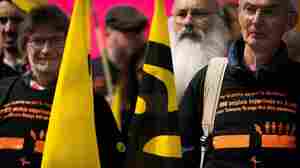 Union members gather in front of a Paris courthouse on May 6, as several former senior employees of the then-named company France Télécom go on trial for alleged "moral harassment," a decade after a series of suicides occurred at the firm between 2008 and 2009. Lionel Bonaventure/AFP/Getty Images hide caption

May 23, 2019 • Prosecutors accuse executives and managers at the former France Télécom of "moral harassment" or complicity during a major restructuring.

May 11, 2019 • Prosecutors have charged executives at the biggest telecom company in France with "moral harassment." Labor advocates say the work environment was so hostile, it was the reason for worker suicides.

March 30, 2019 • Algerians gathered for the country's largest protests yet against President Bouteflika's bid to run again for a fifth term.

December 13, 2018 • Police say they have shot dead the man they believe killed three people and critically injured six others in the French city of Strasbourg on Tuesday.

December 12, 2018 • A manhunt is underway in Strasbourg, France, after a shooter opened fire near the city's famous Christmas market. Authorities say at least three people are dead and 13 others wounded. 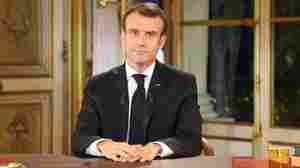 December 10, 2018 • In a speech on Monday, France's president declared "a state of social and economic emergency," offering some concessions to his critics. Among them, tax relief for the middle class and pensioners.

December 10, 2018 • French President Emmanuel Macron made concessions, including an increase in the minimum wage, to the "yellow vest" protesters, who have been disrupting daily life in France for weeks.