Brit Hanson (she/her) is a producer for NPR's science podcast, Short Wave. The podcast explores new discoveries, everyday mysteries and the science behind the headlines — all in about 10 minutes. She's produced episodes ranging from why some fruit ripens faster in paper bag to the dangers of tear gas during a respiratory pandemic and the evolution of HIV treatment.

Prior to working at NPR, Hanson was a freelancer reporter and producer, an editor at St. Louis Public Radio and a reporter and producer at North Country Public Radio. Her work has earned multiple Edward R. Murrow Awards, awards from the Associated Press and Public Media Journalists Association and the Public Service Journalism Award from The Society for Professional Journalists. Hanson is a proud alumnus of the Salt Institute for Documentary Studies. 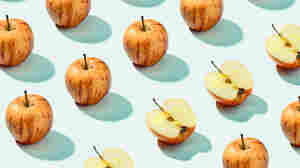 Apple cores are perfectly safe to eat, even though many choose not to. Cavan Images/Getty Images/Cavan Images RF hide caption

January 15, 2021 • Many folks eat an apple and then throw out the core. It turns out, the core is perfectly ok to eat - despite apple seeds' association with the poison cyanide. In today's episode, host Maddie Sofia talks to producer Thomas Lu about how apple seeds could potentially be toxic to humans but why, ultimately, most people don't have to worry about eating the whole apple. And they go through some listener mail. 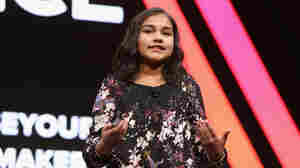 This Teen Scientist Is TIME's First-Ever 'Kid Of The Year'

January 11, 2021 • Fifteen-year-old Gitanjali Rao is a scientist, inventor, and TIME Magazine's first-ever 'Kid Of The Year.' She shares why she didn't initially think science was for her, what motivates her now, and a bit of advice for other budding innovators.

This Teen Scientist Is TIME's First-Ever 'Kid Of The Year' 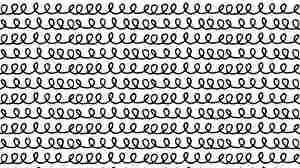 January 8, 2021 • Hair scientist Crystal Porter explains the science behind curly hair. (Hint: It involves mushy cells in teeny-tiny tunnels.) Plus, a bit of listener mail from you! Which you can always send by emailing shortwave@npr.org. 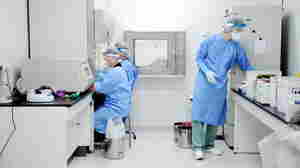 How COVID-19 Has Changed Science

January 5, 2021 • 2020 was a year like no other, especially for science. The pandemic has caused massive shifts in scientific research – how it's being done, what's being focused on, and who's doing it. Ed Yong of The Atlantic explains some of the ways, both good and bad, that COVID-19 has changed science.

How COVID-19 Has Changed Science 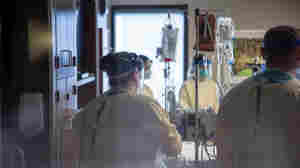 Nebraska Doctor: 'Don't Call Us Heroes.' Dig Deep And Do Your Part

December 3, 2020 • Like many states in the Midwest, Nebraska was somewhat spared during the early days of the pandemic. But now, the state has more cases per capita than any other in the country. We talk with two Omaha doctors who say this latest surge is exhausting health care workers, and one explains why she's tired of people calling health care workers heroes.

Nebraska Doctor: 'Don't Call Us Heroes.' Dig Deep And Do Your Part 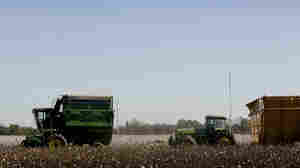 Too Much Of A Good Thing: The Cautionary Tale of Biotech Crops

December 1, 2020 • Some of the most popular agricultural biotech products are running into problems. These plants have been genetically modified to fend off insects, and have been great for the environment and for farmers. But now they are not working as well. NPR food and agriculture correspondent Dan Charles explains the rise and potential fall of Bt crops, and what happens when farmers use too much of a good thing.

Too Much Of A Good Thing: The Cautionary Tale of Biotech Crops 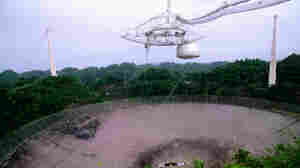 Since its completion in 1963, the Arecibo Observatory has played a key role in discoveries ranging from new insights into pulsars to detecting planets outside our solar system. John Elk/Getty Images hide caption

The Long Legacy Of The Arecibo Telescope

November 30, 2020 • The National Science Foundation recently announced it plans to decommission the Arecibo Telescope in Puerto Rico. The world-renowned telescope has suffered substantial damage this year. Today, we revisit our conversation with planetary scientist Edgard Rivera-Valentín about the unique role Arecibo has played in both scientific research and popular culture. (Encore episode.)

The Long Legacy Of The Arecibo Telescope 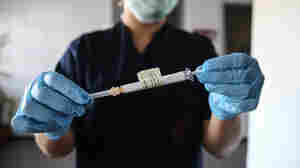 Who Gets The Vaccine First? And How Will They Get It?

November 16, 2020 • Developing a safe and effective coronavirus vaccine will be crucial to getting the pandemic under control. Also important, distributing it throughout the country once it's been approved. NPR science reporter Pien Huang tells us which high risk groups will get it first, how the vaccine will be distributed (including some challenges), and who's footing the bill for all of this.

Who Gets The Vaccine First? And How Will They Get It? 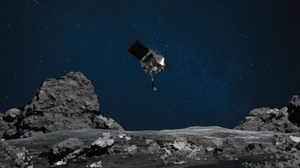 An artist's rendering shows NASA's OSIRIS-REx spacecraft descending toward the asteroid Bennu to collect a sample of the asteroid's surface. NASA/Goddard/University of Arizona hide caption

November 3, 2020 • A NASA spacecraft sent out to collect a sample of rock and dust from an asteroid has nabbed so much that it's created an unexpected problem. NPR science correspondent Nell Greenfieldboyce shares a cautionary tale of a scientific mission that was almost too successful. 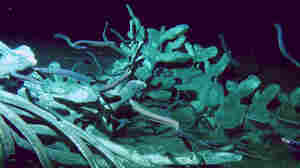 After A Whale Dies, What Happens?

November 2, 2020 • What happens after a whale dies? Their carcasses, known as "whale falls," provide a sudden, concentrated food source for organisms in the deep sea. Biologist Diva Amon is our guide through whale-fall ecosystems and the unique species that exist on these fallen whales. (Encore Episode.)

After A Whale Dies, What Happens? 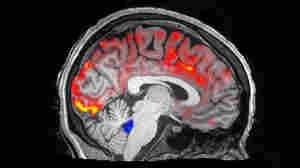 During deep sleep, waves of cerebrospinal fluid (blue) coincide with temporary decreases in blood flow (red). Less blood in the brain means more room for the fluid to carry away toxins, including those associated with Alzheimer's disease. Fultz et al. 2019 hide caption

October 29, 2020 • We know that people with Alzheimer's often have sleep problems. But does it work the other way? Do problems with sleep set the stage for this degenerative brain disease?