Ciera Crawford is a supervising producer at All Things Considered. She joined the show in October 2019 as the update producer who helps keep the show fresh for later feeds. Crawford previously worked at Westwood One News in Washington, D.C., where she worked as the overnight executive editor, and later as the morning drive assignment editor. There she wrote for anchors and hosts, assigned stories, pitched story ideas and edited copy, while producing special report coverage for big breaking stories such as the North Korea summits and the mass shootings in New Zealand and Las Vegas, as well as political stories including the 2018 midterms and 2016 presidential election. She is an alumna of Virginia State University. Outside the office, she enjoys sports (Go Celtics!), her four dogs and all things pop culture. 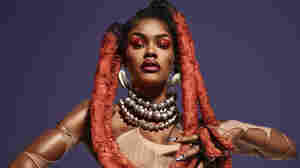 June 19, 2020 • NPR's Ailsa Chang speaks with Teyana Taylor about The Album, her anticipated follow-up to the Kanye West-produced K.T.S.E. that features guests like Lauryn Hill, Missy Elliott and Erykah Badu.