Telling The Story Of 'The Hardest Hit Unit In Iraq'

Telling The Story Of 'The Hardest Hit Unit In Iraq' 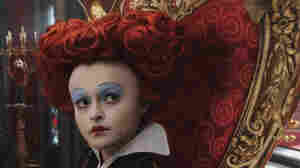 Helena Bonham Carter plays the Red Queen in Alice in Wonderland. Lewis Carroll once described the character as "a Fury ... her passion must be cold and calm — she must be formal and strict, yet not unkindly; pedantic to the 10th degree, the concentrated essence of all governesses!" Walt Disney Pictures hide caption