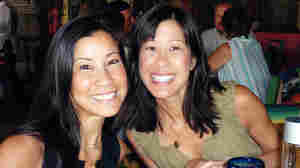 Lisa Ling (left) went on Larry King Live to plead for her sister Laura's release. She chose CNN, she writes in Somewhere Inside, because Kim Jong Il reportedly watches it in Pyongyang. Courtesy of Laura and Lisa Ling hide caption

When Work And Love Hit The Skids, 'Slow' Down

When Work And Love Hit The Skids, 'Slow' Down