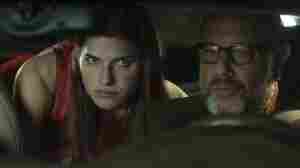 Both Lake Bell and Fred Melamed say they became interested in voice-over work because it didn't matter what you looked like. They play father and daughter voice-over artists in In a World ... Bonnie Osborne/ Roadside Attractions hide caption

In 'A World,' All Voice-Overs Are Not Created Equal

In 'A World,' All Voice-Overs Are Not Created Equal