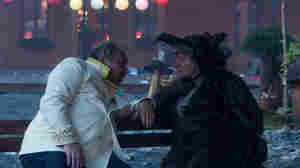 Spoor is a pulpy murder story that's also a utopian fable about feminism, social justice and ecology. The film, which was released in 2017, is newly available for streaming on The Brattle. Courtesy of Samuel Goldwyn Films hide caption

Fresh Air For Jan. 18, 2021: Documentary Exposes How The FBI Tried To Destroy MLK