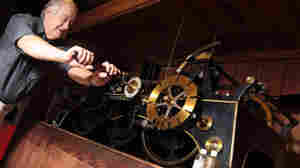 Paul Fisher, winds by hand the world's oldest continually working mechanical clock for the very last time on August 21, 2010 in Wells, England. The clock in Somerset's Wells Cathedral had been wound by hand since it was first installed in the 1380s. Matt Cardy/Getty Images hide caption

Fear Of The TwitterBook: When To Adopt Or Reject New Tech

August 30, 2011 • Culture sees itself and the cosmos as a whole through the lens of its technological capabilities. That fact may explain when adoption grows beyond mere choice. 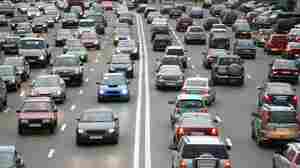 August 26, 2011 • Einstein taught us that time does not flow at the same rate for everyone. Highway relativity teaches us the same.

Searching For Intelligence In Space: A Brief History

August 23, 2011 • Is it reasonable to think that a true ETI signal is a century away if we put our noses to the grindstone? 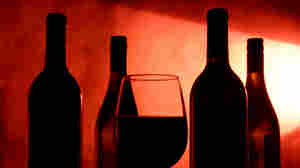 Addiction: A Disorder Of Knowing

August 19, 2011 • In addiction, we short circuit the normal relation between action and reward. Pleasure comes for free. But that makes for a dangerous pleasure. 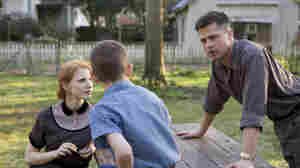 'The Tree Of Life': Need We Choose Between Grace And Nature?

August 17, 2011 • The Tree of Life, Terrence Malick's latest film, confronts some of the deepest questions of existence. Do we need to choose between grace and nature when facing loss?

July 30, 2011 • Baseball is a forensic practice. This is one source of its richness as a sport. And it explains why keeping score has such special meaning for the game.

How To Know If You Are A Crackpot

July 12, 2011 • For a topic that really gets people's hair to stand on end you might expect more coverage of science and religion in film.

The 5 Best Movies On Science And Religion

'Agora': Most Intelligent Movie On Science And Religion Ever

July 10, 2011 • This movie is a must-see for those interested in the history of science, the history of the science and religion debate and those who would like to see elliptical orbits explained.

Language Lessons With The Two Ronnies

July 5, 2011 • Can you write what you say? Not always. And this tells us something about language, writing, and their relation to each other.

Rise Of The Machines: Japanese Popstar A Computer Construct

June 24, 2011 • News flash: if there are cognitive differences between men and women, these probably have nothing to do with neurobiology.