Accessibility links
Search For A Final Theory: A Holy Grail? : 13.7: Cosmos And Culture How far can science go in constructing the final theory, the ultimate theory of Nature's building blocks of matter? Is it possible, or is it all a fantasy, inspired by old philosophical ideas? Perhaps it's time to move on and accept the world for ...

Search For A Final Theory: A Holy Grail?

Search For A Final Theory: A Holy Grail? 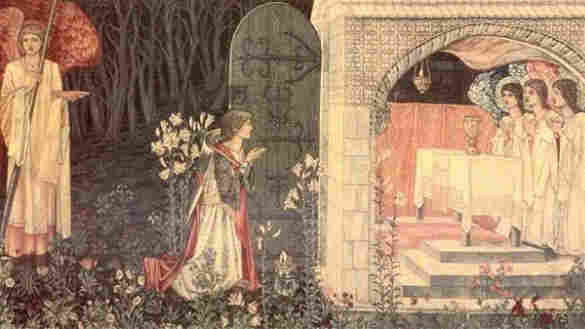 Visions of the Holy Grail: Is the search for final explanations and a Final Theory an impossible dream? William Morris/Wikimedia hide caption 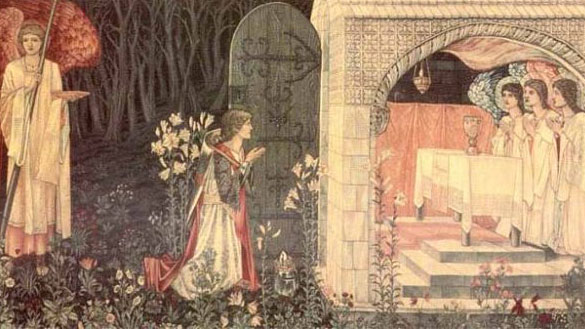 Visions of the Holy Grail: Is the search for final explanations and a Final Theory an impossible dream?

Imagine a day when humans arrive at a complete explanation of the ultimate building blocks of matter, the elementary particles that make up all that exist. (If they are particles...) This theory of theories, the embodiment of the reductionist dream, is known as the Final Theory. Can it really happen? Can fundamental physics develop to a point where this kind of complete description of material phenomena becomes possible? Or is the search for final explanations an impossible dream, a holy grail?

Isaiah Berlin, the great historian of ideas and philosopher from Oxford University, called ultimate explanations that involve statements such as "all is this" or "everything is that" the Ionian Fallacy. Berlin was referring to the Ionians, the first group of pre-socratic philosophers who lived in Ionia, a region of Ancient Greece now in the western coast of Turkey. There, in the merchant city of Miletus, Thales was the first to propose that all matter springs from a single substance, that is, that all matter is one. Thales proposed that that unifying substance was water, inspired no doubt by its uncanny ability to transform itself and to adapt to different environments and situations. Water is dynamic and is the essence of life, two things that fitted very well into Thales's belief that Nature was a dynamic, organic entity, forever in a state of flux.

This monistic description of Nature is at the essence of the belief in a Final Theory. To the Ionian concept, we must add Plato's conception of two realities, that of the world of the senses and that of the world of the mind. To Plato, truth was to be found only through pure thought. The senses were deceiving and could not be trusted. Only the mind, and especially through mathematical reasoning, could construct eternal truths, beyond the ephemeral nature of the material world, with its constant joining and dissolution. On the top of the chain sat the Demiurge, Plato's divine mind, the architect of reality. It is said that at the door of Plato's academy in Athens there was an inscription: "God ever geometrizes." This deity, the supreme mathematician and architect of the world, will eventually mingle with the Jewish-Christian God. By the Renaissance, to understand the world was to understand the "mind of God," a notion that is echoed frequently in our own days by many scientists such as Stephen Hawking and others, even if only metaphorically.

The goal of elementary particle physics is to obtain a description of matter in its most fundamental form. These indivisible bits of stuff have certain properties, such as mass and electric charge, and can interact via four forces: gravity, electromagnetism, and two that only manifest themselves at nuclear distances, the strong and weak forces. A Final Theory would unify these four forces into a single one, showing that, at very high energies such as those prevalent near the Big Bang, these four forces were one. As the universe expanded and cooled, this force would gradually split, until it became the four forces we know today: unification dissolves through cosmic history. At present, superstring theories are the best candidates for such unification, although they remain far from achieving this goal. Such theories actually go beyond the notion of elementary particles: the fundamental entities are wiggling strings of energy that move in nine spatial dimensions: as with guitar strings, different modes of vibration carry different amounts of energy, each identifiable with an elementary particle of matter.

Final theories of this kind would be the ultimate realization of the Platonic dream, the geometric construction of Nature from the bottom up. Can we really get there? If we represent all that we know as fitting inside a circle, what we don't know would fit outside. A Final Theory implies that there is no outside, at least when it comes to particle physics. (Such unified theories have nothing to say of complex phenomena, such as the weather, how the Earth appeared, or what is life.) The notion that we can actually get at the totality of knowledge is to me preposterous. (See also postings by my co-blogger Stuart Kauffman.) We can never know what's beyond, even if we may suspect it. There could be another force or forces, or completely unexpected phenomena lurking in the shadows of our ignorance. Nature is much smarter than we are. Another challenge is that a Final Theory, being derivative of the Platonic ideal, is based on mathematical symmetry: the hidden code of reality is structured upon a mathematical framework where everything is summed up into a huge symmetry operation. Problem is, we have no indication whatsoever that this must be so. What we see are asymmetries and imperfections leading the way to produce the structures of the world, from matter to life itself. It seems to me much more natural to let go of our dreams of a Final Theory and embrace the imperfection and uncertainty of it all. This way the world becomes our home, and what we do and the actions we take define our future. It's time we stop trying to embrace the mind of God and start embracing our limitations, accepting that we do the best we can to understand the reality in which we live.