Accessibility links
The Case For Solar Energy : 13.7: Cosmos And Culture The simple fact is we're running out of fossil fuels, so whether we like or it not, we have to turn to the sun.

The world consumes 15 terawatts of energy every year, around 80 percent of which derives from oil, gas, and coal. Assuming a continued two to three percent annual growth in consumption, the total world hydrocarbon reserves will be depleted by 2099.

So even if we ignore, which of course we cannot and must not, the perils of global warming and heartbreaking tragedies like the Gulf disaster, there’s another reality staring us in the face: At present rates, we’re very soon going to run out of the stuff. 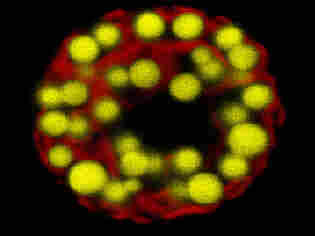 When you deprive Chlamy of nitrogen, it bloats up with triacylglycerides (TAGs) until it looks like a fat-guy cartoon. Here, the red is chlorophyll fluorescence and the yellow comes from a dye that fluoresces yellow when it’s embedded in TAGs. Ursula Goodenough/NPR hide caption

When you deprive Chlamy of nitrogen, it bloats up with triacylglycerides (TAGs) until it looks like a fat-guy cartoon. Here, the red is chlorophyll fluorescence and the yellow comes from a dye that fluoresces yellow when it’s embedded in TAGs.

But here’s another fact: The sun provides 86,000 terawatts of energy every year. That’s right: 15 terawatts extracted from fossil fuel; 86,000 terawatts provided via sunshine. The conversion of solar energy into useful forms could, in theory, solve the energy problem, and the solar industry is pulling out all stops to get that to happen.

That said, solar technology isn’t positioned to run the planet anytime soon, and battery-powered jet airplanes fly only in the realm of fantasy.

Meanwhile, it turns out that there’s a great way to make oil from sunshine. It’s called photosynthesis. Plants absorb sunlight and use the energy to convert atmospheric CO2 into organic products. Indeed, that’s how our current hydrocarbon reserves were generated in the first place: with the aid of geology, the ancient products of photosynthesis were crushed and converted into oil and coal.

Even better, though, many plants don’t need to wait for death and subduction to contribute to the planetary hydrocarbon project. Instead, they know how to use sunlight to convert atmospheric carbon into oil in real time. No, not the yucky crude they drag from beneath the seas. Stuff like olive oil, which works beautifully as diesel fuel and can fly jet airplanes.

To be sure, combusting olive oil to fly airplanes would release CO2 and contribute to global warming. However, since plants take CO2 out of the atmosphere to make themselves and hence to make the oil, the balance sheet is far more encouraging than the one we’re now looking at.

Most land plants don’t make oil except in their seeds; the CO2 they fix goes largely into making shoots and roots and walls and starch, material that can be converted into ethanol but not into oil. But there’s a diverse and abundant population of photosynthetic organisms, collectively called the algae, that can be induced to make the likes of olive oil, oil that can fly jet airplanes just fine.

So, full disclosure: About two years ago I started up some experiments in my lab that related to algal biodiesel, and they worked, and I now have funding from the Department of Energy to pursue these leads.  Having studied the sex life of a particular green soil alga, Chlamydomonas reinhardtii, all my research life, during which we made lots of cool discoveries that had no planetary impact whatsoever, it’s a trip to be asking interesting questions of Chlamy that are potentially also relevant.

When you deprive Chlamy of nitrogen, it bloats up with triacylglycerides (TAGs) until it looks like a fat-guy cartoon. (The image accompanying this blog shows this, where the red is chlorophyll fluorescence and the yellow comes from a dye that fluoresces yellow when it’s embedded in TAGs.])Same goes for marine diatoms: they all but burst with TAGs when deprived of silicon. Chemists can take these TAGs and readily convert them into transportation fuels. Better yet, the fat-extracted algae can be dried down and fed to chickens.

The algal biodiesel field is in its infancy. The solar industry is booming by comparison. There are daunting problems to be solved: how to grow enough cells and maximally elicit their TAG potential; how to protect them from the predators that make their way into cultivation ponds; how to harvest the TAGs. But there are also very smart engineers and start-up companies thinking hard about how to implement this potential source of fuel.

And there’s a wonderful aesthetic to it. Here’s the scenario: You put an enormous vacuum-cleaner-style hose on top of the stack of a coal-burning power plant, pass the emissions though pollutant filters, and then bubble the CO2 into an adjacent algal pond, perhaps derived from waste water, whereupon the algae obligingly turn it into fuel. The CO2 is prevented from going into the atmosphere as a greenhouse gas, and you get both olive oil and chickens.