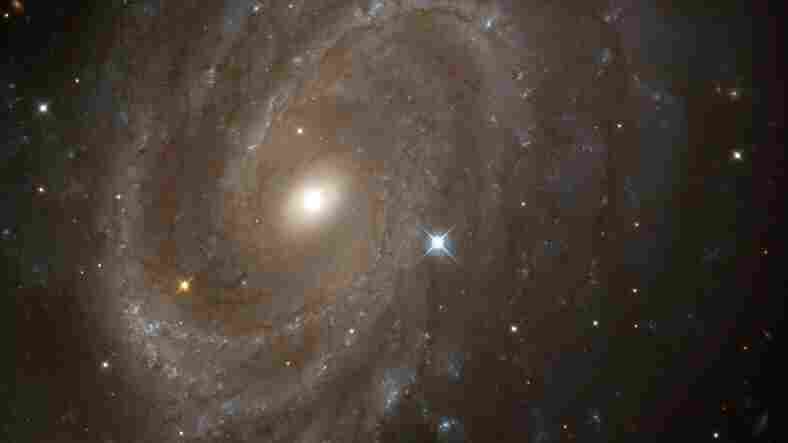 Using the Hubble telescope, it took NASA scientists eight years to get a measurement of the expanding universe. This spiral galaxy -- NGC 4603 -- was the most distant galaxy helpful to the study. Jeffrey Newman/NASA hide caption

Unfortunately for previous cosmological theories, the universe appears reasonably convincingly to be expanding at an accelerating rate. This, all physicists know, is no small problem. It is so severe that physicists now invoke "Dark Energy" to explain this accelerating expansion.

Here is the central problem: Throw a ball into the air. If you do so at less than the escape velocity from the earth's gravitational field, it will fly upward, exchange kinetic and gravitational potential energy until the two are equal at the top of its trajectory, then the ball will fall back to earth. If the initial velocity of the ball is just equal to the earth's gravitational field, the ball will "coast to infinity" ever more slowly, reaching infinity at 0 velocity, in the absence of other matter in the universe to provide additional gravitational fields. If the initial velocity of the ball is still higher, it will fly from the earth and coast to infinity at an ever decreasing, but finite velocity.

The Big Bang, well, Banged. To put the issue over-simply, vast energy arising from nothing became a quark gluon soup, became matter and fields containing energy, hence, by E=MC2, matter, as the universe expanded. The mutual gravitational attraction of all the mass and energy in the universe is supposed to forever slow the expansion of the universe. Given General Relativity, the universe should either expand then collapse in the Big Crunch, like the ball falling again to earth, it should expand forever to infinity reaching infinity at a zero rate of expansion, a critical state of affairs, or it should expand forever, but at an ever slowing but finite rate.

What the universe should not be doing is expanding at an accelerating rate.

But it seems to be.

Einstein made a "mistake."

He thought the universe was of constant size, and his equations did not predict this. He "fudged" and added the simplest correction term to his equations, the "Cosmological Constant." Using it, Einstein could achieve a universe of constant size. Hubble soon discovered that galaxies recede from one another in proportion to their distance apart and concluded the universe was expanding. Einstein admitted it was the worst mistake of his scientific life.

Einstein realized that his Cosmological Constant implied an increasing energy in the expanding universe, such that the vacuum energy per unit volume remained constant. This flies in the face of the Big Bang belief that all the energy of the universe came to exist in that Bang. Well, OK, so it does.

The problem is, there is, in a deep sense, no physics behind the Cosmological Constant, it is just a constant added the only place Einstein could in his equations and keep the rest of the physics of General Relativity unmodified.

Thus, the deep question is: What conceivable physical process(es) could constitute the Cosmological constant.

I am going to propose a related set of concepts that might do the job:

Taking the above non-mathematized schema of a physical a theory of Dark Energy as the cloning of space by space, the first thing to do is estimate the rate of cloning of space needed to account for the observed accelerating expansion of the universe. This is a relatively straightforward job.

The Real Line is a Real Mess. Best if space is discrete on some small scale.

One answer would seem easy: have a computer algorithm to compute each such number, like Pi, or the square root of 2, both of which are irrational, and then just form the sets.

Unfortunately, Alan Turing of the Turing Machine that is the basis of all digital classical and quantum computers today, proved that almost no irrational numbers were "effectively computable" using a Universal Turing Machine. So we cannot use this idea for our two sets.

The mathematicians, wishing to preserve set theory, postulated an Axiom of Choice asserting, well what the heck, that one can just go ahead and form the two sets.

Axioms are fine, but Turing tells us there is no effectively computable way to achieve the formation of these two sets for arbitrary choices of irrational numbers.

We don't need a continuum at that scale for classical physics.

On the other hand, if we remember that it is we who invented the idea of the real line and have learned to love it, this does not mean that the real line is the right description of reality. And it is filled with problems. As I said, the real line is a mess.

Then if we give up the real line, space must have a smallest length scale. The Planck length scale is the obvious scale. Then we get to Loop Quantum Gravity's tetrahedra, or some other minimal discrete units of space, avoid the continuous line, and with the postulates that these minimal units of space cannot interpenetrate, cannot expand, and can clone themselves we have the start of an exponentially expanding space. If we add energy per new unit of space and decoherence of quantum units of space, we get classical space and a constant vacuum energy. And if on 6A or 6B space tetrahedra can continue to clone themselves at some rate per unit volume of space we have Dark Energy.

There is as yet no matter or other energy in this space, of course, to add its mutual gravitational attraction to that of vacuum energy, as described by General Relativity, but given CLASSICAL SPACE achieved by the decoherence of quantum regions of space considered as "systems" into larger regions of quantum space considered as "environments, General Relativity seems safe.

This could conceivably constitute a theory, or part of a theory, of quantum gravity. The ideas could just possibly unite General Relativity and Quantum Mechanics. It seems worth thinking about.