Accessibility links
Battle Plan For A New World Order : 13.7: Cosmos And Culture The oil spill is forcing America to reevaluate where it stands in the battle for its own future. Will we reinvent ourselves and redefine our relationship with the planet? The alternative is unthinkable. 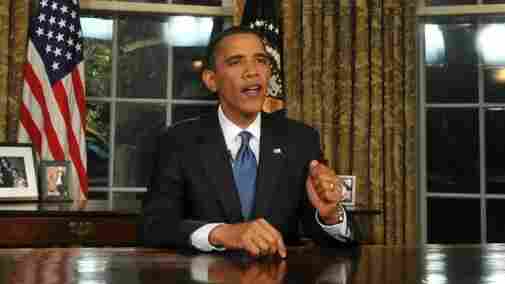 “Inaction is not acceptable.”

Those words came from President Obama last night, on his first address to the nation from the Oval Office. The tone of the speech was one of a battle cry. (OK, not in the anger of the intonation but in its content.) In the short term, the battle plan is to make BP accountable, creating a fund administered by a “neutral third party.” In the medium to long term, the plan is to rid America of fossil fuels, something that, as Obama reminded us, has been spoken about for a long time.

The question is how to achieve this.

You don’t have to be a strategist to realize that this represents a serious problem: if the nation needs oil to function and it doesn’t have it, it will do everything it can to get it. Everything. Hence wars with tanks and banks, hence almost 1,000 military bases abroad, hence the tentacles that spread worldwide to control what is clearly a very unstable situation.

Add to this the painful fact that most of the oil is found in countries with little to no sympathy for the US (and, of course, this antipathy is a consequence — among other things — of our interference in foreign policy to guarantee the oil supply) and you have a pretty explosive and unsustainable situation.

Something has to give.

It is high time we move into a new industrial revolution. You can call it the “green revolution” if you want. The name is less important than what it will do. And what it will, or must do is redefine our relationship with the planet. This revolution must start at the moral level and culminate in the technological implementation of a new world order. Nothing short of that.

We have now an opportunity to actually make this work. As I wrote last week here, the oil companies could have a huge new role to play in this, as the main sponsors of change. Obama implied that there is money to be made in the green economy, and lots of it. As the world population skyrockets and more join the affluent middle class, the appetite for energy will only increase. Thus, energy suppliers will have to serve many more people and their profits will increase. A power super grid, capable of integrating many different energy sources and distributing this power over large distances, the training of a new work force, from engineers and scientists to specialized technicians, the development of true fiscal incentives to switch from fossil fuels to green fuels, these are the necessary conditions for the new industrial revolution to take hold. Necessary but not sufficient.

People must be convinced. Obama gave a few examples of the great transformative power of American society when faced with major challenges. This is a major challenge for America. But America is not alone. This is a challenge for the world. The countries that first realize this (and Obama did mention China) will be way ahead of the game. The “American way of life” will not be American any more. That's not a bad thing. But it will be bad if we are no longer partaking in it.

I look at my four year-old son with an uneasy mix of optimism and despair. I see a new world for him, a world where human interactions with the planet will be mutually-reinforcing and not one-sided and parasitic. I wonder if my grandparents felt the same way, when faced with the deterioration of the world order due to fascism, optimism and despair.

Now, we all face the same enemy: ourselves.

Perhaps this ecological disaster will provide us with the will to change. I hope it will. For this war is between our past and our future. And it must be fought in the present.