Accessibility links
Science, Control and the End of Fish : 13.7: Cosmos And Culture Ecologies have been the shore on which the grand dreams of the last few centuries - our grandfather’s science - have run aground.

Inventing The Fish: Science And The Collapse Of Ecologies

Inventing The Fish: Science And The Collapse Of Ecologies 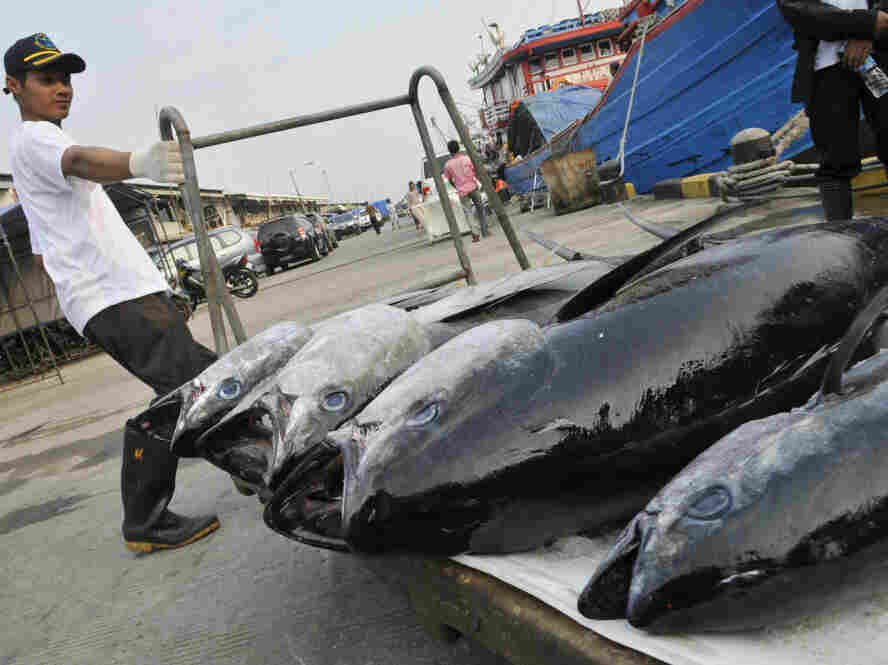 A worker in Jakarta, Indonesia, unloads a fresh catch of tuna for export to the U.S. and Japan. Romeo Gacad/Getty hide caption

“Can’t we just invent a new fish?” the kid asked.

I was teaching my Astro104 class –- “The Planets” -- and I always spend some time looking at the evolution of life on Earth.  I have come to see the class as a kind of lesson in Comparative Planetology in service of Sustainably.  I had just introduced the students to the 2006 report on the rapid decline in ocean biodiversity.  I was also showing them data on the collapse of ocean fisheries as scientist predict that almost none of the big “seafood” fish, from cod to tuna, can survive the industrial fishing practices adopted over the last half century.

The student in the corner had earnestly raised his hand and just as earnestly asked why we couldn’t just genetically engineer our way out of the problem.  We talked a little about the problems that could bring -– the law of unintended consequences surrounding genetic engineering.

His question, however, haunted me for some time for it exposes an attitude about science and society that the ongoing experience in the Gulf gives lie too.

Put simply: We believe that whatever the problem science will fix it.

This approach made sense in the run up through the industrial revolution where science and technology conquered space and time in the form of instant radio communications and jet planes that reduced ocean voyages to mere hours.  The life sciences vanquished one disease after another and helped us push to the limits of natural lifespan.  There was so much evidence all around us that the muscular application of science and technology could in fact save us from anything.

Slowly and painfully, however, we have learned the limits to that belief. It was hiding in plain sight in the one domain we barely gave thought to, a background that seemed both innocuous and invisible.

Ecologies have been the shore on which the grand dreams of the last few centuries -- our grandfather’s science -- have run aground.  Ecologies are the tightly woven fabric of biosphere, atmosphere, hydrosphere and geosphere.  They are the very essence of complexity -- a subject our grandfather’s science was ill equipped to imagine.   The myriad interactions, the thousand, thousand interdependent transfers of mass and energy, allowing ecologies of fish or bird or even plankton to thrive have not yielded to our control with the same completion as did electromagnetism or petrochemsity.  And now we will be the worse for it.

Our footprints have been heavy and we are now waking up to their consequences.  In this weekend’s New York Times Magazine, Paul Greenberg writes of the end of wild Tuna fisheries.

Tuna then are both real thing and a metaphor.  Literally they are one of the last big public supplies of wild fish left in the world. Metaphorically they are the terminus of an idea: that the ocean is an endless resource where new fish can always be found.  In the years to come we can treat tuna as a mile marker as we zoom past on our way towards annihilating the wild ocean or as a stop sign that compels us to turn back and radically reconsider.

The radical reconsideration Greenberg implies must be about more than wildlife or the environment or any potential politicizable tree-huggering sloganeering.   Built into the birth of modern science was an idea of control that on its face was not a bad thing.  In the last century, however, we have seen what slips from our fingers like sand when that control believes itself outside the ecology we are part of.  Just as ecology is a science, we as members of a scientific culture must see the aim of science in ecological terms.  Integration and not simply control must be our goal in what look like challenging years ahead.

I doubt we can invent a fish to replace all the thriving ocean ecosystems we ate our way through.  We do, however, have the opportunity to re-invent ourselves.  Not an easy thing but not impossible either.  Look at our long and extraordinary history -– it would not be the first time.