Accessibility links
Is Death A Disease That Can Be Cured? : 13.7: Cosmos And Culture If a pill were developed that cured aging and allowed you to live indefinitely, would you take it? 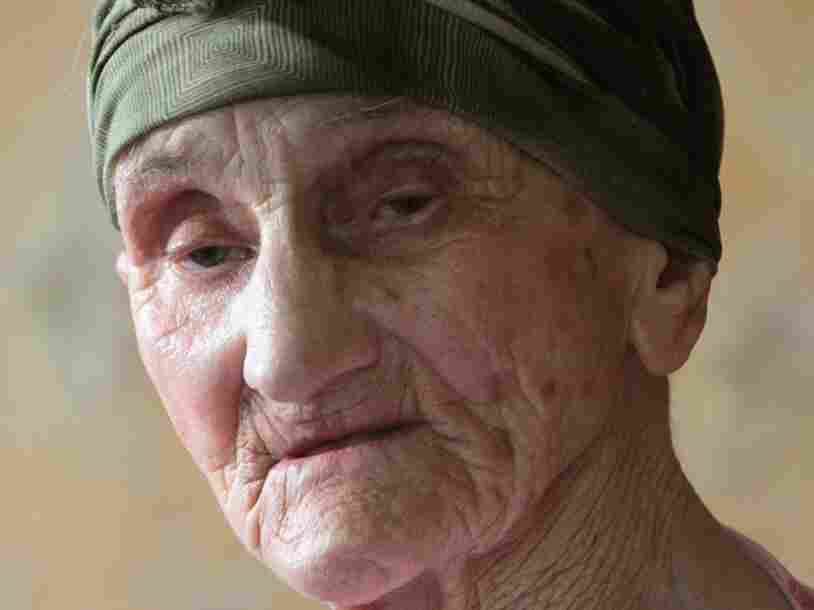 At 130, Antisa Khvichava is possibly the oldest person alive. Although some are working to conquer mortality, it's possible that there are set limits to human longevity. STRINGER/Getty hide caption

Concepts of human identity and meaning have always, and by definition, been framed in the context of human mortality. Most religious traditions, of course, suggest that a non-carnal or re-cycled life lies ahead, but they also suggest that the quality of that next life is contingent on how one lives one’s present life, so the framing persists. If you take a few moments to reflect on how you would visualize your earthly life if you knew it would continue forever, you’ll likely notice a number of perspectives start shifting around.

Living as we do today in the midst of biotechnologies associated with the health and reproductive sciences, we carry a heightened understanding of our bodies and brains and gonads as objects that depend on mechanisms that can succeed or fail.

Some have taken this ball and ran with it, organizing their worldviews around the belief that biotechnological intervention will somehow provide something along the lines of immortality.

An engaging, if sobering, piece in this context was published last week in the NYT Magazine, which tells the tale of a computer engineer who pays substantial monthly fees to a company called Alcor to assure that, at death, his head will be surgically removed from his body and frozen in cryoprotectants for future “reanmiation.” After all, as one site notes, “cryonic suspension is only the second worst thing that can happen to you.” The baseball player Ted Williams elected this procedure for his whole body, and the option is also in the cards for inventor and “futurist” Ray Kurzweil.

Kurzweil, in fact, hopes cryonic preservation won’t be necessary. His preferred route being to avoid dying in the first place. To this end, according to Wikipedia, he consumes 150 supplements (down from 250), 10 glasses of alkaline water (to neutralize acidic metabolic wastes) and 10 cups of green tea every day, drinks several glasses of red wine a week to "reprogram" his biochemistry, and is transfused with reprogramming chemical cocktails at a clinic each weekend.

To avoid dying means not only dodging disease bullets -- Kurzweil is intrigued by the concept of nanomachines that will travel through the body and repair cellular damage -- but also postponing or reversing the aging process itself, because most diseases take their mortal toll largely on the elderly. Taxpayers already support a National Institute on Aging as well as many university-based research programs wherein the normal lifespans of various experimental organisms, from worms to flies to mice, have been modestly extended via gene mutations, caloric restrictions, anti-oxidant regimes, and other regimes.

A website devoted to reporting outcomes of such “longevity science” also includes opportunities to join and support the Immortality Institute, the Methuselah Foundation, and so on. The message is straightforward:

Aging is an enemy. It saps our strength, cripples and eventually kills us. Yet there is a lack of information, advocacy and awareness of healthy life extension research, of initiatives aimed at the defeat of aging. Much of the general public thinks of aging as inevitable and natural, rather than as a medical condition that may one day be curable.

It is, of course, the case that the average human life span has increased dramatically of late thanks to the engineering of sewage systems, antibiotics, and major progress in the prevention and treatment of many diseases. But it’s also the case that there have been centenarians in the past and that there seems to be something like a 120-year natural limit, just as there are natural limits on the life spans of dogs and redwoods and all other kinds of multicellular creatures. As I noted last week, the soma did not evolve with immortality in mind; that’s the project of the germ line.

Some readers may find cryonic suspension and/or a “cure for aging” to be appealing. Others may raise political/economic concerns, noting, for example, that there are already too many humans anyhow, or that anti-aging interventions are likely to favor persons of financial means.

Here’s another way to put the matter: If a pill were developed that cured aging and allowed you to live indefinitely, would you take it? And if some persons were “on the pill” and others not, what impact would that have on our social fabric?

I confess that I find the whole trajectory to vastly miss the point of being alive which, I would say, is not how long it’s going to last but what it’s like to have it. Returning to the framing concept at the start of this piece, I think of my finite life cycle as a gift, or at least a gift by comparison with the dreary notion of endless existence. Its finiteness allows me to do my thing, make my mistakes, achieve my successes, love and nurture my family and community, run my course like every other critter, and then move out of the way.