Accessibility links
the strange and aching beauty of mathematics : 13.7: Cosmos And Culture Some people find beauty in pop stars; others in art and literature, but, argues astrophysicist Adam Frank, there is only one, timeless and beautiful, best mathematical equation ever that can stir the soul.

In The Eye Of The Beholder: Art, Justin Bieber And The Best Equation Ever

In The Eye Of The Beholder: Art, Justin Bieber And The Best Equation Ever 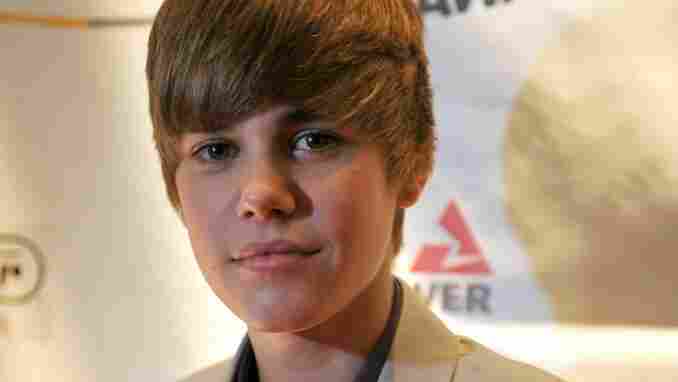 To some Justin Bieber is beauty, but to others there's nothing more beautifully perfect than Euler's Identity. Moses Robinson/Getty hide caption

At some point every year I find myself standing at the supermarket check out line perusing People Magazine's Most Beautiful People issue.  Every year my reaction is the same, something like "Justin Bieber, really?"

Beauty. It drives us crazy:  beauty in the human form; beauty in Nature; beauty in art; beauty in the solidified forms of architecture. And, for some of us, there is the strange and aching beauty of mathematics.

There are many ways to describe how mathematics can stir the soul. It's consideration is worth a lot of words.  For today I just want to provide one example for consideration to unpack the basic idea:

The best equation ever - the incomparable and glorious Euler's Identity.  Here is it:

Why are so many mathematically inclined folks sent into paroxysms of delight over this string of symbols which seem like gibberish to others.  Let me quote from Paul Nahin's wonderful Dr. Euler's Fabulous Formula: Cures Many Mathematical Ills:

I think [Euler's Identity] is beautiful because it is true even in the face of enormous constraint.  The equability is precise: the left hand is not "almost" or "pretty near" or "just about" zero, but exactly zero.  That five numbers each with vastly different origins, and each with roles in mathematics that can not be exaggerated, should be connected by such a simple relationship, is just stunning.  It is beautiful.  And unlike the physics or chemistry or engineering of today which will surely appear archaic to technicians of the future, Euler's equation will still appear, to the arbitrarily advanced mathematicians ten thousand years hence, to be beautiful and stunning and untarnished by time.

So to begin with, its the appearance of those five magic numbers that starts things off.  Let's go down the list.

Each of these numbers plays so deep a role in mathematics and therefore physics, engineering etc. that in and of themselves they draw out a sense of wonder. The power of 0 and 1 is obvious. But the other numbers appear again and again in the places you least expect it. That ubiquity makes the mathematical explorer draw back in awe. But to find all these numbers united in the single relationship that is Euler's Identity speaks to something even more powerful.

Finally, it is the apparent timelessness of Euler's Identity which makes the mind reel with a sense of delight.  Here are all these special, powerful numbers appearing together simply and elegantly in a way which can never be changed, never will change. It seems to point to something other than this lived world of half-truths and shadows. It seems to suggest that there is a realm of pure relation and pure reason where connections fold over and back on themselves.  The connections live in ways which can both be discerned by the mind and which appear to continue extending forever beyond the individuals particular horizon.  No wonder the Greeks from Pythagoras to Plato saw mathematics as a separate ideal realm of forms existing behind, below and apart from this world.

Euler's Identity is beautiful because it draws the same kind of very human reaction in its beholders as Monet's Water Lilies, a Shakespeare sonnet or (for some) a picture of Justin Beiber.  And yet it also speaks to something different that seems unique to mathematics.

So the question I leave you with is where does this beauty lie?  In our minds alone or somewhere "out there" as an eternal timeless form apart our failing sight?

(You can go here or here for a proof of the equation.)