Accessibility links
Why Do We Fall In Love? : 13.7: Cosmos And Culture Can science explain why we fall in love? And if so, what can we learn from it? 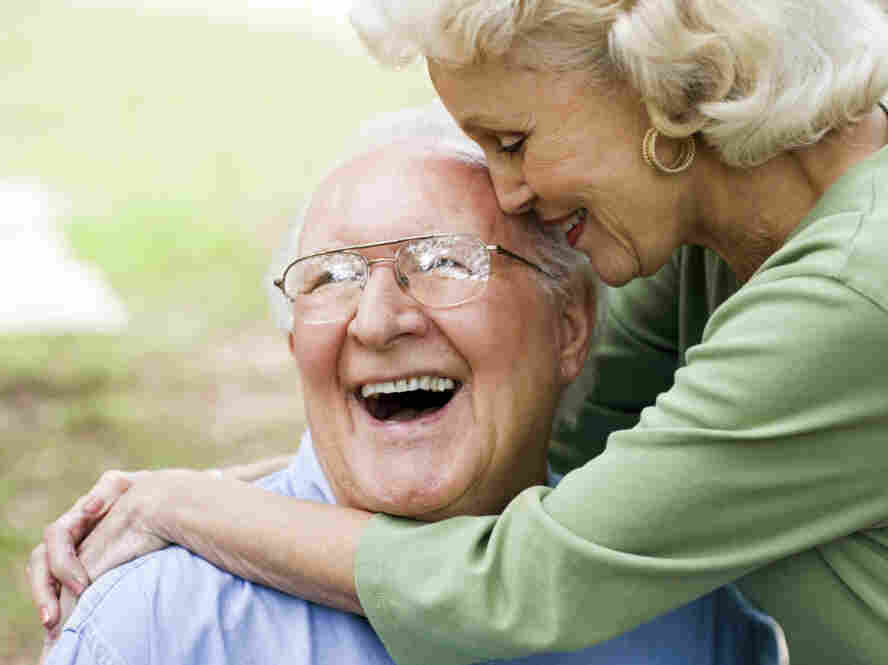 No, this is not a cheesy discourse into the complexities of heartbreak. What I want to touch upon today is the science of love, that is, if science can say anything about this unique feeling of elation that often makes reasonable people do unreasonable (good and bad) things.

There have been several studies of what goes on in the brain when someone is in love. A well-known one was performed by Helen Fisher — an anthropologist from Rutgers University, and collaborators in 2002-3. She has written many books and articles on the subject. Using functional magnetic resonance imaging machines (fMRIs) they analyzed more than 3,000 brain scans from 18 recently smitten college students. The images map blood flow in the brain. The idea is that whenever a certain part of the brain is active — the local neurons are buzzing — the flow of blood there is enhanced to supply oxygen. So, more blood means more action. Coupling this information with the specific details of where the action is happening, neuroscientists can actually pinpoint the most important chemicals being sprinkled during the activity spikes. In other words, the maps won’t tell you exactly what chemical is related to what feeling, but they can tell you what chemicals participate as the brain feels love.

The results were remarkable. As Fisher wrote in Time magazine

Many brain parts became active in our love-struck subjects when they focused on their beloved. However, two regions appear to be central to the experience of being in love. Perhaps our most important finding concerned activity in the caudate nucleus. This is a large, C-shaped region that sits deep near the center of your brain. It is very primitive — part of what is called the reptilian brain because it evolved long before mammals proliferated, some 65 million years ago. Our brain scans showed that parts of the body and the tail of the caudate became particularly active as a lover gazed at the photo of a sweetheart.

The caudate was inundated with dopamine originating in the ventral tegmental area (VTA), which is the mother lode for dopamine-making cells. Dopamine will induce the feeling of euphoria, hyperactivity, and sleeplessness; all trademarks of romantic love. Similar activity was detected in the region of the brain that becomes active when people eat chocolate. So, as long suspected, love is like a craving addiction. We now know why, at least at the chemical level.

The findings indicate that romantic attraction is an ancient biological drive, as are hunger and sex. The neurological core is very old, although in humans it achieves a high level of sophistication and diversity. Its role seems to be to sharpen the focus on a single mate. This may explain, for example, why women are traditionally more “romantic,” in the sense that biologically they must choose their mate wisely, given that they can only reproduce so many times in their lives, while men can be less selective. But I will refrain from going into the difficult territory of evolutionary psychology. In the final analysis, our sophisticated brains engender a sophisticated cocktail of emotions that ensures our species remains alive and reproducing.

There seems to be three stages of love: lust, attraction, and attachment, each with its own set of chemicals. Dr. Donatella Marazziti, a psychiatrist from the University of Pisa, demonstrated that the levels of serotonin in couples who are madly in love (we now know where the expression comes from) are comparable to people suffering from obsessive-compulsive disorder. So, also as long suspected, love is an obsession.

Of course, none of this explains why, when coming into a crowded party, you are more strongly attracted to only one or maybe a couple of people. Apparently, 55 percent of the attraction is a response to body language. (“The way she moves…”) 38 percent is the tone and speed of their voice. And only 7 percent is through what they say. (This actually explains a lot of the mistakes we make when falling in love and that we only come to realize much later…)

The experiments may link love to its primitive evolutionary roots but won’t take away its magic. At least for now, we can’t explain why when our eyes fall on that specific person the glands start pumping like crazy.

Love makes someone into someone special.

And it’s that someone special out there that makes all the difference in the world — for a short or a long time.