Accessibility links
Age Of Innocence: How Discovering Planets Is Like Losing Your Virginity : 13.7: Cosmos And Culture Something profound happens when age-old questions find answers. Astrophysicist Adam Frank says there’s a sense of loss yet also a sense that there’s even more to discover. He says it’s a lot like adolescence.

Age Of Innocence: How Discovering Planets Is Like Losing Your Virginity

Age Of Innocence: How Discovering Planets Is Like Losing Your Virginity 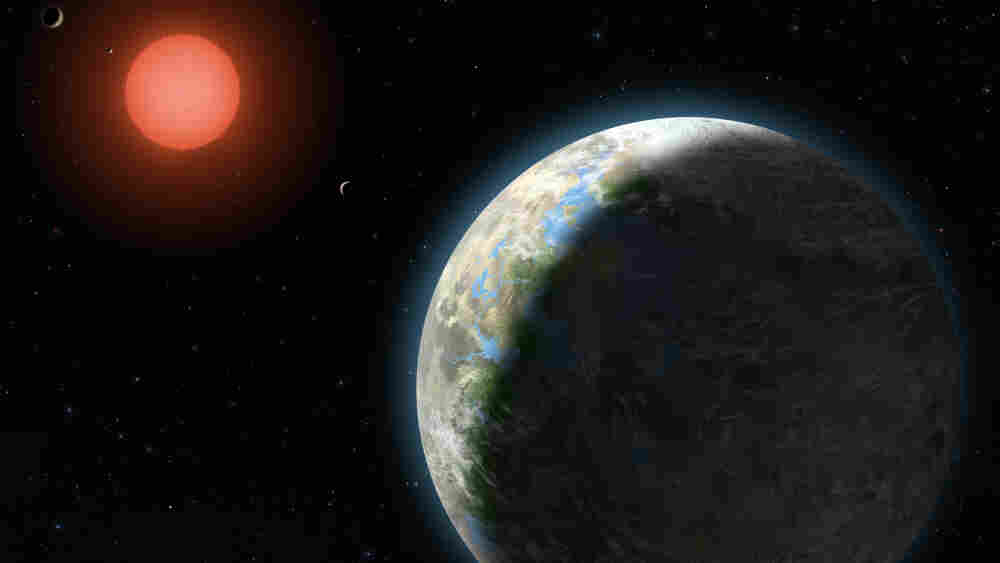 A National Science Foundation artist's drawing shows the inner four planets orbiting Gliese 581, a red dwarf star just 20 light-years from Earth. The newly discovered planet, in the foreground, has a 37-day orbit and, like Earth, is distant enough from the star for liquid water to exist. Lynette Cook hide caption

The Greeks did it 2,000 years ago. The Medieval Scholastics did it even though the Church told them not to.  They did it out in the open during the Renaissance but still got in trouble.

But we are past it all.

We have lost our innocence and have moved to the next level and on to even more exotic questions.

Last week, astronomers annouced the discovery of Gliese 581g, the sixth planet found orbiting the Red Dwarf star Gliese 581.   Unlike its five sibling worlds, the newly discovered Gliese 581g is a "goldilocks world" -- a planet right in the middle of the Brown Dwarf's "Habitable Zone."   Every star has a band of possible orbits around it, which define a habitable zone and the habitable zone is defined by the potential presence of liquid water.  On the inner edge of the zone, the planet's surface will be so hot that water will boil away to steam.  On the outer edge of the zone the water on the surface will forever freeze solid.

Because we believe liquid water is essential for life's formation, the discovery of Gliese 581g is a milestone, a crossing point.  We have found our first planet where life might have an easy shot.

But as important as Gliese 581g is, it is just another in a stunning series of questions answered about planets beyond our solar system.

These questions have been with us since our earliest forays into thinking about the sky, the stars and the wandering planets. The atomists of ancient Greece were convinced that the Universe was infinite and must therefore have an infinity of infinite worlds. In 1277 Bishop Tempier of Paris claimed that God could have created other worlds.  Many scholars were unconvinced and argued that even if He could, He would choose not too.  In 1600 Giordano Bruno was burnt at the stake for various heresies and it is likely that his advocacy of a plurality of inhabited worlds did not win friends with the Inqusition.  In 1686 Bernard Fontanelle's "Conversations on the Plurality of Worlds" explored the possibility of extraterrestrial life, turning it into something of an intellectual  seduction with the philosopher making his arguments in a late night garden stroll under the stars with a beautiful and intelligent noble woman.  In the modern era of 20th century astronomy, the discovery of even one extra-solar planet was a kind of holy grail and focused the efforts of many a scientist's career.

In the long encounter with this question of other worlds, we humans have been like a kid wondering about the adult world and its mysteries.  What is it like to kiss (ick!)? And how about sex?  How does that work? 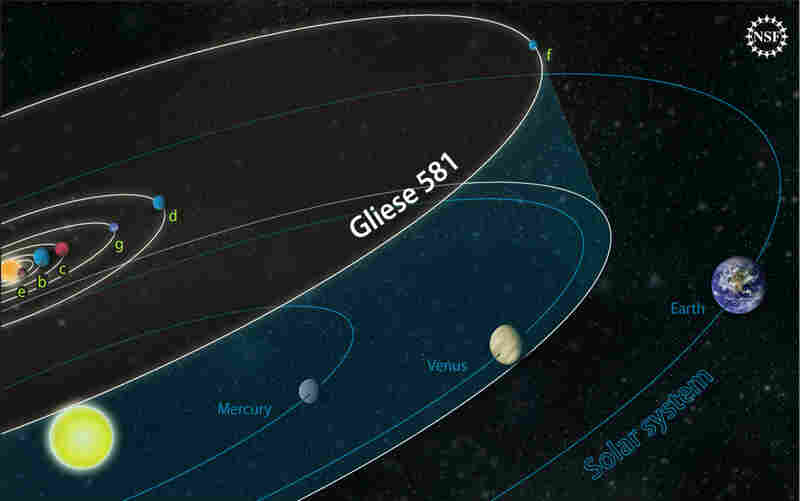 All of the planets orbiting Gliese 581 are nearer to it than the Earth is to our sun. Zina Deretsky/National Science Foundation hide caption 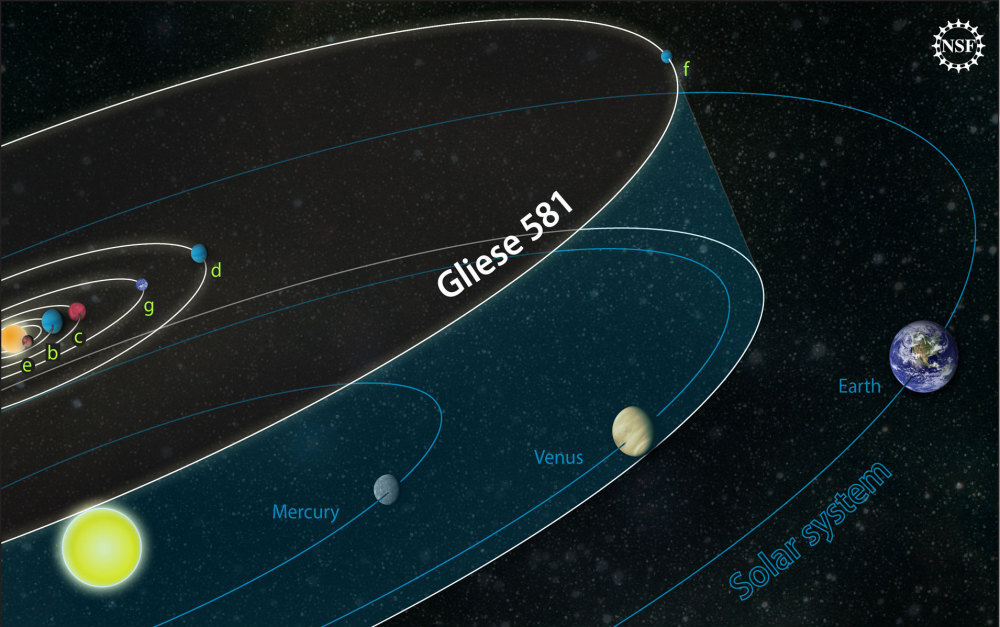 All of the planets orbiting Gliese 581 are nearer to it than the Earth is to our sun.

As children, these questions focus and shape so much of our life, particularly as we enter adolescence and we can feel our age of innocence coming to an end.  If you have forgotten this period for yourself, then consider all the teen movies where the focus points are who crossed that ineffable line and who has not.  That's us, as a species, when it comes to this ancient question.  We have crossed the line and now we know.

We are no longer innocents.

In 1995, just a mere 15 years ago, millennia of wondering ended with the discovery of the planet 51 Pegasi.  Suddenly, and after so many generations of not knowning, we knew: There are other worlds orbiting other stars.

In terms of solar systems at least, we were not alone. Since then progress has been swift.  More than 490 exo-solar planets have been found to date. So many that we can now begin the process of "comparative solar-systemology" (that's not really the term).   The first worlds we found were big, improbable Jupiter-sized planets in orbits smaller than Mercury's, then we found systems with architectures more like our own, then we started finding Earth-sized worlds.  Now we have found an Earth-sized world in its star's habitable zone.  Someday perhaps we will find evidence, through signatures embedded in light, of life on a planet.

But that is an answer still to come. What of the questions that are already answered?

What does it mean for us to answer -- definitely and completely -- a question that has filled the worlds of our ancestors with mystery and wonder?  Do we lose something in knowing?  Does the world become bigger or smaller?

I think the true beauty of science is that it does both. It answers our questions while immediately pointing to an enlarged Universe with other questions.

In our discovery of exoplanets, we have stepped across some line, just as in the future we may walk upon one of these planets we have so recently discovered. But like an adult looking back at their own time of innocence, we should not fail to note our transitions.