Accessibility links
Why We Matter: This Year's Nobel Prizes And The Meaning Of Life : 13.7: Cosmos And Culture This year's Nobel prizes celebrate human inventiveness. As we look for life in other planets, we come to understand how precious our planet is and how special we are. 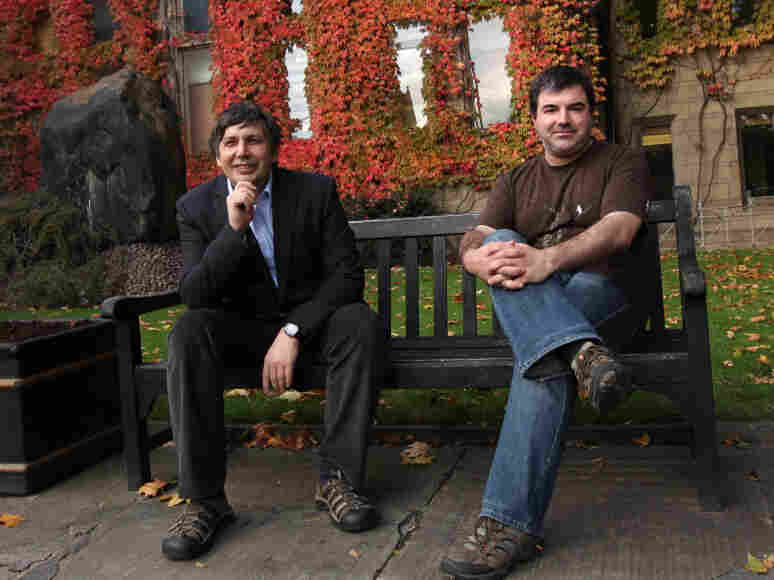 If you are a top-notch scientist with Nobel Prize aspirations, this is the week you don’t sleep well. The phone may ring in the middle of the night, and that voice with a thick Swedish accent may be on the other side, congratulating you. Or it may be your teenage son, stuck with a flat tire outside the local 7-Eleven. There's always next year.

The prizes were diverse. In medicine, Robert Edwards, from Cambridge University, received the prize for inventing in-vitro fertilization that brought babies (many of them twins) to women that wouldn’t be able to conceive offspring otherwise. Since Louise Brown, the first "test-tube baby," was born in 1978, more than four million people around the world owe their existence to Edwards's inventiveness. Due to his work, life's first steps, the fertilization of the female egg by the male sperm, lost some of its mystery to become a process amenable to human intervention. In Edward's words,

The most important thing in life is having a child...Nothing is more special than a child. [Patrick] Steptoe and I were deeply affected by the desperation felt by couples who so wanted to have children. We had a lot of critics but we fought like hell for our patients.

In physics, the prize went to Andre Geim and Konstantin Novoselov, both Russian and both now working at the University of Manchester. (This was a great year for British science, which, given the current threats of cuts, really needed the credibility boost.) They are credited with the creation of a new material called graphene, an incredibly thin -- one atom thick -- wafer of carbon atoms that promises to spur a revolution in electronics. In another, more playful, of Geim's works, he proved that magnetic fields could levitate frogs. Who said science is not fun?

Graphene is a somewhat magical material: stretchy, almost transparent, and yet as strong as steel, the wafers are excellent heat and electric conductors, just what you want in a variety of electronic circuits. Soon, they may be the key ingredient in flexible computer touchscreens and pollutions sensors.

The interesting part is how Geim and Novoselov discovered it. Starting with a block of carbon such as graphite from ordinary pencils, they patiently used Scotch tape to strip super-thin layers of carbon atoms. Being so thin, the material lives on the boundary of classical and quantum mechanics and can be used to study the weird properties of the quantum world. This is science at its best: playfulness and inventiveness that, together, may spearhead a revolution in technology.

In chemistry, the award went to Richard F. Heck, from the University of Delaware, Ei-ichi Negishi, from Purdue University and Akira Suzuki, from Hokkaido University, in Japan. They independently created a chemical process that efficiently links carbon atoms together, allowing for the synthesis of new cancer-fighting drugs, agrochemicals and coatings for electronic components. Their technique uses the metal palladium to catalyze (that is, speed up) the usually difficult and slow reactions that link carbon atoms into complex compounds. The technique is part of a long-dreamed goal of organic chemists, to be able to synthesize pretty much any molecule they can: molecular engineering from bottom up.

We now pause and reflect upon the discovery of the new planet Gliese 581g, reported by my esteemed co-blogger Adam Frank yesterday. Yes, the distant new world may harbor liquid water within a thin layer between its frigid and hot hemispheres. And yes, having water is always a must for life, at least as we understand it, carbon-based and metabolically efficient. On the other hand, if we take a good look around we see that our own cosmic neighbors are all barren worlds. If there is any kind of life in the Martian undersurface, or in the oceans of Europa, it will be very simple, unicellular. Odds are that the same will be true for Gliese 581g and most other Earth-like worlds we may find within the next decades.

Finding any kind of life in another world would be deeply changing. Life would gain a different dimension, and so would we. Few research topics are as fascinating, and we are lucky to be living in a time when we can actually probe into other worlds to see if there is any sign of life there. However, what we are also learning is how precious and rare our own world is: for offering the conditions for life to thrive here for the last 3.5 billion years and, from our perspective, for letting us evolve here. Seen from space, Earth is a precarious world, floating in austere blackness and radiation. We are here because our planet protects us with its atmospheric and magnetic blankets. That we evolved to the point of being able to use our brains to create life in a test tube, or materials that can reshape the world, is nothing short of amazing. If there is life out there, most probably it won’t be anything like us. Perhaps in a surprising way, the new science is teaching us something about the meaning of life. That we humans are a rare kind, with the ability not only to accept reality as it is, but to change it in myriad ways. Until -- and if -- we find another intelligent life form, we are it. As we search for life out there and try to solve the mysteries of matter here, we find ourselves strengthened by our power of inventiveness and, hopefully, wiser for it.